Editor's Note: A delegation of United Methodist bishops and mission staff visited China in April to strengthen existing ties with the Protestant church there. This third part of a UMNS series - The Church in China - focuses on who is filling the pews today.

Today's congregations, however, do not identify as part of the mainline denominations that built them decades or even a century ago. Most are registered through the post-denominational Three-Self Patriotic Movement that has represented Chinese Protestants since the 1950s.

Parishioners who returned when the buildings were re-opened in the 1980s after the Cultural Revolution are sharing the pews with new converts and, increasingly, young worshippers. Women are in the pulpit and taking on other significant leadership roles.

At some historic churches, membership numbers are in the thousands, not the hundreds. And, new Protestants church buildings are going up, some with government assistance. The total number of Protestant churches and meeting points in China exceeds 56,000, the China Christian Council says.

Beijing's, Chongwenmen Church, founded as Asbury Church in 1870, is one of the city's 21 Protestant churches.

The first to be built by American Methodists in northern China, Asbury was destroyed by fire during the Boxer Rebellion against Western influences in China, which particularly targeted missionaries and Christian converts. Rebuilt in 1904, Chongwenmen is distinctive enough to be classified as a "historical relic" by the Chinese government. 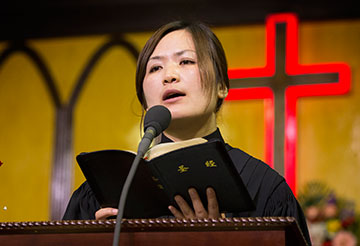 The church is part of the Hongou Hutong, a type of neighborhood configuration of lanes and courtyards representative of Beijing culture that has dwindled in the wake of new construction.

On the last Sunday morning in April, the church's compound - a cluster of buildings with an arched, castle-like entrance that enclose a central courtyard - is bustling. The second of the morning's services in Mandarin has ended and the 10:30 a.m. worship is about to begin. Korean worship is scheduled for 1:30 p.m., a class for "new believers" meets at 2 p.m. and the final Mandarin service is at 7 p.m.

Senior Pastor Liu Cuimin , who started her ministry at Chongwenmen in 1994, is part of a staff of 10 that is young and predominantly female. They attend to the fellowships for youth, women, and international believers, to Bible study and to prayer and spiritual growth meetings,

During the nearly 30 years since the church reopened, membership has grown to about 6,000. "We are living in a time that has been much blessed by God," Liu says.

International visitors are welcome. At the doorway to the sanctuary, a "consultation desk for foreigners" offers headsets for translation and copies of that day's order of worship in English.

Below the wood-paneled ceiling, two projection screens offer information on hymns and Bible readings, while a screen in an overflow room visible behind the choir allows the people sitting there to see the pulpit. Additional overflow space in the large basement brings the seating capacity to nearly 2,000. 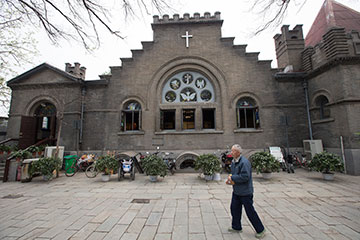 The historic Chongwenmen Church in Beijing, China, was established in 1870 by U.S. Methodists. Then known as Asbury Church, it was destroyed by fire during the Boxer Rebellion in 1900 and rebuilt in 1904.

The hymns, including "Blessed Assurance," are familiar. Pastor Liu Yan's sermon on "The Holy and the Worldly," stresses that "freedom and truth come from Jesus Christ" and advises humbleness and acceptance. A heart, just like a piece of land, can be rock hard or can be rich and fertile, she preaches. Treat people with equality and do not judge them, because only God can do that, she says.

In addition to established churches like Chongwenmen, some of the 100,000 registered Protestants in Beijing attend one of 500 meeting points, according to the Beijing Christian Council. Such groups usually involve less than 200 Christians who gather regularly for a service and preaching by volunteers, with the assigned pastor stopping by once a month.

From Methodist to post-denominational in Shanghai

Mu'en Church in central Shanghai also has its roots in Methodist mission work.

Originally established as Trinity church in 1874, it was rebuilt at the turn of the 20th century with funding from the Moore family of Kansas City and renamed Moore Memorial. As the congregation grew, a new building was needed and the gothic structure of today was completed in 1931.

The Rev. Shi Qiqui, who retired as Mu'en's pastor in 1998, was first sent by the East China Conference to Moore Memorial before the Cultural Revolution. He recalled its reopening on Sept. 2, 1979, for the "Shanghai Praise" video produced by the China Christian Council in 2006.

Shi arrived at the church at 2 a.m. that day and, within an hour, former members began to wait outside. "At 6 a.m., the church was opened for worship and many people rushed into the sanctuary, some weeping with joy," he said. "The sanctuary was packed with hundreds of worshippers." 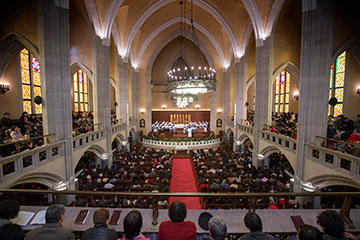 Parishioners fill the pews during worship at Mu'en Church in Shanghai, China.

The revitalized church took the name Mu'en, which means "abundant grace" in 1989. Today, the congregation is thriving, led by the Rev. Qianli Jiang, a female pastor.

Shi - who, as an experienced musician, was part of a commission that created the new Chinese hymnal - remains involved in church life, as does his 30-year-old granddaughter, Shi Meiying, who works for the China Christian Council.

Although she grew up in a religious family, Shi says she did not take her decision to be a Christian lightly. When she was baptized in 2005, she said, "It was my own choice."

She said she began to think seriously about her faith when she started high school and was invited by a teacher to take part in a course for pre-party members.

As a Communist Party member, she would be eligible for a nationwide exam to enter university. "For high school students, it's kind of a precious chance," she explained.

Because of her faith, Shi declined the invitation. Although the teacher asked her to reconsider and discuss the opportunity with her parents, she did not change her mind.

"I think God was always with me," she said. "I think my life is fully guided and controlled by him."

Young people new to the church may find regular worship services rather conservative, but separate fellowship meetings may draw them in, Shi said.

"They prefer to use a more relaxing or more contemporary style," she added. "That's also a more effective way to attract young people to the church."

At Mo Chou Lu Church, a former Presbyterian congregation in Nanjing, the 600 to 700 who attend the Saturday night service are mostly young, drawn to discussions of topics like work, marriage and social life.

The Gothic-style building, dating from 1867 and rebuilt in 1936, protected many people during the invasion of the Japanese Army in 1937 and was used as a printing facility for Chairman Mao Tse Tung's "Little Red Book" during the Cultural Revolution.

Saturday night's worship is just one of seven services a week that the nearly 5,000 members attend. About 300 are baptized each year at Easter and Christmas. To be baptized, a new believer must attend worship services every Sunday for a year and then apply for a preparation class.

"Many (members) are highly educated and they're actually becoming younger and younger," said Rev. Wang Xuefeng, one of five pastors on staff.