Editor's Note: A delegation of United Methodist bishops and mission staff visited China in April to strengthen existing ties with the Protestant church there. This first part of a UMNS series - The Church in China - focuses on the growth and growing pains of Christianity in recent decades.

Wang Jiawei knows firsthand the increasing demands being placed on the Protestant seminaries in China.

She's been a part of Nanjing Union Theological Seminary for the past 20 years, first as a student and then as a professor of systematic theology.

In recent years, the location has changed - the seminary moved from the center of the city to an expansive new campus in suburban Nanjing in March 2009 - as more students who have completed a secular university education decide to go on to seminary. Nanjing now has 361 undergraduate and graduate students.

The educational level of incoming students is becoming "higher and higher" and professors are straining to keep up. "The teachers need to know more," said Wang, who earned a master's degree from Trinity College in Bristol, England, in 2009.

The situation at Nanjing seminary points to one of the challenges facing the Protestant Church in China today - a lack of qualified teachers, a lack of capacity at its 21 seminaries and a lack of trained pastors to serve the burgeoning church membership.

As one of five officially-recognized religions in China - the others being Catholicism, Buddhism, Islam and Taoism - the number of Protestants has continued to grow since church buildings were reopened in the decade after the Cultural Revolution. A recognized leader in the creation and growth of the autonomous, post-denominational church is Bishop K.H. Ting, who died Nov. 22 at the age of 97.

Estimates of the number of Christians in China -which is the most populous country in the world with an estimated population of 1.3 billion - vary considerably. The China Christian Council, established in 1980 to oversee administrative, spiritual and ecclesiastical matters, says its official membership is more than 23 million. Some say the number of unregistered Protestant believers equals that figure.

Wang Jiawei (center) shows George Howard of the United Methodist Board of Global Ministries around the library at Nanjing Union Theological Seminary in Nanjing, China.

When the U.S. Commission on International Religious Freedom released its 2013 Annual Report April 30, China remained one of the eight nations listed as "countries of particular concern."

Among other issues, the commission's report cites significant deterioration of religious freedom for Tibetan Buddhists and Uighur Muslims; detention and arrest of independent Catholic and Protestant leaders, with the forcible closing of some churches, and the severe punishments given to Falun Gong and other groups considered to be "evil cults."

The report does recognize the fact that "millions of Chinese manifest their beliefs openly" and that senior government officials have praised the positive roles of religious groups in society, allowing expanded involvement in some charitable activities. "These are positive developments that were unthinkable just two decades ago," the report said.

Ken Guest, a United Methodist and professor and anthropologist at Baruch College in New York who has studied extensively Christianity in China, said ever-changing variables can have an impact on religious tolerance there.

"So much of it depends on the local officials and how well they interpret the national law and also what their personal relationships are with the religious practitioners," he explained.

The late 1940s and early 1950s, when the Communist Party was consolidating power, "was a time of intense unrest within the religious community" as Christians tried to assess their role in the new People's Republic of China. Many felt a need to become autonomous from foreign mission agencies and establish a local identity as Christians, he said, giving birth to the Protestant Three-Self Patriotic Movement.

"People made very distinct choices during that time," Guest said. 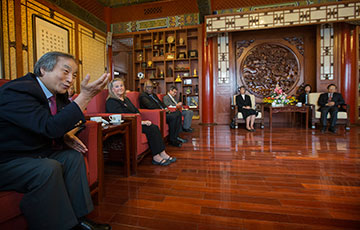 United Methodist Bishop Hee-Soo Jung (left) takes part in a discussion at the Chinese State Administration for Religious Affairs office. At right is Jiang Jianyong, vice minister of foreign affairs and Christianity for the administration. He is seated with Bishop Hope Morgan Ward and a translator.

While Christians in some independent churches may disdain or distrust their counterparts in congregations that are registered with the government, those leaders and the China Christian Council "are the ones who have been in constant negotiation with the state...to create policy that enables Christians to worship openly," he said. "They've carved out an official, legal space for Christians to function. There may be certain limitations that they accept as part of that process."

Guest pointed out that religious groups in the United States and other countries also must comply with government regulations on a number of issues related to their buildings, legal incorporation and employee taxes. Some of those regulations are not so different from what congregations in China must deal with, he added.

In his 2003 book, "God in Chinatown," Guest noted that "significant diversity" exists among both registered and unregistered Christians in China. Not all "house churches" are underground churches, he wrote, and registration regulations "define heresy in political rather than doctrinal terms."

When the Rev. Gao Feng, president of the China Christian Council, received a delegation from the Council of Bishops in Shanghai on April 22, he and council staff acknowledged that the post-denominational Protestant church in China is, "not a united church yet." Some small groups, such as the Seventh-day Adventists, stick to their traditional faith backgrounds.

Wisconsin Area Bishop Hee-Soo Jung, a member of the delegation, has visited China numerous times - both as a U.S.-based United Methodist bishop and as a South Korean theologian - and is excited about renewing a strong missional relationship with Chinese Protestants.

He believes China has a unique influence on the global Christian landscape because of its post-denominational nature and the control exerted by the government. 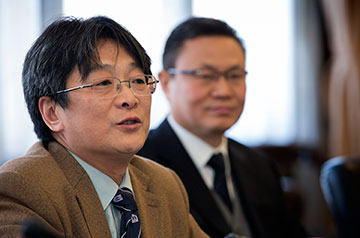 The Revs. Kan Baoping (left) and Gao Feng of the China Christian Council discuss relations with The United Methodist Church.

"Our partnership with the CCC is important because they are growing rapidly, even though there is a limit of constitutional boundary," Jung told United Methodist News Service. "Yet the Christian movement goes beyond any control, beyond any predicted pattern. It impacts on the whole society and the whole nation."

The United Methodist Board of Global Ministries, which plans to reopen a Hong Kong office in the near future, continues to recognize the China Christian Council and the Amity Foundation as key partners in China, said Thomas Kemper, the board's top executive, also part of the delegation.

But that does not preclude contact with other Christians. "We want to be clear it's not the only Christian presence in China," he stressed.

In a May 2008 interview with Christianity Today about the Sichuan earthquake, Franklin Graham talked about his interaction with the official Chinese church. "The government of China seems to see the value that the church offers and sees a role that the church can play in society," he said. "And each year, the church is gaining ground."

The China Christian Council does have relationships with some house, free or independent churches, said the Rev.Kan Baoping, the council's top executive, providing Bibles, hymnals and even pastors at times.

However, the council has no interest in maintaining outside relationships if it perceives a "hidden agenda" of reviving denominational ties to local congregations. Kan noted that the council severed relations with the Southern Baptist Convention in the 1990s because the convention tried to plant new churches.

Such actions seem to violate the "mutual respect" the council and Three-Self Patriotic Movement seek from overseas partners. Officials of the Chinese government's State Administration of Religious Affairs, which oversees the country's religion policies, reinforce the expectation of respect.

In an address during the Amity Foundation's "100 Millionth Bible Celebration" last November, Guo Wei, SARA's director for the department of foreign affairs, pledged continued support for Bible printing and distribution as well as communicating with overseas churches "on the basis of independence, equality, friendship and mutual respect."

Jiang Jianyong , Vice Minister of Foreign Affairs and Christianity, reaffirmed that message when the United Methodist delegation paid a formal visit in April to the government agency's Beijing offices in a 300-year-old palace where China's last emperor was born.

"I think the dialogue between your church and the Chinese church is very meaningful," he said.

The State Administration of Religious Affairs is providing guidance and assistance in the hope that China's religions will grow healthily, Jiang said, and have a positive input in the development of modern Chinese society. "We are trying our best to help the church to grow," he added.

Jung sees that happening as the China Christian Council continues to increase its autonomous mission activities. "They have enough freedom (to) constantly expand in mission and ministry, even in rural China," the bishop said. "I'm celebrating that because I see a lot of changes happening. I think that's probably the Holy Spirit's work."