After youth from the Greenville District of the United Methodist South Carolina Annual (regional) Conference had the chance to take part in a hands-on project at Youth 2011 to alleviate hunger, they knew they had to do it again.

Davis Crews, 13, a member of Advent United Methodist Church in Simpsonville, S.C., remembers the discussion on the bus ride home. "We just heard a call on our hearts to do a Stop Hunger Now packaging event in the district."

The result has been several tractor-trailers crammed with six-serving bags of rice, soy, dehydrated vegetables and a flavoring mix with 21 essential vitamins and minerals, including one tractor-trailer filled through a packaging event during the annual conference session in June.

South Carolina led the contributions from 10 annual conferences participating in meal-packaging events for Stop Hunger Now this year. In all, the conferences prepared 680,000 meals for distribution.

For Stop Hunger Now, the purpose of having meal-packaging events during annual conference sessions is more about "building this movement" than reaching a specific target, said the Rev. Steve Hickle, a clergy member of the North Carolina Annual Conference who serves as the organization's faith outreach director.

"It is kind of tricky to pull it off at an annual conference session," Hickle noted. "But it certainly raises the profile and has lots and lots of churches trying to engage as we go forward."

In South Carolina, the youth energized others. In 2012, what was planned to be a meal-packaging event for district youth evolved into a Great Day of Service event for the entire Greenville district. After filling a tractor-trailer with meals last year, the district repeated the effort in April. 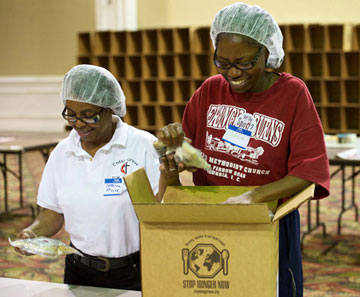 During one day of the annual conference session in June, three shifts of people - about 1,200 in total, including more than 500 youth -packed 285,000 meals into the 40-foot shipping container. The final shift was opened to youth from all around the state.

"We had more volunteers than we could have even hoped to have," Virginia Crews, the mother of Davis, said. "We stepped out on faith honestly really believing the money would come, but would the people come. And they did."

Having a meaningful service project suitable for all ages helps draw the volunteers. "When they can touch it and see it and watch the boxes stack up, I think there's a true grasp of the concept that 'we've done something,'" she explained.

Although providing a very basic meal, Davis Crews pointed out that Stop Hunger Now has worked with North Carolina State University to create a formula "so they get the biggest punch with that little bag of food."

The meal-packaging event was one of three conference-wide activities sponsored by the S.C. Hunger Project. More than 8,000 pounds of non-perishable food items also were collected for distribution to Harvest Hope Food Bank and other food pantries. Some local churches held hunger-relief efforts in solidarity.

By the end of the annual conference session,

"Our experience with the Stop Hunger Now reps is that they are fabulous," Virginia Crews added. "You provide them with the 25 cents per meal and the work force and they really take it from there."

While it's preferable for church leaders to contact Stop Hunger Now early in the year to plan events for annual conference season, Hickle pledges the organization will help on short notice if needed. "We've trained event facilitators all over the country who can be called in for events," he explained.

Putting together meals as a group can be fun, Davis Crews said, but even more exciting is doing so with the knowledge that the food is distributed at schools where students are in need. He is starting high school himself later this month and previously organized an event at his middle school.

"If you send these meals to school, children are more likely to come to school," he explained. "Therefore, the children can get an education and can help solve the poverty in their country."