United Methodist pastors should have their salaries set by annual conferences on a scale based on job performance and experience, which would reduce the salary disparity between Black and white clergy, said two researchers.

Currently, local church leaders set pastor salaries based in part on the wealth of their church.

The 12-year study, titled “Reproducing Inequality in a Formally Antiracist Organization: The Case of Racialized Career Pathways in the United Methodist Church,” showed that the current system results in Black ministers being paid substantially less in North and South Carolina. The authors of the study are David Eagle, assistant research professor of global health at Duke University, and Collin Mueller, assistant professor of sociology at the University of Maryland, College Park.

Eagle and Mueller also recommend that apportionments be used to spread the wealth among churches so that salaries are less connected to size, keeping in mind that current trends will lead to more small churches in need of leadership as time goes by.

“Church size is such a heavy determinant of salary, and people in small congregations just get paid way, way less,” Eagle said. “They don't have a path to salary advancement, which makes it really difficult for them.”

In North Carolina, more than 90% of United Methodist congregations are primarily white, while 6% are Black, according to the study. In South Carolina, 71% of churches are white and 27% are Black. Since there are more wealthy white churches than Black, the opportunities to pastor larger churches and make better salaries are more prevalent in white churches. 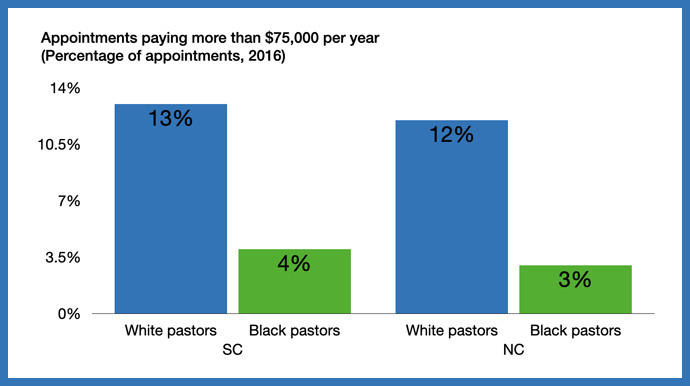 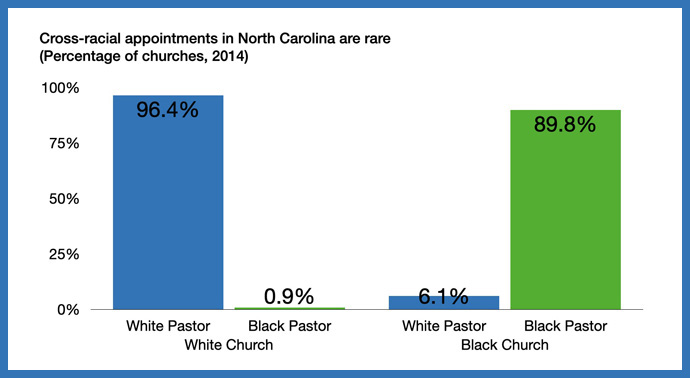 Data from a study by researchers from Duke University and the University of Maryland, College Park, shows inequalities between Black and white pastors in North and South Carolina when it comes to salary and appointments. Graphics courtesy of Duke University.

But cross-racial appointments aren’t common enough to challenge the salary disparity between white and Black pastors.

Despite denomination rules to the contrary, some predominantly white churches resist having minority clergy leaders, and vice versa, Eagle said.

White churches tend to be circumspect about their reasons for resisting the appointment of Black pastors, said Bishop Cynthia Moore-Koikoi of the Western Pennsylvania Conference, which was not part of the Duke study.

“Folks will say, ‘As a congregation, we would welcome a clergy person of color, but you need to know that our community might not be that welcoming to them,’” she said.

The children of Black pastors who are open to a white church assignment must also be considered, the bishop said.

“Clergy people, they make that decision to answer their call, but the children don't answer that call,” Moore-Koikoi said. “And they're going to have to go to school in places where it might not be welcoming or friendly to them.”

There is also resistance sometimes when it comes to appointing white pastors to Black churches, Eagle said.

“(A bishop or district superintendent) may not want to appoint a white pastor to a Black church because that Black church may have something unique and distinctive about being a Black church that they want to preserve,” Eagle said.

The church is subject to the same trends as other institutions, said Bishop Kenneth Carter of the Florida and Western North Carolina conferences.

“We do often mirror the economic stratification of the culture, and this is certainly racialized,” Carter said. “Even with significant resources channeled to training in diversity, especially among clergy, the realities persist.”

An equitable salary scale based on experience and job performance would allow those with the gifts to effectively pastor small churches to do so without financial hardship, Eagle said.

“Perhaps a church should be a place where what kind of standard business principles on how you pay people should maybe be questioned,” Eagle said, “and that people's calling should be considered more without salary as a barrier.”

In western Pennsylvania, more preparation for cross-racial appointments has been helpful, Moore-Koikoi said.

“In the past, we just worked with the pastor … about the things that they needed to do to assimilate and get along,” she said. “What we're doing now is we're working with the congregation, to make them aware of some of the cultural differences and biases that may or may not be present in how they receive their pastor.”

“I say this not in the spirit that this is a ‘fix,’ but that the equity gap in salary … is being addressed,” he said.

The Florida Conference has spent $14 million on equitable compensation over the past decade, Carter said.

“These are pathways at present, but they are not sufficient, or a resting place, or a cause for self-congratulation, and we need to pay attention to the discovery and development of additional ones,” Carter said.

Other conferences also have revenue sharing policies in place, but many of them only raise salaries to a minimum figure rather than make them competitive, Eagle said.

“I think they could expand the program,” Eagle said. “At least there's a system in place to share money between congregations, which isn't true in all denominations. There's probably a lot of human resources issues around how exactly you do that.”

Eagle noted that “Americans are always a little suspicious of … things that smell a little too socialist.”

“This goes against the overwhelming precedent amongst all denominations in the U.S.,” he said. “That can be a tough sell, doing the opposite from what everybody else does.”

Aging congregations and expensive buildings are plaguing many churches, but there is an upside. Church leaders are starting to get innovative about how their real estate is used, and that could be the road to a sustainable future.
Church Leadership

United Methodist leaders agree that big changes are coming as the denomination grapples with rising church disaffiliations. But disagreements remain on how best to balance financial uncertainty with missional commitments.