The first big conflict at John Street Church in lower Manhattan — celebrating its 250th anniversary this year as Methodism’s oldest continuous U.S. congregation — was whether to remain “downtown” or move to the “suburbs.”

It’s a familiar debate for American congregations of any religion. But the conversation at John Street took place nearly 200 years ago, reports the Rev. Jason Radmacher, the current pastor.

“As the neighborhood grew and became the financial center, it affected the church because by early 1800s, very few people lived in the area,” he explained.

At the time, the “suburbs” could be found at 14th Street and the fashionable, wealthier area around Union Square. But the congregation members who wanted to stay put based their argument on John Street’s history as the mother church of American Methodism and, Radmacher noted, “that argument won the day.”

The decision to stay on John Street permanently defined the church’s core ministry. “They really needed to see the neighborhood as their seven-day-a- week mission field,” he said. “It was going to be a little bit different than a Sunday congregation here.”

All United Methodist congregations and institutions have an impact on the people and places where they work in ministry. However, the Methodist presence in New York City has always been unique.

It also has changed over time, and with the times. This fall, the United Methodist Board of Global Ministries is vacating its long-time headquarters in New York for new offices in Atlanta and beyond.

But early in the 20th century, New York might have become “the epicenter” of American Methodism.

Before World War I, Radmacher said, as the south and north branches of the Methodist Episcopal Church discussed union, “one of the proposals was to actually build the headquarters for the new church here.”

The idea, which never came to fruition, was to build a tower on John Street, with the local church at the top and a cross visible from New York harbor. The merger of north and south, as well as the Methodist Protestant Church, ultimately took place in 1939. 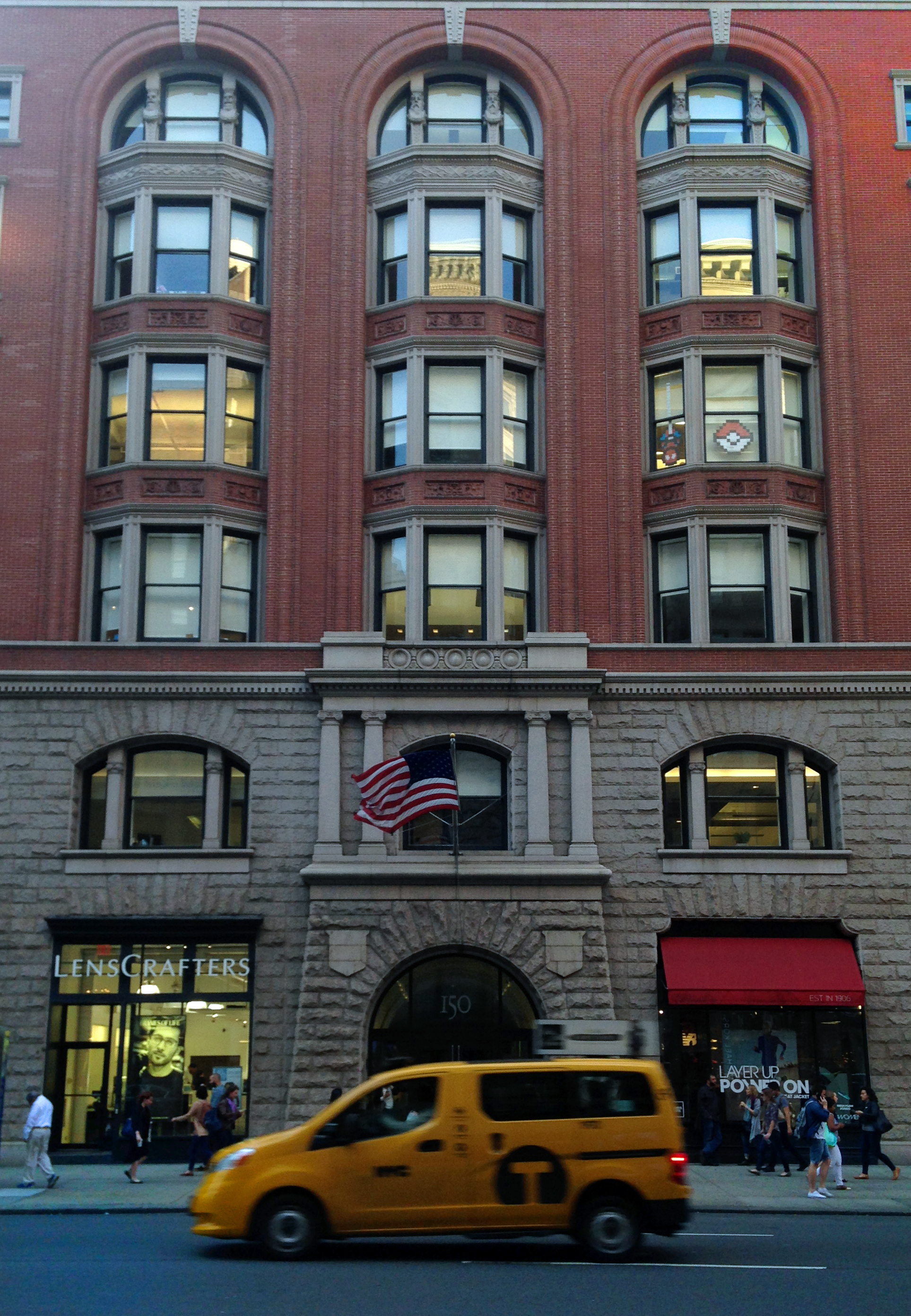 The former Methodist Book Concern building at 150 Fifth Avenue in New York, which once housed the Board of Missions, a predecessor body of the United Methodist Board of Global Ministries. Photo by Jack Sommer, UMNS.

Betty Thompson, who came to New York in 1950, soon found a position in the news office of the Methodist Board of Missions, located in the Methodist Book Concern building at 150 Fifth Ave.

In a recent interview, she described the section of Fifth Avenue from 14th Street to 23rd Street as a “Protestant Rome.”

Methodist Information, an earlier version of United Methodist Communications, also had an office at 150 Fifth Ave. The Presbyterians were across the street, the Baptists a block away, and when she took a new job, Thompson moved to the New York Office of the World Council of Churches across the street, at 165 Fifth Ave.

The mission board became one of the original tenants of the Interchurch Center on the Upper West Side when it opened in 1960, across from Riverside Church. When the Methodists merged with the Evangelical United Brethren Church in 1968, the EUB mission staff came to New York from Dayton, Ohio.

“We all dwelt in ecumenical harmony,” recalled Thompson, who had returned for a career with what became the United Methodist Board of Global Ministries. “It was kind of the heyday of the ecumenical movement.”

“All through the war, it was a loyalist congregation, including British soldiers,” he added. “A good part of this congregation ended up in Nova Scotia after the war.”

In the 19th century, the congregation opened a new building in 1817, followed by a third church in 1841 that exists today. Right before the civil war, the John Street congregation began holding its weekday services, Radmacher said, initially coinciding with a big revival.Early African-American members of John Street — including Peter Williams, sexton of Wesley Chapel, and James Varick — separated from the church in 1796, forming the beginnings of the African Methodist Episcopal Zion Church.

Fanny Crosby wrote the lyrics to her famous hymn, “Blessed Assurance,” while attending John Street in the 1800s, he noted. A church member composed the music. “What a great gift to be shared from this congregation to the world,” he said. “That song and that melody is just iconic.”

During his 13 years at John Street, Radmacher has learned from visitors and church records about the church’s World War II connection, a story not told in history books.

“There were probably more people married here during World War II than the 50 years before or the 70 years since,” he explained. The average was about three weddings a week, with most of the grooms listing the U.S. naval ship they were serving on as their address.

When Radmacher arrived at John Street in 2003 — at 27, he was one of its youngest pastors since the 19th century — the core of the congregation were people that had lived in the neighborhood before Sept. 11, 2001. The church sits two blocks from the World Trade Center site, but none of its members died in the attacks.

As the recovery at Ground Zero continued, New Yorkers began to move to the financial district, some with a “pioneering spirit” to support the rebuilding and others to take advantage of enticing rental deals, he noted. The rebuilding has been such as success — the streets cluttered with construction sites for high-end residential and commercial development — that some are priced out of the neighborhood.

Today, in keeping with its core mission, John Street continues its mission to those who inhabit lower Manhattan’s business hub. Attendance at the “Wonderful Wall Street Wednesday” noontime service is always higher than Sunday worship. “That has been the case since before the Civil War,” the pastor said.

This season’s Wednesday services started with 75 participants right after Labor Day and will average 120 to 150 each week throughout the year.

Even the church’s Bible studies and evening programs draw half or more of its participants from members of other churches who work in the neighborhood and come to John Street before commuting home.

“It seems it’s really tied to people walking on the street,” Radmacher theorized. “They walk by and they’re intrigued by the old building; something catches their eye.”

Just as transitions occur in the weekday congregation as participants change jobs or retire, the same phenomenon happens in the “Sunday congregation,” where worship attendance averages 70 people.

There has been a growth in families, but as the children grow older, those families tend to move elsewhere and new families move in. “Without ever moving myself, I feel like I’ve pastored about three different congregations,” Radmacher said.

The largest United Methodist conference in the U.S. announced it is blocking church exits as a result of “the misleading, defamatory, and false statements and materials shared with local church members.”
Church History