Veteran's Day, Nov. 11, is on a Sunday this year and many churches will be conducting special services to honor veterans but any day can be a good day to remember those who sacrifice so much.

The United Methodist Church offers many spiritual resources for veterans and their families that can be used year-round. In January, United Methodist Communications will be one of the sponsors for America's Sunday Supper, which will focus on supporting military families.

Strength for Service has been a resource and comfort for soldiers and their families since 1942. After Sept. 11, 2001, United Methodist Men took over support of the project. . The devotional is for armed forces personnel and was written for use during World War II and the Korean conflict. The book was updated and reprinted in 2002 thanks to Evan Hunsberger, an Eagle Scout, who found his grandfather's worn copy and made it his mission to get the book updated and republished.

Soldiers like SPC Michael Levine, Second Brigade Combat Team, Fourth Infantry Division, recently wrote a note of thanks for the book he received:

"The daily devotional, Strength for Service, was a life-saver for me during my deployment in Afghanistan 2011-2012. They brought me closer to God and my fiancée back home, as we shared each daily devotional together."

For use on any occasion to honor veterans, the Board of Discipleship offers: 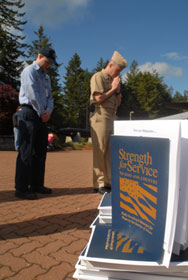 United Methodist Men actively strives to supply a copy of the devotional "to every man and woman serving in the U.S. armed forces worldwide."

The United Methodist Board of Higher Education and Ministry has an endorsing office that approves and supports United Methodist pastors called to be military chaplains. Chaplains from all the armed forces have written stories and resources for families who have loved ones fighting far from home.

Some of those resources include:

Learn more about other ways in which The United Methodist Church provides support to military families.