When the Rev. Jörg Niederer decided to plan a spiritual pilgrimage, he bypassed the more popular European destinations of Rome and Assisi in favor of the founder of his United Methodist faith.

His journey by foot this summer — an estimated 1.5 million steps or 1,050 kilometers (652 miles) — will lead the United Methodist pastor from his home in Frauenfeld, Switzerland, to the gravesite of John Wesley, located behind Wesley’s Chapel in the Islington section of London.

The idea of walking through Switzerland, Germany, France, England and possibly Belgium and Luxembourg does not seem daunting to a man who does not own a car, is a member of a hiking club and already walks between 30 and 50 miles each week.

“I am a passionate pedestrian,” he declared.

Niederer, who will be 58 in August, planned the trip as part of a three-month sabbatical. He will finish his appointment as the District Northeast Switzerland superintendent for the denomination’s Switzerland-France-Northern Africa Conference on June 30 and begin his pilgrimage the next day. 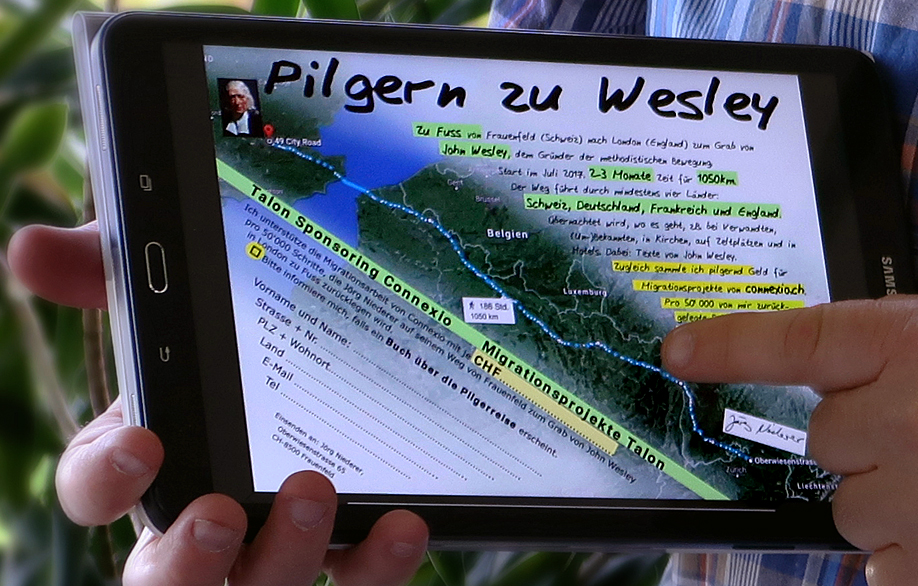 He also is linking his fondness for a good walk to assisting refugees and migrants through voluntary pledges for Connexio, the conference’s mission agency. He hopes to raise at least U.S. $15,000 to $20,000.

“When I organized my journey to London, I didn't think about sponsoring,” he said. “Then, I remembered that millions of people in the world do their journeys not for fun, but instead they are forced to leave their home because of hunger and war, and go on dangerous ways and with little hope to places where they are often not welcomed.”

Niederer — who has served as the chairperson of Connexio’s migration working group for the past four years and previously was a director of the United Methodist Board of Church and Society — will keep track of his daily distance online and post photos, statements and observations along the way.

In a June 7 Facebook post, Niederer reported he had nearly 100 people pledging to his walk so far and noted that “every step taken by me on the way to London will bring 1 Rappen, the same as 1 Swiss cent, to the migration work of Connexio Switzerland.” He is taking pledges until July 1.

According to its website, Connexio “promotes global relations through the exchange of information, persons, material goods, insights and ideas,” working with partner churches and communities in Africa, Asia, Latin America, Central Europe, the Balkans, Switzerland and France.

“The partners involved support each other in spreading the gospel in word and deed, in the mission and diakonia,” the website says.

Niederer knows how to go the distance. When he first became a district superintendent, he took daily walks from one church to another in his district, eventually racking up more than 310 miles. 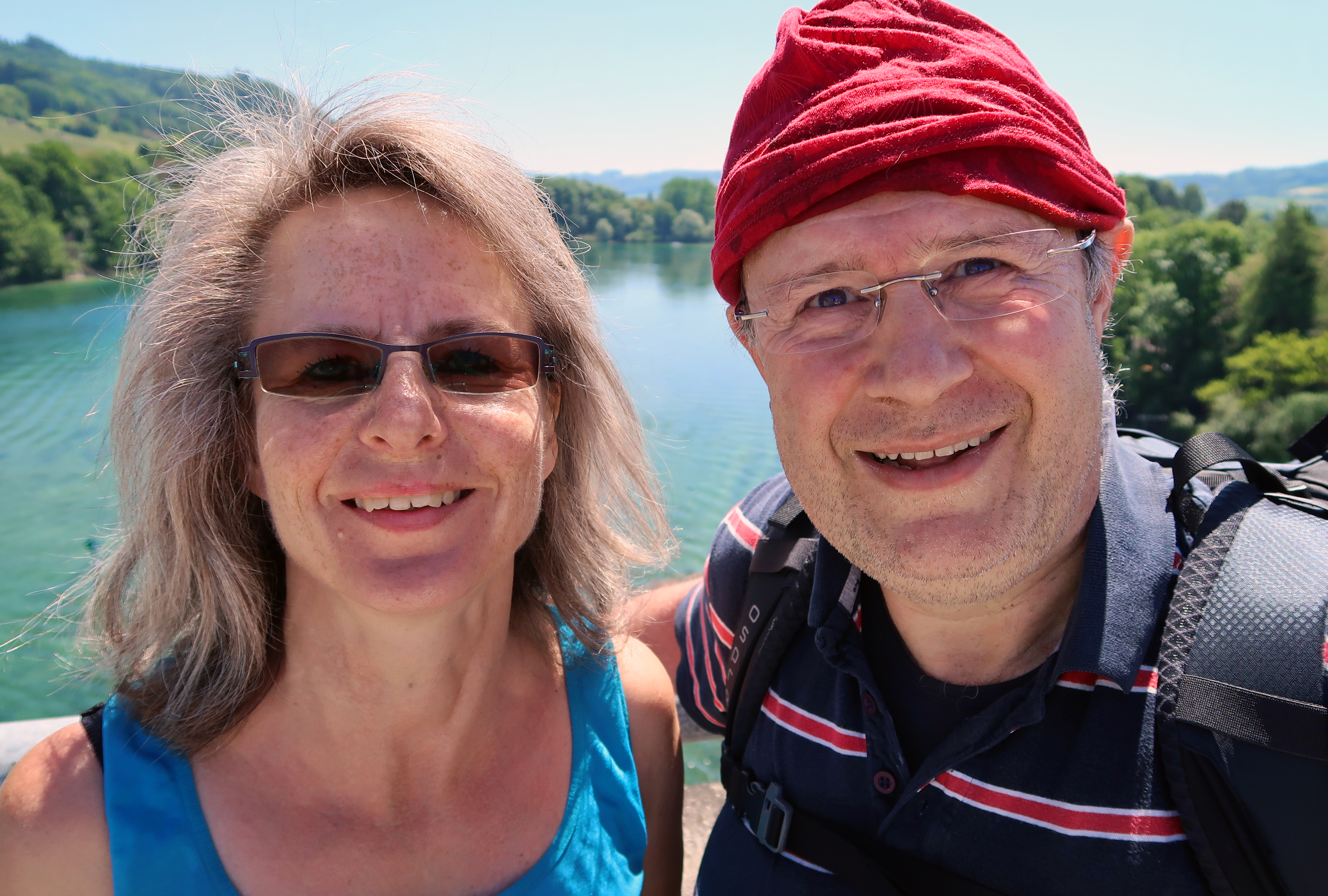 Jörg Niederer stands with his wife, Sabine Möckli Niederer, at a point over the river Rhein near the historic city Stein am Rhein, Switzerland Photo courtesy of Jörg Niederer.

However, he admits, there are physical hurdles for this trip. “For me, the pilgrimage to London will also be a challenge in another way,” he explained, mentioning the “starting arthritis at both of my feet and on the left hip.”

His 13-kilogram backpack will include clothes, a tablet, a tent and a small water purifier. He will carry a cell phone, smart watch with pedometer and a hiker GPS.

Even allowing for a two-week break for a holiday with his wife, Sabine, Niederer expects to arrive in London at the beginning of September.

He currently is exploring sleeping arrangements for the pilgrimage, which will begin with stays with Methodist friends and relatives and likely include a mix of accommodations in church facilities, campgrounds, youth hostels or bed-and-breakfasts.

While there will be beautiful scenery, rivers to wander along and historic sites to visit, Niederer also will have the thoughts of John Wesley to accompany him. He will carry Wesley’s diaries and a book written by retired United Methodist Bishop Rueben P. Job, “40 Days with Wesley.”

Niederer said he loves Wesley’s General Rules — doing no harm, doing good and attending upon all the ordinances of God — and the Wesleyan works, “The Character of a Methodist,” “Thoughts Upon Slavery” and “The Almost Christian.”

Wesley’s book, “Primitive Physic, or, an Easy and Natural Method of Curing Most Diseases,” also is a favorite.

In October, when Niederer returns to his pastoral duties, his next appointment will take him to St. Gallen, a city that includes a local Korean United Methodist congregation with worshippers from more than 10 different countries. “I love this global dimension of the UMC,” he said.

He plans to write a book of his own. “My book about the pilgrimage will follow the quadrilateral of John Wesley: experience (Switzerland), Scripture (Germany), reason (France) and tradition (Great Britain),” he explained.