Walking across a dark campus at night now is safer at the Nyadire United Methodist Mission, thanks to recently installed solar lights.

Through a five-year partnership between the United Methodist mission and Engineers Without Borders USA, the lighting project improves security for the campus and the community.

Nyadire Mission includes a hospital, primary and secondary schools, a teachers’ college, orphanage and other services.

Retired engineer and United Methodist Drew Harvey of Pennsylvania said the project grew out of The Nyadire Connection, a faith-based, nonprofit organization that seeks to support and sustain the Nyadire Mission.

He said the collaboration started with student Maddie Gioffre, who traveled to Nyadire twice with The Nyadire Connection team while she was in high school.

He said discussion with Nyadire Mission followed, and the first project to light the pathways without depending on electricity began.

The team raised about $50,000, and in September 2017, a system of 24 solar streetlights was installed along major pathways used by Nyadire students. 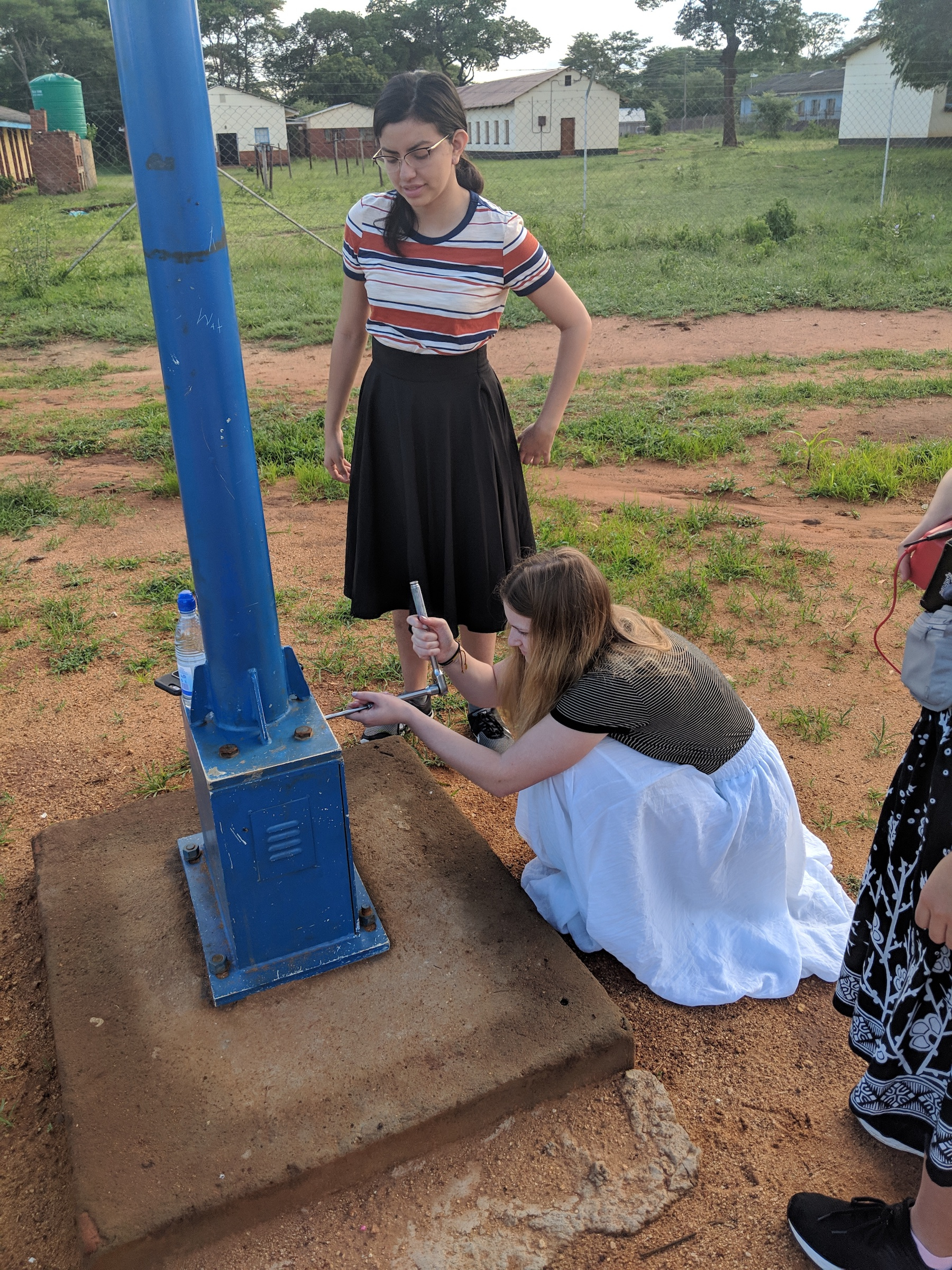 “We interviewed students and people who live nearby,” said Cathy Fang, a project leader for Engineers Without Borders, “and received a lot of positive feedback. Not only do the lights provide safety to students walking back to their dorms, but also when electricity is out, students sometimes sit under the lights to do their homework.”

The Nyadire Mission provided 5 percent of the capital funds, as well as housing, food and transportation for the Pittsburgh students while they were in Zimbabwe, and committed to maintaining and sustaining the work.

Engineers Without Borders harnesses the skills of engineers to tackle the challenges that keep the world’s poorest people from living healthy, productive lives. Professional engineers volunteer their time to address technical problems around the world. Engineering students from university chapters work on both local and international technical projects.

The students are also volunteers, and although they do not receive academic credit for their work, they gain valuable experience. The students must follow the “engineering process” as specified by the national organization, and for international projects, they must have cultural and technical mentors, Harvey said.

Carnegie Mellon students, including project leaders Fang and Christina Ou, team members Ashley Burbano and Melina Driscoll, and mentor Don Ziegler, recently visited Nyadire to check on the operation and ensure that proper maintenance is being completed and the system is sustainable.

Burbano and Driscoll said that as they researched prior to their visit, they tried to imagine the situation and the community. Seeing the campus in person gave them a fuller, clearer picture of the impact on Nyadire, so that when they returned to the U.S., they were better prepared to make revisions.

“The solar lights brought so much joy to the (teachers’) college,” said third-year student Talent Nyemba, 26. Before the lights were installed, she said, “moving at night was so scary (because of) the distance between the dining hall and the hostels.”

The lighting was a welcome addition, she said, especially for female students who sometimes catch a 5 a.m. bus from campus to Harare.

“The lights brought much-needed illumination and reduced the risk of theft and loitering of students in dark corners,” noted the Rev. Lancelot Mukundu, Nyadire Station chair. “It also gave freedom of movement to the local people.”

He said the station has established a fund to save $100 per month for the next seven years, which is when the life span of the batteries will expire and they will need to be replaced.

“This is a beautiful extension of ministry, really beautiful,” said Zimbabwe Episcopal Area Bishop Eben K. Nhiwatiwa. “We know of Doctors Without Borders. Now we have the Engineer Without Borders at Nyadire. In the spirit of chabadza (working together), we say ‘Hallelujah! Praise the Lord!’”

Kumuterera is a communicator for the Zimbabwe West Conference.

United Methodists launched the Twins Association of Zimbabwe in 2016 to assist mothers of multiples, support children through school and empower them economically through various projects.
Theology and Education