A star-studded array of officials from the last presidency turned out Nov. 16 to break ground for the George W. Bush Presidential Center at United Methodist-related Southern Methodist University.

Former Vice President Dick Cheney and former Secretary of State Condoleeza Rice were among more than 3,000 friends, supporters and former administration officials filling a massive white tent on the eastern edge of the SMU campus.

The former first couple, both United Methodists, also were joined by their pastor, the Rev. Mark Craig of Highland Park United Methodist Church, in lifting shovels full of dirt symbolizing the start of work on the 225,000-square-foot brick and limestone presidential library center scheduled to be completed in February 2013.

"The Bush Institute will stand with all who work for human freedom," declared Laura Bush, speaking at her alma mater.

Outside the ceremony, however, about 100 protesters were joined by a handful of counter-protesters, The Associated Press reported. The protest included hundreds of white crosses staked into the ground to represent troops killed in Afghanistan and Iraq. Among the protesters was Cindy Sheehan, who became a war critic after her 21-year-old son Casey was killed in Iraq in 2004.

The center will house a library, a museum and a think-tank-type policy institute. The National Archives will operate the library and museum. The Bush Foundation will run the institute. Its policy institute is already working and will focus on education reform, global health, human freedom and economic growth.

Much of the remaining 23-acre site will be landscaped to evoke north Texas ecosystems, including native plants and winding paths. 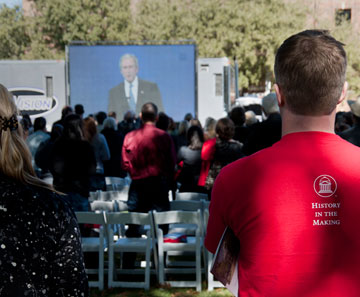 Southern Methodist University campaigned for more than eight years for the center. The university and the church's South Central Jurisdictional Conference, which owns the school and elects its trustees, contended the presidential library is an honor that will serve as a resource for historical research, dialogue and public programs.

But United Methodist critics opposed to many policies of the Bush administration, including the war in Iraq, argued placing the institute on SMU property would be inconsistent with church teaching. An online petition drive against locating the presidential library at SMU garnered several thousand signatures from church members, including some bishops.

The Rev. Jeannie Trevino-Teddlie, director of the Mexican-American program at SMU's Perkins School of Theology, made a request for a legal decision, contending the lease would subsidize "a specific political and ideological point of view." The Judicial Council, the denomination's top court, ruled last year that the agreement did not violate church law.

Speakers at the Nov. 16 ceremony said the center will serve the public good.

"Today's groundbreaking marks the beginning of a journey," George W. Bush said. "We take the first step toward the construction of the presidential center, which will be a dynamic hub of ideas and actions, based upon timeless principles."

Cheney, thinner after a long hospital stay, praised Bush for his response to the Sept. 11 terror attacks.

"America went from being on the defense against terrorists to going on the offense against them," Cheney said. "Because you were determined to throw back the enemy, we did not suffer another 9/11 or something worse."

That evening, after Bush Center friends, protesters and traffic had cleared from the site less than a mile away, 20 men gathered at Highland Park UMC for their weekly "Tuesday Knights" study session. Asked about their perspectives regarding the Bush Center, most responded positively.

Greg Larrick said, "Bush Center will be good for this area, SMU and our church. It will be accessible to many people, and add a global influence with positive suggestions. A real vindication of Bush's views."

*Lovelace is a freelance writer based in Dallas.

United Methodist Board of Higher Education and Ministry