The shadow of the deadliest Ebola outbreak in history lingers over United Methodist and government hospitals, where staff even now prepare for another outbreak.

Months after the end of Ebola, United Methodists, the Sierra Leone government and other health partners are focused on strengthening healthcare, especially infection prevention.

Before Ebola, people didn’t understand a disease could be contracted solely through touch, said Dr. Omar Lamin, the medical officer in charge at United Methodist Kissy Hospital in Freetown. 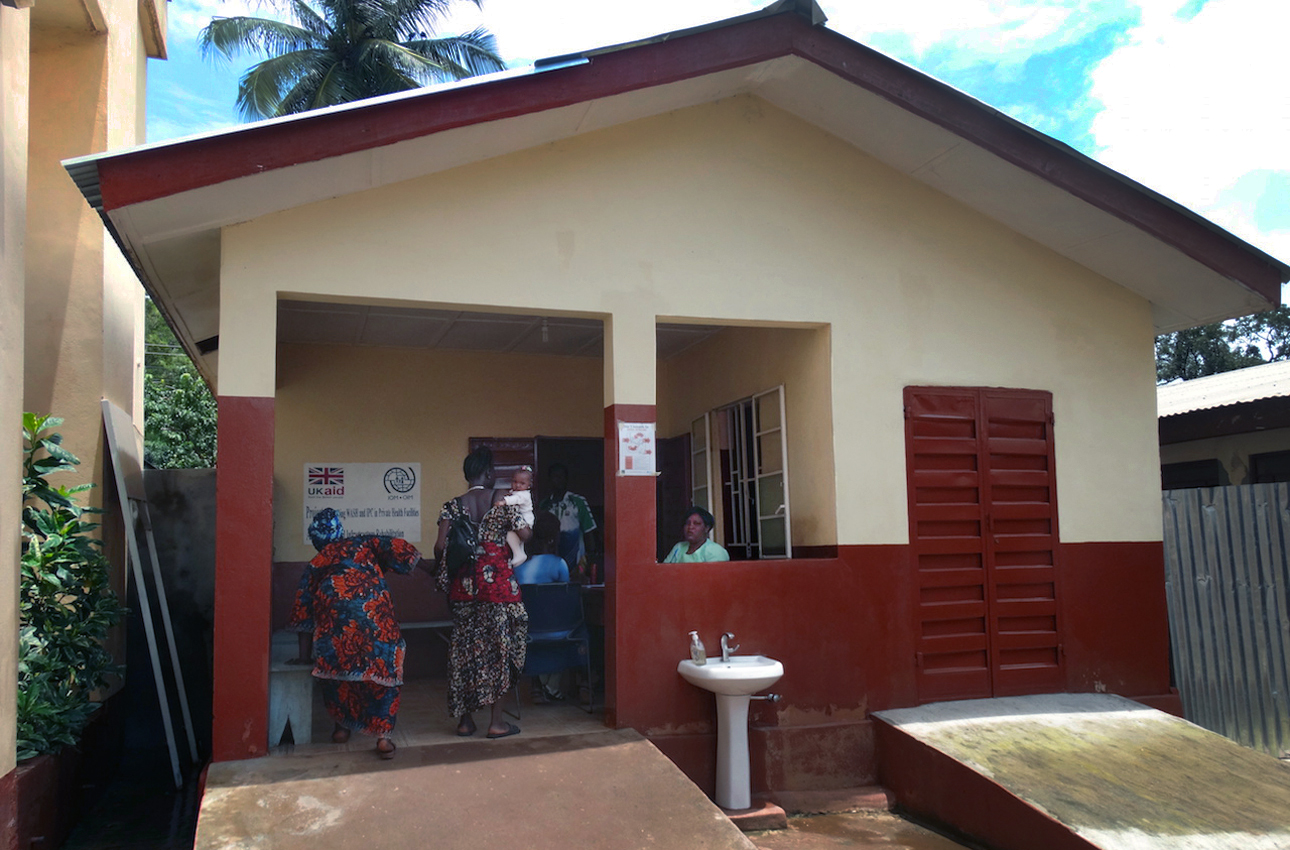 One of two triage structures at the southern entrance of United Methodist Kissy Hospital in eastern Freetown, Sierra Leone. Facilities like Kissy are building and improving Infection Prevention and Control units and other infrastructures to be better prepared in the event of future Ebola outbreak. Photo by Phileas Jusu, UMNS.

“With the unfortunate experiences we had during Ebola, there is an awakening to infection prevention and control,” Lamin said.

Lamin said Kissy Hospital is far more prepared than before the outbreak. Before Ebola, there was no requirement that patients and visitors wash their hands before entering the hospital.

Now, United Methodist Kissy Hospital has several-hand washing stations at the entrance of all units.

Lamin said the government has worked to put in place a system to treat infectious patients. “What we have done in the hospitals is to prepare a place to isolate and care for patients suspected of having Ebola until they are taken to the treatment centers government has prepared,” he said.

He believes any future outbreak would be less severe because of these improvements. There was lack of cooperation from health workers and communities when the outbreak began in 2014, Lamin said.

“We now have enough ambulances and enough personal protective equipment,” he said.

This is the first story in a series about the aftermath of Ebola in Sierra Leone and Liberia. Additional stories later this month will examine the lives of Ebola survivors and United Methodist healthcare in Liberia.

United Methodist Kissy Hospital closed briefly after Dr. Martin Salia, chief medical officer and surgeon, tested positive for Ebola. The hospital now has two triage structures, one at each entrance, as well as a full unit on infection prevention control with trained personnel who ensure compliance in the hospital.

Salia, who died of Ebola in November 2014, was one of 11 doctors in Sierra Leone who died during the outbreak.

Lamin says Ebola is on his mind everyday even though the outbreak is over now.

“Every morning after prayers, staff are reminded to observe safety precautions throughout the day even before they take up their respective duties,” he said. He said staff are cautioned daily not to touch patients without protection, because that accounted for many health care workers contracting Ebola.

The hospital is re-organizing the community health department to resume community outreach, which was halted during the 2014-2015 Ebola outbreak.

A new concrete building just inside the entrance of the Bo Government Hospital will replace the temporary triage that was used during Ebola.

All patients are screened at the triage before getting any other treatment and there is an isolation room for patients whose body temperature and other symptoms indicate they could have an infectious disease.

Dr. Gerald Young, medical superintendent, said there is ongoing training of personnel on infection prevention and control, as well as a regular supply of preventive supplies such as gloves and other protective equipment.

Since June 2014, The United Methodist Church has been responding to the Ebola epidemic in West Africa and developing long-term support to health boards in Sierra Leone, Liberia and Cote d’Ivoire and other partners.

If you would like to give financially to support the goals of this long-term approach, please give to UMCOR Global Health, Advance #3021770. One hundred percent of your donation will help Global Ministries to work with local partners to strengthen healthcare capacities to confront this and other health challenges.

Young says the post-Ebola emphasis on infection and prevention is completely different. Monitoring of compliance was not intensive, and the entire staff was not trained in infection prevention and control.

“We know that Ebola exposed the inadequacies of the health system. So now we are filling in the gaps that existed before Ebola,” said Young, who adds that he has seen real improvement in precautionary measures.

“The outbreak of Ebola has taught us a lot of lessons. It happened when nobody was prepared for it. Even our nurses were not fully prepared to handle an outbreak. Hence lots of our health personnel got infected and died,” Turay said. “The structures were not in place: the supplies, the logistics, the ambulances, etc. After the outbreak, the ministry of Health and Sanitation is addressing all these lapses.”

“During Ebola, the Emergency Operations Center had a psycho-social support unit, which was one of the many structures set up to address issues of trauma and stress. Within the hospital, we also have a mental department and the infection and prevention control unit. Jointly, they are all helping with trauma healing during trainings.  People are trying to cope,” Young said.

During the outbreak, people were afraid to go to health facilities for fear of getting Ebola, so government in the first nine months after the outbreak ended focused on restoring the essential healthcare delivery services, Turay said.

“After Ebola, we had to encourage them to come back. We have achieved that within the first nine months after the outbreak. Now, the clinic attendance in the health facilities is just like the period before Ebola,” Turay said. He added that services such as the immunization program and the malaria program — shut down during Ebola — are back in operation.

“The routine vaccinations to the children have all picked up again,” Turay said.

Health centers in remote, rural communities are not as well-equipped.

A solar-powered booster pump that should send water from the well to the 1,000-liter overhead water tank at Taiama United Methodist Health Center was badly installed and remains dysfunctional.

Government Peripheral Health Units do have some water, but not the 24-hour running tap that exists at United Methodist Mercy Hospital and the Bo Government Hospital, Turay said.

Treatment centers and laboratories have been built in all four regions of the country, Turay said.

“So, should there be an Ebola outbreak soon, we would not have to take specimens from here to elsewhere in the country as was the case when Ebola first broke out,” Turay said.

"We are using these protective measures not only to safeguard ourselves but the environment as well,” Dr. Bockarie Kanneh said. “For instance, if I want to see a patient and for a moment forget to wear gloves, a nurse will suddenly show up with a pair of hand gloves. That is the level of consciousness that Ebola left on us.”

Waste materials are disposed of in specific pits dug on the outskirts of the hospital. Syringes and similar items are put in special non-perforated packs and incinerated.

Biological wastes are deposited in the pits, which Kanneh said were non-existent before Ebola.

“We did not have the triage to do that in-depth level of screening for Ebola before patients were let into our facilities. Now, if any patient is suspected of Ebola, he or she is given a special place to stay until they are taken elsewhere for treatment.”

Jusu is communicator for The United Methodist Church in Sierra Leone.

The late Sierra Leone bishop was honored by the World Methodist Council for his work as a bridge builder at home and across the United Methodist connection.
Theology and Education

Speakers at the ceremony recalled the late Bishop John K. Yambasu’s zest and passion as he worked around the clock to actualize his United Methodist university dream for Sierra Leone.
Mission and Ministry