The suit was brought by the Rev. Cameron Jerrod Greer, 26, now serving as local pastor at Cockrell Hill United Methodist Church in Dallas. It says Gordon first made sexual advances on him in May 2003, when Greer was an 18-year-old audiovisual technician at St. Luke.

Greer's suit, which alleges other incidents, says Gordon used his position to coerce Greer and other young men at the church into unwanted sexual encounters.

The suit names St. Luke and the North Texas Conference as defendants, as well as Gordon. It says the church and the conference failed in their fiduciary and supervisory duties by failing to protect Greer from Gordon.

Allegations of reports in 2006

The suit, filed in the 101st District Court in Dallas, alleges that St. Luke leaders had sexual-harassment reports about Gordon as early as 2006.

"Folks had knowledge," said Marilynn Mayse, Greer's attorney and a longtime St. Luke member, in an interview. "I just don't know why he was never put on administrative leave, why he was allowed to continue." 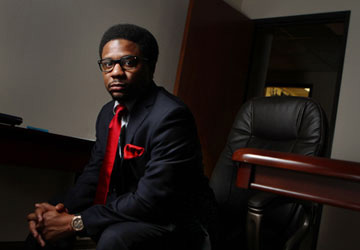 Though Greer is the only plaintiff, Mayse said she is in touch with two other young men from St. Luke who have similar complaints about Gordon. She said she has talked as well to alleged victims in Wichita, Kan., where Gordon was a pastor before going to St. Luke in 2002.

"This is a terrible thing I've had to do," she said of the suit, "but he's a predator. I believe these guys who've talked to me."

Bledsoe announced in a Jan. 20 statement that Gordon had resigned from St. Luke and surrendered his United Methodist Church credentials, effective Feb. 15.

Gordon had been under investigation by the denomination for allegations received from people in and outside of St. Luke, Bledsoe said then, though he did not offer specifics.

St. Luke is one of the largest predominantly African-American churches in The United Methodist Church, with about 5,000 members. Gordon succeeded the Rev. Zan Holmes, now pastor emeritus at St. Luke and well known across the denomination for his preaching and civil rights work.

Holmes is to be interim pastor at St. Luke until an appointment can be made this summer, Bledsoe said in the earlier statement.

Gordon went to St. Luke from Saint Mark United Methodist Church in Wichita, which grew rapidly in his 14 years there. He has been board secretary of Black Methodists for Church Renewal, and Abingdon Press lists him as the author of its "African-American History Month Daily Devotions 2012."

His Abingdon profile notes that he and his wife have two daughters.

The suit mentions four incidents against Greer, the last in January 2010.

Greer complained to a North Texas Conference official in November 2010, and on Sept. 12, 2011, made a formal written complaint against Gordon, according to the suit.

The United Methodist Church has no central repository for reporting or tracking complaints of clergy sexual misconduct.

The Book of Discipline, the denomination's law book, lists sexual misconduct as a chargeable offense and outlines a church complaint process.

Under the denomination's definition, sexual misconduct can include "child abuse, adult sexual abuse, harassment, rape or sexual assault, sexualized verbal comments or visuals, unwelcome touching and advances, use of sexualized materials including pornography, stalking, sexual abuse of youth or those without capacity to consent, or misuse of the pastoral or ministerial position using sexualized conduct to take advantage of the vulnerability of another."

Mayse said Greer decided to file suit after sheets of paper defaming him were placed on cars at Cockrell Hill United Methodist Church.

The suit asks for unspecified damages and says Greer has suffered "mental pain and suffering and adverse physical consequences."

Greer is studying for a master of divinity degree at Perkins School of Theology, at Southern Methodist University, and currently is part of Perkins' intern program, a school official confirmed.

*Hodges is the managing editor of The United Methodist Reporter.