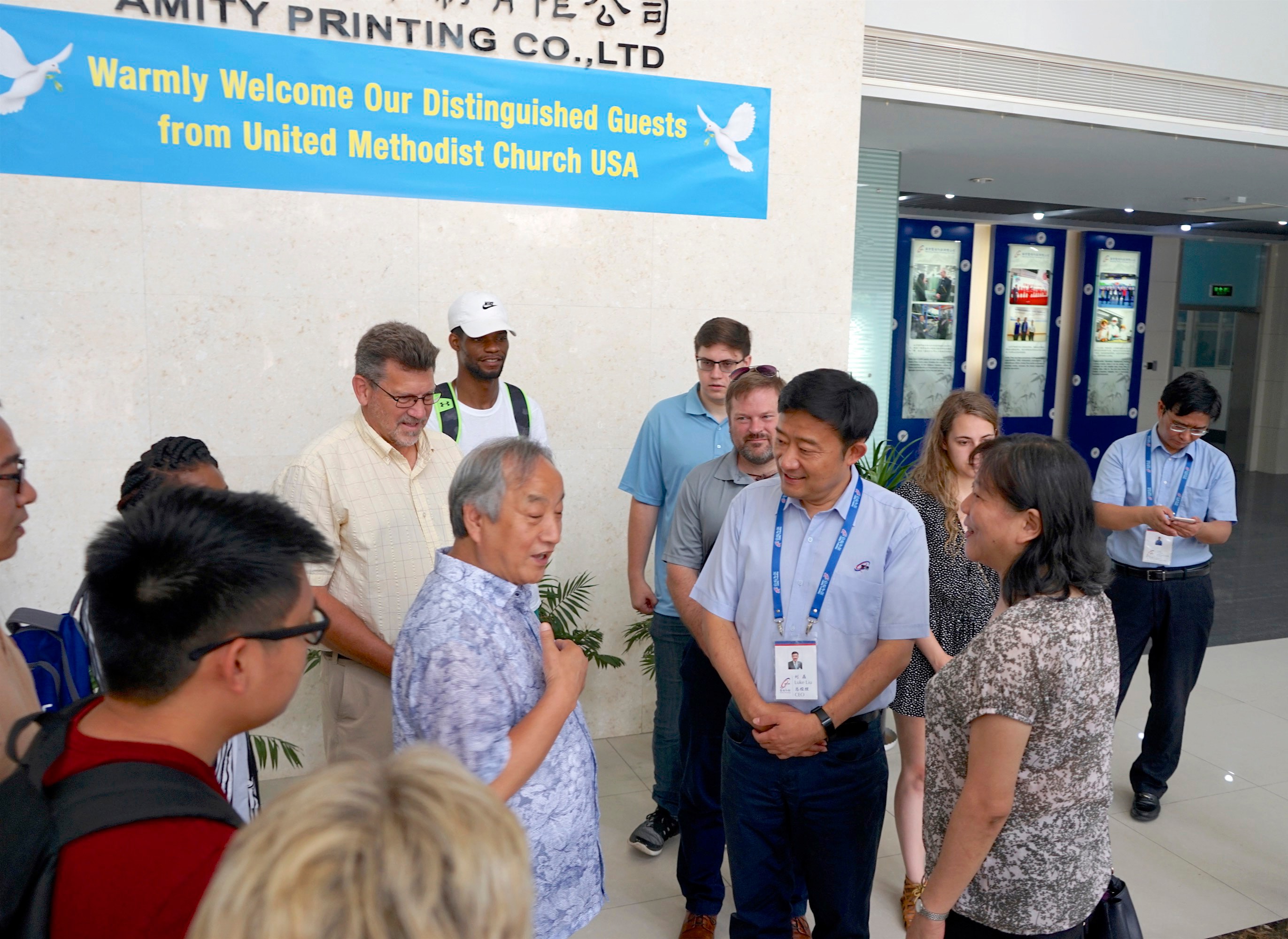 Wisconsin Area Bishop Hee-Soo Jung, center left, talks with officials from the Amity Printing Press in Nanjing, China, during a visit by a joint United Methodist Volunteers in Mission team from the denomination’s North Central and Northeastern Jurisdictions. In November, Amity will print its 200 millionth Bible and Jung is among the Christian leaders invited to come and mark the occasion. Photo courtesy of the Rev. David Newhouse. 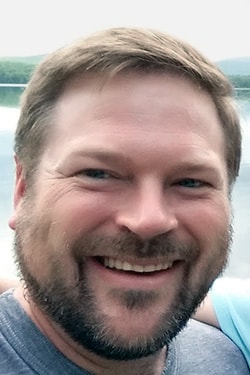 The Rev. Thomas Lank
“Do not be ashamed of the gospel,” Pastor Rachel preaches to hundreds of worshippers. “Be bold in proclaiming your faith. Always be prepared to give an account of the hope that is within you.” The congregation rises to sing along with the praise band. “Spirit lead me where my trust is without borders… .”

The scene unfolds in a place you might not expect: Beijing, China. We are at Haidian Christian Church, which the senior pastor claims is still struggling to grow. They have seven worship services each weekend (including one conducted in English), thousands in attendance, 10 satellite campuses and 12 choirs.

From July 17-30, a joint United Methodist Volunteers in Mission team from the North Central Jurisdiction and Northeastern Jurisdiction has been on a journey of peace and goodwill visiting the churches and parachurch organizations in three Chinese cities — Shanghai, Nanjing and Beijing. In addition to building the relationship between United Methodists and Chinese Christians, the journey is intended to develop young United Methodist leaders aged 18-35. They are engaging in hands-on training and daily reflection as team leaders so that they can lead teams of their own once they return.

The Volunteers in Mission journey, known as Discover… Mission China, is led and organized by the Rev. David and Christy Newhouse of the Michigan Conference. Bishop Hee-Soo Jung is accompanying the group, providing spiritual leadership and cementing the institutional relationships between the denomination and its Chinese partners. Jung oversees the Wisconsin Conference and serves as president of the United Methodist Board of Global Ministries. This is his 12th trip to China.

Mitchell is the youngest member of the team at age 19 and speaks excellent Mandarin. She is often called upon to introduce the group when it meets with Chinese hosts and dignitaries. The team appreciated the support of Global Ministries while traveling China as well as assistance from the China Christian Council and Three-Self Patriotic Movement through Robin Luo, a professor of systematic theology from Beijing, who accompanied the team throughout its journey.

The group has been invited to China under the auspices of the China Christian Council and Three-Self Patriotic Movement. These are the official expressions of the Christian Church in the People’s Republic of China and operate with its blessing. 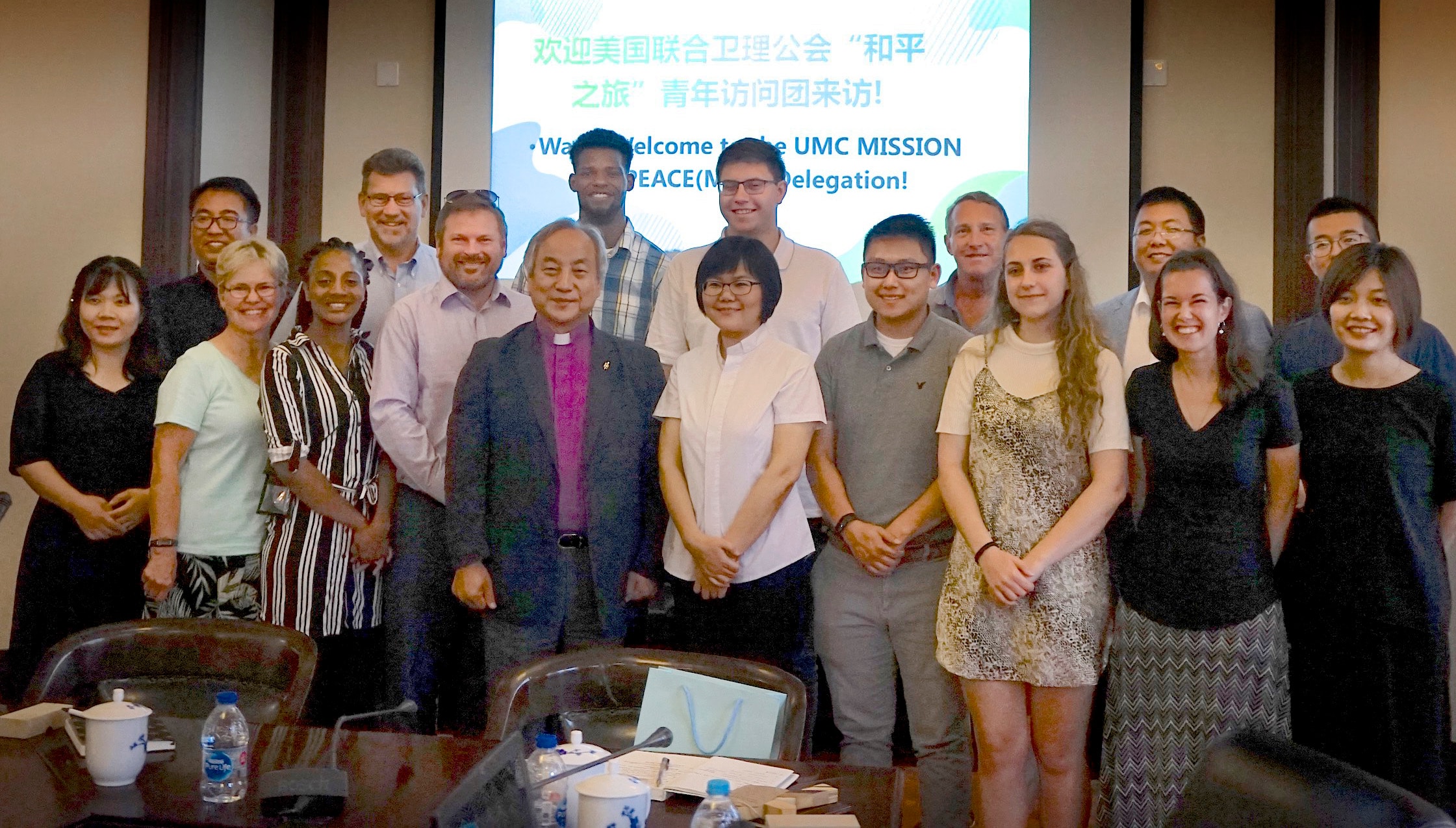 The United Methodist Volunteers in Mission team, with their hosts at the China Christian Council in Shanghai. Their journey, known as “Discover… Mission China,” was led and organized by the Rev. David and Christy Newhouse of the Michigan Conference. Photo courtesy of the Rev. David Newhouse.
Following the Cultural Revolution (1966-1979), when churches were disbanded or forced underground, it was those two organizations that were granted ownership of the church buildings that survived. As trust was built between the church and the CCC/TSPM, these churches were granted more land and allowed to expand. Other “house churches,” or underground churches, continue to operate without formal recognition from the state. But faith is becoming more and more a part of public life in China. Formal evangelism is still not allowed in public places, but people are flocking to the churches nonetheless and it is exciting to see.

In addition to visiting representatives of the CCC/TSPM in each city, the Volunteers in Mission team is also visiting the YMCA/YWCA and Amity Foundation. Though formally they are separate nonprofit organizations, both maintain strong links to the Christian church and many of their leaders have graduated from the Nanjing Union Theological Seminary.

Like its counterparts in the United States, the YMCA/YWCA offers cultural and recreational activities, but in China there is also a strong focus on social programming. The YMCA/YWCA often operates social programs piloted and funded by the government, such as autism services and programs for persons with developmental disabilities. They sponsor programs to maintain traditional Chinese culture, such as Peking Opera and minority cultural celebrations.

Founded in 1985, the Amity Foundation and Amity Printing Press have also sprung up to meet the needs of the church and the society in the era since the Cultural Revolution. Amity Printing Press has a contract with the United Bible Society to print Bibles and reference materials in dozens of languages; they opened a brand new facility in 2008. This November, Amity will print its 200 millionth Bible and Christian leaders from all over the world, including Jung, have been invited to attend. As part of the One Belt, One World Initiative that has seen the expansion of Chinese infrastructure investment in Africa, Amity has also opened offices in Addis Ababa to help African Christians produce Bibles in African languages, using African labor.

The Amity Foundation is a longtime partner of Global Ministries and the United Methodist Committee on Relief. It has gone through several phases in its short 35-year history. Its first decade was people-oriented through direct-service programming. The second decade was development-oriented and focused on capacity building and more participatory methodologies. Decade three was focused on social innovation and achieving balance in the organization’s programs between rural/urban ministries, domestic/international activities and community development/direct-service activities. Now in its fourth decade, the focus has expanded to encompass international aid and development. They, too, are expanding into Africa with offices in Addis Ababa and Kenya.

Amity occupies what it calls a “Special Philanthropy Zone” at the nexus of the government, private sector and nonprofit sector. According to Amity’s associate general secretary for Diakonia, the government began to encourage religious groups to engage in charitable activities in 2012, and Amity has been at the forefront as an incubator of new ideas and programming in social services.

Once Amity proves a program is viable, the government often will adopt it as a national initiative. While in China, the Volunteers in Mission delegation visited an elderly care facility — a service increasingly demanded by the rapidly urbanizing and industrializing population — as well as a bakery that trains and employs persons with Down Syndrome. But Amity’s vision also goes into ecological protection efforts, anti-poverty programs, interfaith dialogue and disaster response. Amity-trained volunteers have served communities affected by earthquakes, mudslides and other natural disasters — both within China and in the Philippines, Madagascar, Nepal, Sri Lanka, Ethiopia and Ecuador.

Between its visits with churches, leaders and programs, the UMVIM team has found time to appreciate Chinese culture. They have visited traditional Chinese gardens, the Nanjing Massacre Memorial Hall (chronicling the massacre of as many as 3 million residents of Nanjing by the Japanese during World War II), a historical temple dedicated to Confucius, the Forbidden City, Tiananmen Square, the National Museum of China, the Great Wall and the Summer Palace of the Emperors.

On July 26, the group participated in a first-of-its-kind choral cultural exchange between the China Christian Council and The United Methodist Church. Large professional choirs from the Beijing Christian Council, the Beijing YMCA/YWCA, and the Haidian Church all performed musical selections and invited the U.S. delegation to offer songs of its own. This was a significant gesture of goodwill and cooperation.

Jung and the leaders of the Chinese Christian Council look forward to continuing the exchange of groups and mutual learning in the future. There are already plans in the works for more delegations to visit in both directions, perhaps even bringing one of the Beijing choirs to sing at General Conference 2020.

Lank, a deacon in the Greater New Jersey Annual Conference, trained leaders for the China trip. He has served as the Northeastern Jurisdiction’s United Methodist Volunteers in Mission coordinator since 2016.