Adalberto United Methodist Church in Chicago has opened its doors once again to a woman seeking protection from deportation to Mexico.

Flor Crisóstomo, 28, says she is "picking up the torch" from Elvira Arelleno, another congregation member who lived in the church for a year before leaving last August. Arelleno was arrested and deported within days of leaving Chicago and arriving in Los Angeles, where she had planned to speak out for compassionate immigration reform.

"Today we respond as a church to another request for sanctuary from one of our members," said a statement released Jan. 28 by the church. "We respond by standing together with her as Jesus calls us to do."

Crisóstomo has three children, ages 9 to 14, and an elderly mother she supports in Mexico with wages she earns in the United States. She came to the United States illegally in 2000. She said she was following her two brothers to the United States because the North American Free Trade Act (NAFTA) had put many farmers out of work in Mexico and she could not feed her children in her hometown of Guerrero. 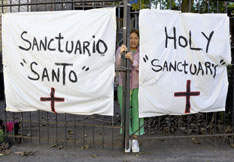 Elvira Arellano received sanctuary at thechurch for a year before being deported. A UMNS file photo by Paul Jeffrey.

Crisóstomo took refuge in the Chicago church on Jan. 28, her last day for leaving the United States voluntarily under an order by the U.S. Board of Immigration Appeals. She had been arrested by immigration authorities in April 2006 in a workplace raid at IFCO Systems, a manufacturer of crates and pallets in Chicago. She was released pending her immigration hearing and subsequent appeal, which was denied last November.

"I hate the system of undocumented labor," she said in a Jan. 28 statement. "It has separated me from my children for seven years. I believe with all my heart that Mexico and the United States together must end this system."

A statement issued by the Chicago office of the U.S. Immigration and Customs Enforcement said the judicial process had given Crisóstomo more than enough time to comply with the law and that Crisóstomo is now considered an immigration fugitive.

The congregation of Adalberto United Methodist Church, which is in a predominantly Hispanic neighborhood, is "100 percent behind Flor," said the Rev. Walter Coleman, pastor of church.

Coleman said Crisóstomo knows her stand puts her at risk of going to prison, but she wants "to make America see" what is happening to millions of undocumented immigrants.

"I believe with all my heart that Mexico and the United States together must end this system." — Flor Crisóstomo

"We are inspired by her," he said.

Coleman said Arellano, who lived in the church with her son, Saul, is doing well back in Mexico and is still campaigning for immigration reform. Saul, who was born in the United States and was 8 when his mother was deported, initially lived with the Colemans in Chicago but has since been reunited with Arellano.

"It was a long spiritual journey but she is well," Coleman said. "Saul told me 'Pastor, I am adjusting.'"

Meanwhile, Arellano told The Associated Press she hopes the immigrant community in the United States will rally around Crisóstomo the way they did her.

"Undocumented immigrants are living there in the darkness, fearing deportation and being separated from their families," she told The AP on Jan. 29, the day after Crisóstomo sought sanctuary.

Crisóstomo said the current policy of raids and deportations make people live in fear but will not end the system of undocumented labor.

"We cannot go home to hungry eyes and we cannot leave our families here," she said.

Maria Chavalan Sut, who lived in sanctuary at Wesley Memorial United Methodist Church in Charlottesville, Virginia, has been granted a Stay of Removal for one year.
Local Church

Kingwood United Methodist of Houston provides space, volunteers for push to help Mexican citizens in the U.S. get Mexican passports and other documents.