Prodded by a Jewish colleague, the United Methodist scholar the Rev. Thomas C. Oden made a turn in midlife, changing his focus from modern theology to the ancient Christian writings.

Oden, who died Dec. 8, once described the experience as “like coming home.”

From then on, he would use his influence, as writer, editor and longtime professor at United Methodist-related Drew University, to get Christians to look way back.

“He has helped the church to recover the treasures and riches of the ancient Christian tradition,” said the Rev. Stephen Seamands, professor of Christian doctrine at Asbury Theological Seminary.

Oden, 85, died at his home in Oklahoma City.

His output as a scholar, before and after his shift, was prodigious, and touched on a wide range of subjects, including Methodism founder John Wesley. 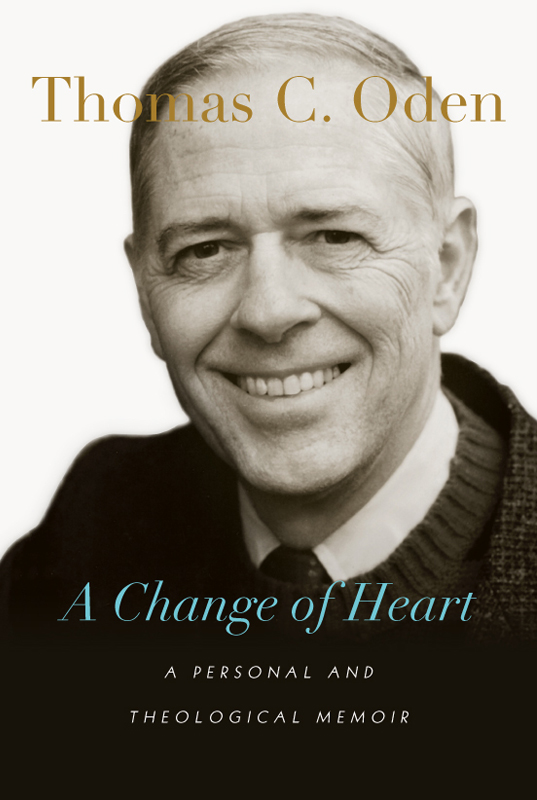 The Rev. Thomas C. Oden’s “A Change of Heart” tells his life story, including his shift from focusing on modern theology to the early Christian fathers and their teachings. Oden, a professor and United Methodist elder, died Dec. 8. ​Image courtesy of InterVarsity Press.

Oden’s passing brought tributes from evangelical Christian leaders who admired his willingness to change course, as well as his subsequent conservative political positions and blunt critique of mainline denominations.

“As an Oden family member, he liked to have fun and play games,” she said. “We often played duets on the piano.”

She shared an obituary prepared by the family that spoke of his "tender, caring influence" on generations of family members and friends.

A turn from the new

Oden was born in 1931, in Altus, Oklahoma, and grew up during the Depression and World War II. His father practiced law, and his mother taught music. (Retired United Methodist Bishop William Oden is his cousin.)

The future theologian would earn degrees from the University of Oklahoma, Southern Methodist University’s Perkins School of Theology and Yale University, where he got his Ph.D. in 1960.

He was an ordained elder in the Oklahoma Conference, but his career was in academia. He taught at several schools, and was Henry Anson Buttz Professor of Theology and Ethics in the Theology School at Drew from 1980 until retiring in 2004.

Oden had been an ardent liberal both theologically and politically when a Jewish colleague at Drew, Will Herberg, challenged him to look back to the ancient Christian writers.

Reading them caused a new commitment by Oden to Jesus’ divinity and resurrection, and to the wisdom found in the early church. He underwent both scholarly and personal transformation.

“Funny I was put on the path to a genuine Christian new birth by a Jew,” Oden wrote in his memoir “A Change of Heart.” “I who had once been a social radical became a ‘mere Christian’ and finally became a theologian after having only pretended to be one.”

Oden became so committed to the early Christian teachings that he was happy to have dreamed once that his epitaph would be: “He made no new contribution to theology.”

Seamands, who studied under Oden at Drew, has long assigned Oden’s major theological work in classes at Asbury.

“I say to students, ‘The best thing I can do for you this semester is to get you to read this,’” Seamands said.

Oden also took the lead in editing the 29-volume “Ancient Christian Commentary on Scripture,” published by InterVarsity Press. He wrote a four-volume guide to John Wesley’s texts, and saw Wesley as deeply connected to the early church fathers.

“Wesley could easily read Clement of Alexandria in Greek, or Cyprian or Augustine in Latin,” Oden said in a 2011 interview with Acton Institute. “He brought all this wisdom with him to the evangelical revival of the 18th-century.”

The Rev. Ted Campbell, a professor at United Methodist Perkins School of Theology, said Oden pushed for a single-minded focus on Wesley’s texts.

“The point was, Wesley was orthodoxy, therefore we should study what Wesley said and not be particularly troubled by modern theological issues,” Campbell said.

Later in life, Oden would write on the early church in Africa, including such books “How Africa Shaped the Christian Mind” and “The African Memory of Mark.”

“He’s trying to say to the African church, ‘You’ve got a theological heritage to recover,’” Seamands said.

After his turn to the study of the early Christian writers, Oden became outspokenly opposed to abortion and took other conservative social positions. He affiliated with the Confessing Movement and the Institute on Religious and Democracy.

“He was a one of a kind theological mind,” said Steve Beard, the magazine’s editor in chief.

As for his quarrel with the direction of mainline denominations, Oden did not understate.

“They are by now more sideline than mainline,” he said in the Acton Institute interview.

“I had the sense that he really felt alienated within our church and yet, unlike some other theologians, he never moved,” Campbell said.

Seamands recalled Oden as one who, while strong in opinions, had humility and a sense of humor — particularly about trying to figure out God through theology.

For Seamands, Oden set a standard.

“What he modeled for me was what a true Christian scholar looks like, just in terms of his love of being a scholar and the work of scholarship, and the study and integrity in which he approached that task,” Seamands said.

His funeral will be Dec. 17, at 2 p.m., at United Methodist Church of the Servant in Oklahoma City.