Next to the graveyard where John Redmer stands are two roads.

The first, a winding road that used to be the main throughway into Bowbells, is where he remembers coming into a town in a buggy with his grandmother, who would complain about the horseless vehicles causing a commotion in the road.

The second road, a little farther out, is the highway that can take residents quickly into the city of Minot some 65 miles away, and the Targets and Wal-Marts that spelled the end of downtowns in places like Bowbells. These communities fear they will become little more than speed traps along US-52, where lower speed limits posted for a mile or two will be the most visible reminders of once-thriving towns.

The people in the United Methodist churches in Bowbells, Kenmare and Donnybrook and in many other rural congregations across the nation also know they are at a crossroads.

They are not looking to recreate what sociologist Mary Jo Neitz of the University of Missouri refers to as the image of the rural church in most people’s minds, that “of the simple white building with a steeple, the heart of the community, the heart of a vanishing America of two-parent families and family farms.” The irony of holding on to that mythic image of the rural country church, Neitz says, is that it “prevents us from seeing what are really there — both the challenges and possibilities.” 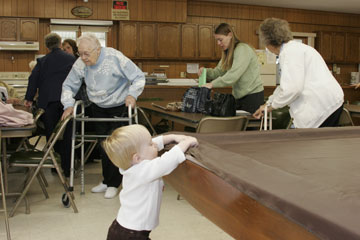 The Kenmare congregation has increased attendance since moving down the street to the more accessible Senior Center. A UMNS photo by Jan Snider.

The folks at Kenmare United Methodist Church closed their simple white building with a steeple two years ago. The foundation was crumbling, the furnace was shot, and the 10 members left could not afford the $5,000 a year to minimally heat the building. They now meet at the Kenmare senior center.

"Congregations may be opening new doors in America's suburbs, but doors are closing in rural communities. There is good reason for worry about the plight of the rural church in America," the study reported.

But no one is giving up.

"If we intend to abandon the rural neighborhoods, then we need to quit kidding ourselves about promoting scriptural holiness throughout the land," one church leader wrote in the rural fellowship survey. 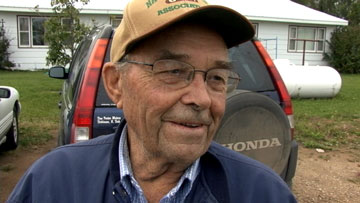 John Redmer, 90, says of the possibility the Bowbells church might close, "Oh, gee whiz, I don't even want to think about it. But I'm afraid it's going to happen." A UMNS photo by Carey Moots.

At 90, Redmer knows the resurrection awaits. "I've always been a Christian and I've always followed the Bible," he says. "I believe what the Bible says: A day with the Lord is like a thousand years."

He is at peace standing in the graveyard where his ancestors are buried. A smile crosses his face as he looks at the spot reserved for him next to his wife.

It is his hope that on the day of his funeral he will begin his final journey in the church that nurtured him.

But no one can make any promises.