Saint Paul School of Theology has gone from "landowner to sign owner" with the start of the fall 2013 semester, moving to the campus of the United Methodist Church of the Resurrection.

Dropping enrollment and financial problems forced Saint Paul to relocate from its large, rambling campus in the Kansas City. Mo. area to one of the largest United Methodist churches in the United States, located in Leawood, Kan.

Saint Paul, which also has a campus in Oklahoma City, has a current enrollment of 169 students on both campuses with 33 new students starting at the Kansas location this fall.

From the beginning, it was all about location.

Established as a Deaconess Training School in the early 1900s, the Truman Road location was chosen so deaconesses could learn about bringing social services and early childhood education to immigrant and poor urban populations.

Today, the 217,000-square-foot site costs more than $1 million a year to maintain and it is increasingly difficult to keep up with technology, said the Rev. Myron McCoy, president of Saint Paul since 2003.

"Since the economic crisis of 2008-09, we have been discussing many possible paths forward. During this time, our endowment was reduced, donor and denominational support decreased, and current and prospective students struggled financially, which negatively impacted enrollment," McCoy said.

Significant staff reductions occurred in 2009, and one of the buildings, Ada Mead Hall, closed in 2011.

In a press release from the seminary in February, the move was described as "an educational collaboration with the United Methodist Church of the Resurrection. The goal of the venture is to intentionally model a theological education experience that combines classroom instruction of the highest caliber with the practical wisdom of vibrant church ministry."

The Rev. Adam Hamilton points out the Church of the Resurrection has lots to offer a seminary student: a church with a weekly attendance of more than 6,000, a pastoral staff of 13, multiple worship services throughout the week, four physical locations, online services and national and international mission projects. Students will observe funerals, weddings, administrative tasks such as budgeting, and ministries with children, youth, special needs, young adult and senior adults. 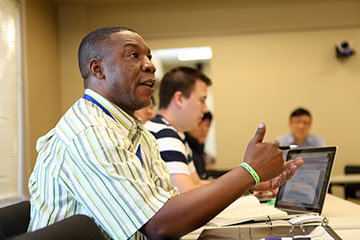 Frido Kinkolenge, a master of divinity student, participates in his seminary class in the East Building of Church of the Resurrection. A UMNS photo by Francisco Litardo.

Speaking about the move, Hamilton said the seminary was "losing money at an unsustainable rate" and that led the board of trustees to ask "tough questions."

"We began talking about what we might do to educate the best prepared leaders for local churches. This conversation led us to talk about how medical schools prepare doctors. Most of the best medical schools are located adjacent to teaching hospitals. Students have excellent faculty teaching in the classroom, then observe excellent physicians caring for real patients.

"The number one criticism of local churches when they receive new seminary grads, and a frequent response of new seminary grads to their first appointment is that seminary didn't provide them with the practical ministry skills needed for the job," Hamilton said.

Even with the benefits the Church of the Resurrection will offer, many alumni and supporters are not sure they make up for the loss of the historic campus and the opportunity for students to engage the surrounding diverse community.

While the board of trustees struggled with keeping Saint Paul going, Hamilton was also president of the board. Even though he resigned as president before the decision came to a vote, "it had the appearance of a corporate takeover," said Frank L. Dorsey, a graduate of Saint Paul who has been on the board and taught as adjunct faculty.

"Saint Paul was a free seminary. It spoke from a prophetic and progressive voice. In this move, that will be lost," Dorsey added.

"I profoundly regret the move of Saint Paul School of Theology from the Truman Road campus," said the Rev. Tex Sample, who taught at the seminary for many years. "The Church of the Resurrection doubtlessly offers new opportunities and possibilities, but it cannot, in my opinion, match the more significant offerings of the location of the school on Truman Road."

He also said the present location was in excellent condition, having undergone an investment of more than $20 million in renovations to make it a "first-rate" facility.

"It is now considering a sale of this campus for the price of $2 million," Sample pointed out. 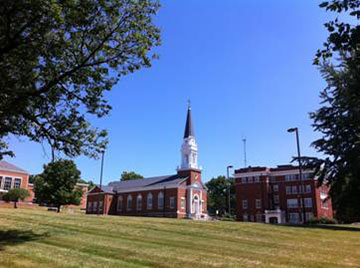 Saint Paul School of Theology has moved from Truman Road, a diverse, poor urban neighborhood, where it has been since the 1900s. Photo by the Rev. Mark Conard.

The Rev. Lovett Weems, Saint Paul's president from 1985 to 2003, expressed disappointment over the situation.

"Saint Paul has gone through many chapters in its history far more difficult than those of recent times without leaving the city and the seminary's superb campus," said Weems, now Distinguished Professor of Church Leadership at Wesley Theological Seminary in Washington.

"The move is a very sad and unfortunate development. There are some benefits but, from my perspective, not many when compared to the incalculable losses."

A Facebook page, "Save Saint Paul School of Theology," was started by Jan Rhind, a 1983 graduate of the seminary, as a forum for discussing the relocation.

Sally Firestone, a board of trustee member for 21 years, pointed out during a board meeting that the seminary dealt with critical financial challenges in the 1980s.

"Saint Paul was deeply in debt and borrowed all that remained in its line of credit so the staff and faculty could be paid," she said. "Everyone pulled together so that the school could continue. Balanced budgets were celebrated."

She said at that time the board did serious considerations of whether to keep the campus knowing it would require millions of dollars for renovations.

"The decision was made to stay in a part of the city that would have been easy to abandon. In staying, Saint Paul became an active contributor to the healing of the community."

Business owners were disappointed to hear the seminary was leaving a neighborhood that had come to see it as the bright spot. Negotiations are under way and McCoy is hoping to have a final sale by the end of the year.

"Our goal is to bring new tenants or owners of the property that will be positive members of the community," he said.

In addition to a new location, Saint Paul will also soon have a new president. McCoy announced he will step down in June 2014.

"I did not expect to retire from doing this kind of work," he said. "I am at an age where really my preference is to get back into a local church. I want my last chapter to be working on making more disciples for Jesus Christ."

Saint Paul School of Theology will remain an independent, autonomous institution distinct from the United Methodist Church of the Resurrection legally and financially.

The Association of Theological Schools, the Higher Learning Commission and the United Methodist University Senate require the institution's independence to be fully accredited, said the Rev. Myron McCoy, president of Saint Paul.

"In general, theological schools (not just United Methodist) are being severely impacted by shrinking enrollments and rising costs," said Gwen Purushotham, top executive of the Division of Ordained Ministry, United Methodist Board of Higher Education and Ministry.

Daniel Aleshire, director of the Association of Theological Schools, speaking at the Sept. 3 convocation addressed the struggles, pain and questions. The association is an accrediting organization open to multidenominational and nondenominational schools.

"Saint Paul will put a sign on this (Church of the Resurrection) campus directing people to the buildings where it will conduct an educational program, but the school is leaving its history as a landowner for a future as a sign owner," he said.

Leaving was not easy, Aleshire said, but it gives the denomination "an amazing creative possibility."

"Many of the questions faced by this seminary are shared by other schools looking for answers to growing problems," he explained. "Last year, 60 percent of all freestanding theological schools that are members of the Association of Theological Schools had deficit budgets."

Having a close connection with a large-membership church offers theological opportunities to learn about program development and program staff, which hasn't received a lot of attention from the denomination, he said.

The Rev. Mark Conard, a 1974 Saint Paul graduate, said, "It's easy to take potshots at Adam (Hamilton), but he has done all kinds of creative things at (Church of the Resurrection) to connect schools in challenging areas and to do ministry in ways most of us can only just imagine.