United Methodist churches should return to more local leadership, including licensed local ministers who would become eligible for ordination under recommendations a ministry commission wants the church to discuss for four years.

“The church’s mission will be well-served by … recovering the distinctive ministry of ‘traveling’ and ‘local’ ordained ministers,” said members of The Study of Ministry Commission in “A Sacred Trust: A Theological Framework for Ordained Ministry in The United Methodist Church.”

The current commission has been working since 2016. Staff from United Methodist Board of Higher Education and Ministry support the commission’s mandate and work under the direction of its leadership to organize their meetings along with other responsibilities.

“Imagine clergy peers gathered for mutual encouragement and formation, some of them grounded locally,” said the Rev. Tom Rand, a commission member, during a presentation Jan. 24 at the Omni Hotel at the Pre-General Conference 2020 briefing. “Others are itinerant, but all of them are invested in one another’s well-being and in helping their community thrive.”

A lay leader for the Mississippi Conference and member of the commission praised proposals for a stronger role for laity.

“I am excited and hopeful … about moving back toward expanded roles for laity,” said LaToya Redd Thompson. “I expect our report to prompt thought and study and eventually some good legislation, not only concerning the ministry … of the ordained, but also on the partnership of the ordained with lay ministers and local pastors and how together they can best facilitate ministry in this rapidly changing world where people desperately need greater intimacy with God.”

The new report is critical of the current system.

“Our current approach to licensing, ordination and conference membership does not align well with our history, polity and theology of ordained ministry — and as a result, our sacred work is hindered,” the report said.

During his presentation, Rand said that “at its roots, Methodism was a lay-led movement.”

“Over time we have become more and more clergy-centered and more clergy-dependent to the point that we cannot even conceive of a church that does not have a clergyperson,” said Rand, pastor of Sylvania First United Methodist Church in Ohio. “And the weight of sustaining all those clergy is becoming increasingly heavy to bear.” 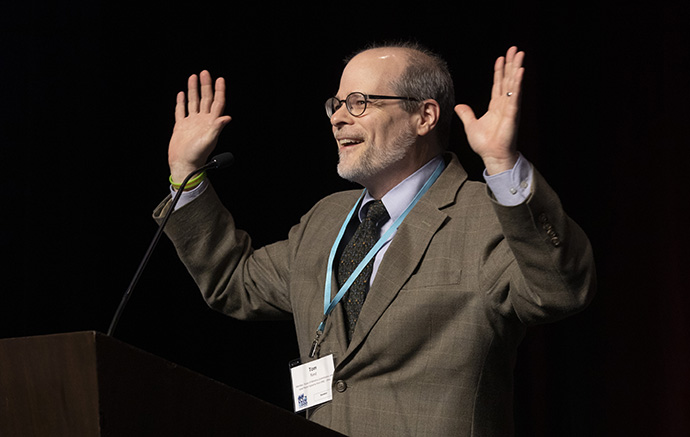 The Rev. Tom Rand, member, Study of Ministry Commission and lead pastor, Sylvania (Ohio) First United Methodist Church, speaks at the 2020 Pre-General Conference Briefing in Nashville, Tenn. Photo by Kathleen Barry, UM News.
Historically, lay people were more prominent in Methodist life. The majority of Methodist preachers were lay when the church first spread in Britain, Ireland and the American colonies. Over time, clergy came to dominate, and in the 1976 Book of Discipline the role of the “lay pastor” was replaced by “local pastor.”

The “Sacred Trust” report imagines a future where licensed local pastors would be ordained, lay people would have more responsibility and more itinerant clergy would serve multiple churches in a given area.

Licensed local pastors would welcome a path to ordination, and would also like to have more voting rights, said the Rev. Dave Owsley, president of the National Fellowship of Associate Members and Licensed Local Pastors.

Under the current Book of Discipline, a licensed local pastor is qualified to vote for delegates to jurisdictional and general conferences when they have completed their basic education and served under appointment for the past two years. They cannot serve as delegates or vote on constitutional amendments.

“The church is changing and in many conferences the number of local pastors has grown significantly in the past 15 years,” said Owsley, pastor at Odessa First and the Wellington United Methodist Church in Missouri. “We believe providing recognition and voting privileges for local pastors will make The United Methodist Church stronger as more of our clergy will be involved in the decisions we face in the future.”

The National Fellowship has submitted legislation requiring completion of Course of Study or a master’s degree in a theological discipline for a local licensed pastor to be ordained. If conference officials wish to examine candidates in some way before ordination is approved or rejected, the National Fellowship has no objections, Owsley said. The ministry study commission asks the church to consider the requirements for ordination of local ministers as part of the discussion.

“In our proposals, such ordination would be without guarantee of appointment and the pastor would not itinerate,” Owsley said. “It would place us on a more equal standing within the religious communities where we serve.”

As the wife of a part-time local pastor, Redd Thompson said the educational requirements for ordination can be challenging.

“We face the need to think through a logical, functional structure of clergy that meets the needs of local congregations and their communities and, while perhaps challenging, is practical for those committed to their calling,” she said.

The report also asks the next commission to contemplate the best roles for deacons, elders and local licensed ministers. It calls for deacons to be able to administer sacraments without having to get permission from the bishop. 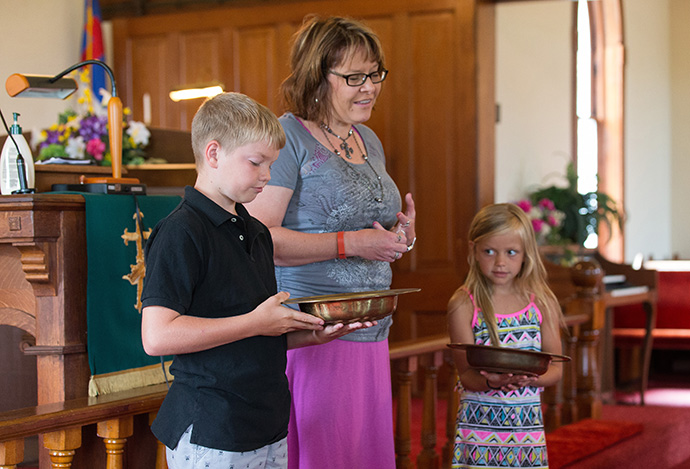 Pastor Laura Vincent (center) prays with collectors Zane Barnt (left) and Adison Embrey before they receive the offering at Shiloh United Methodist Church near Clinton, Ky. A 2015 file photo by Mike DuBose, UM News.
Currently, only elders administer the sacraments by virtue of their ordination. To administer the sacraments involves not only presiding, but also making sure all things related to the sacrament in the life of the congregation are properly cared for. Deacons may preside at Holy Communion, but only within their ministry setting and then only if they have obtained the bishop’s permission to do so because of missional need.

“The role of deacon is, therefore, sacramental, though distinct from the role of the elder,” the report said. “Our theological understanding creates space for deacons, by virtue of their ordination, to administer the sacraments.”

In practice, United Methodism has already moved toward less distance between the roles of elders and deacons, said the Rev. Anne Burkholder, one of the three writers of the report and associate dean of Methodist Studies at Candler School of Theology at Emory University.

“We’ve currently got a deacon leading a new church start in Ohio, with sacramental responsibilities given to her by the bishop,” Burkholder said. “We’re already blurring all of these edges.”

Blurring those edges could cause problems, said the Rev. E. Byron Anderson, associate dean of institutional and educational assessment at Garrett-Evangelical Theological Seminary.

“I think that’s a misunderstanding of historically as well as ecumenically of the ministry of the deacon,” Anderson said. “The ordination of elders was especially for the sacramental ministry.”

Also, the change would “undo years of ecumenical conversations” with the World Council of Churches, Evangelical Lutheran Church in America and The Episcopal Church on issues including the roles of deacons and elders and sacramental ministry, Anderson said.

The Liberation Methodist Connexion is getting off the ground before the United Methodist General Conference takes up a proposed formal separation.
Church Growth

United Methodist clergy age study shows modest growth period has been followed by drops in the number of both men and women elders under age 35.
General Church

After a decade of service, Thomas Kemper leaves the United Methodist Board of Global Ministries with stronger international ties.