The process for the writing of the first United Methodist Social Principles in 1968 was done in a room by 12 men who were mostly scholars and all from the United States.

“From the beginning, we decided because the church has changed so much that we would change the process to be more open and diverse,” Miller said. “We had a lot of good conversations and now we need to open it up and allow lots of other people to comment on what is a work in progress.” 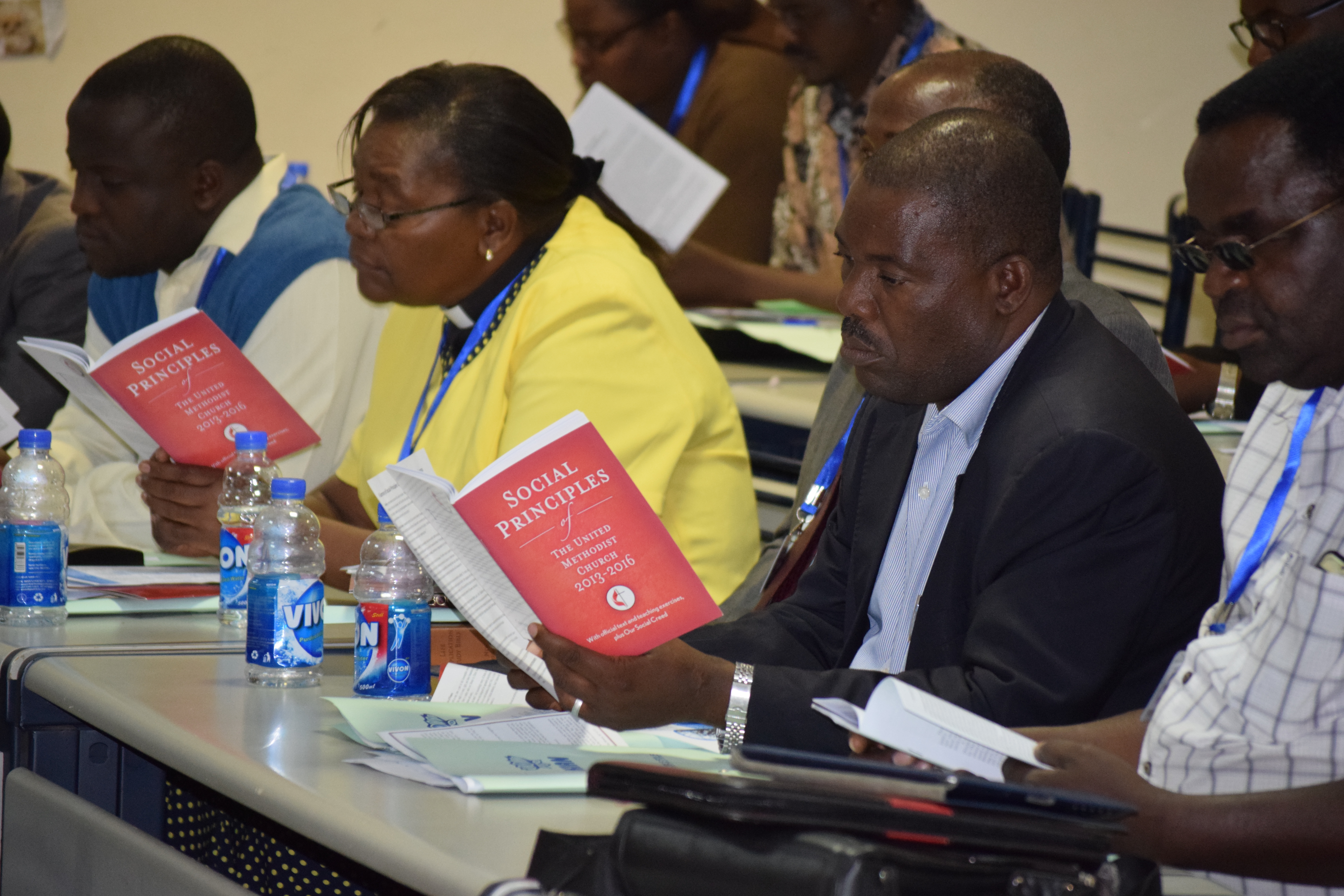 Attendees study of a Social Principles Training at Africa University in 2017 study their copies. File photo courtesy of Church and Society.

The draft and subsequent materials are available in English, French, Portuguese and Swahili, said Tricia Bruckbauer, director of communications for the board. People can weigh in on the draft until the end of August. At that point an editorial team will compile the feedback and edit the document for presentation to the Board of Church and Society.

The board ultimately hopes to bring the proposed revised Social Principles for a vote in 2020 at General Conference, the denomination’s top policymaking body.

Six writing teams, assigned to the six sections of the Social Principles, worked on the draft, Miller said. The writing teams themselves also had global representation.

After consultations around the globe, Miller said it became apparent that the document contained many Americanisms that don’t make sense in other contexts.

For example, he said, the word “race” doesn’t have the same meaning in other places that it has in the U.S.

“It is not yet succinct and concise but we have tried to combine sections and make it less an encyclopedic list of every issue,” Miller said.

Readers of the draft will notice that two sections are not drafted: “Human Sexuality” and “Rights of Persons of All Sexual Orientations and Gender Identities.”

The board decided to wait until after the special session of the 2019 United Methodist General Conference, which will deal with issues of human sexuality.

“This has been a yearslong process, and we are excited about this next step,” said the Rev. Susan Henry-Crowe, top executive of the United Methodist Board of Church and Society. “I am grateful for the hundreds of United Methodists who have devoted time to this endeavor in service to the Church, and urge everyone to read the draft and submit feedback.”

An online portal has been set up to accept comments from anyone with access to internet. Staff will also be traveling to almost every episcopal area in the central conferences — church regions in Africa, Europe and the Philippines — to hold in-person dialogues about the draft. In the U.S., Church and Society chairs in the conferences will hold dialogues.

“Midway through the summer, we will be releasing a report highlighting themes that we are seeing in the comments,” Bruckbauer said.

Miller said he taught the Social Principles for many years and in the beginning of this process felt they were in good shape and just needed some “tweaking.”

“But I really heard in two consultations in Mozambique and the Philippines that while basically fine, they are wrapped in a lot of explanations that come out of the U.S. context and don’t apply. Our task will be to hear what still needs to be revised.”