Some residents of the Bethany memory care unit can’t remember their loved ones’ names, much less the unit chaplain’s.

But when retired United Methodist Bishop Kenneth Carder preaches, they lean in.

“He really captivates them in those worship services,” said Rene Driggers, director of memory support for the Heritage at Lowman, the senior community near Columbia, South Carolina, that includes Bethany. “They listen. They sing. They do a lot of things they haven’t done in a long time.”

Carder, 75, once led entire conferences of The United Methodist Church, with tens of thousands of members, and hundreds of clergy.

Now he’s interim chaplain at Bethany, his flock consisting of 40 elderly, forgetful people, whom he visits, leads in worship and sometimes helps feed.

Carder gets only a stipend, but feels extravagantly rewarded.

“I meet Jesus daily at Bethany,” he said. “Serving as a pastoral presence at Bethany is one of the most profound and richest experiences of my life.” 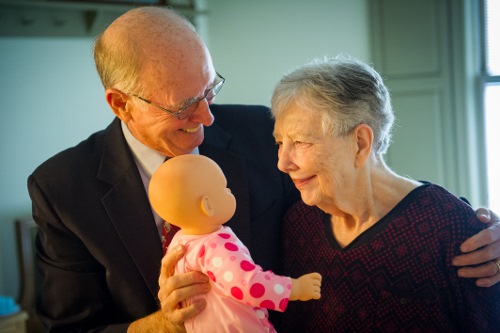 Carder’s wife of 55 years, Linda, has advanced dementia and is a Bethany resident. He lives across the street in the retirement home they shared until May 7, 2015.

Putting her in the memory care unit was one of the hardest decisions of his life.

“I could no longer make sure she was safe and cared for properly, even with help coming into the home,” Carder said. “And it was taking a toll on me to be ʽon’ 24/7, as my daughters reminded me.”

Carter wrote the Bethany staff a 1,000-word letter, sharing Linda’s story and theirs together.

Carder grew up in a sharecropping and textile worker family in the east Tennessee hills. He wrote: “Linda’s unconditional love, strong encouragement, and persistent support moved me out of my shell of inferiority created by childhood poverty.”

By any account, Carder has made a mark, earning three college degrees, leading a range of churches and serving as bishop of the Mississippi and Tennessee conferences. After retiring from the episcopacy in 2004, he joined the faculty of Duke Divinity School, in Durham, North Carolina.

About 10 years ago, his wife began to falter at the family bookkeeping she’d always done so well. She struggled with menu choices, and there were other signs.

“It became more difficult to do things that required sequencing, even putting on clothes,” Carder said.

In 2009, Linda Carder was diagnosed with frontotemporal dementia – an umbrella term for disorders affecting the brain’s frontal lobes.

Carder gradually detached from Duke to be Linda’s caregiver. By 2011, they had moved to the Columbia area to be close to their daughters, Sheri Carder Hood and Sandra Carder Nash.

The role reversal was well underway, with Carder doing the cooking and other housekeeping, as well as providing physical care for his wife. He began studying what they were up against, too.

“The way he reacts to things is he likes to delve in, educate himself,” said daughter Sheri. “He’s probably read every book out there on dementia.”

With Linda’s illness progressing, the couple moved from a subdivision to the Heritage at Lowman, choosing a house across the street from the Bethany memory care unit.

Carder visits Linda three times a day for meals, often feeding her himself. But he’s had more time to take on a broader ministry to dementia patients and their families.

“She’s been my primary vocation since her diagnosis, but I felt the real question is: How do I live out my discipleship and calling in this context?” Carder said.

One way was to start a support and study group for spouses of people with memory loss. Then, this January, Carder organized and co-taught “Dementia through a Pastoral Theological Lens” at Columbia’s Lutheran Theological Southern Seminary.

The class met at the Heritage at Lowman, and the students spent time with the Bethany residents.

“The staff began telling us, ʽThis is wonderful that you’re having students come in, because we don’t see pastors over here very often,’” said Norma Sessions, a social worker who helped teach the course.

Carder had come to know the Bethany residents through his daily visits. About four months ago, he agreed to fill Bethany’s open position as chaplain.

Since then, he’s stepped up his visiting around the unit, and made himself available for family consultations. He offers friendship and support to staff.

“They are my heroes,” he said. “They demonstrate true servanthood. “They not only wash (residents’) feet, they wash their bottoms.”

On Thursday morning, Carder gives a Bible study in the activities room. Sunday mornings, he leads residents in worship.

That’s where the best surprises have come.

“On Sundays, I always use the Apostles’ Creed, and I’d say 50 percent can recite it without missing much,” Carder said. “Probably 80 percent can pray the Lord’s Prayer, even when in normal conversation they cannot put a sentence together.”

Familiar hymns draw them out too, and Carder was thrilled to hear one woman singing “Amazing Grace” in her native Portuguese – a language she hadn’t spoken in years.

Carder recently reintroduced communion at Bethany. Some residents struggled, so he dipped the bread for them and put it in their mouths.

“It’s a very intimate experience, as the last supper had to be with Jesus and his disciples,” Carder said. “That sacrament originated in the midst of suffering and vulnerability.”

As for sermons, Carder keeps them short and interactive. On Father’s Day, he preached on the parental nature of God’s love, leading residents to speak up about their own fathers.

On Pentecost, Carder used the Acts account, and when he described the “rush of a mighty wind” one man called out, “Oh, my Lord!”

“He got into it, and that ʽrush of a mighty wind’ he thought was quite spectacular,” Carder said. “I just stopped and told him, ʽI’ll bet some people there (at Pentecost) said the same thing.’ ”

Carder’s daughters agree that his chaplaincy is consistent with his earlier work, including addressing poverty as a bishop and starting a prison ministries course at Duke.

“His big thing has always been focusing on the ʽleast of these,’ and he’s just extended that to those with dementia and Alzheimer’s,” said Sandra Nash.

Retired Bishop Kenneth Carder offers advice to pastors and churches ministering to those with dementia and their families:

1. Identify and be present with those in the congregation affected by dementia as patients, family or caregivers.

2. Provide education on dementia and help remove its stigma.

3. Include people with dementia in the life of the congregation.

5. Help preserve memories for those whose memories have faded.

6. Proclaim in word and deed that human identity and worth are held by God and do not lie in capacities, including cognition and language skills.

7. Advocate for healthcare policies that consider those with dementia.

As for relevant theological books, Carder recommends John Swinton’s “Dementia: Living in the Memories of God.” Carder also says the Wesley Covenant Prayer has been sustaining to him as a caregiver.

Carder is passionate about the church’s need to be more engaged with dementia patients and their families. Some 5.4 million Americans have Alzheimer’s Disease, dementia’s most common form. That number will likely rise fast as more Baby Boomers reach their late 60s and 70s.

“In the mainline churches, like United Methodist churches, membership is older than the population,” Carder noted. “We have a disproportionate number of people who have dementia.”

Carder does not sugarcoat his and Linda’s experience. For a time, she was belligerent. Though that’s passed, her memory loss is severe.  Carder’s Bible reading has in recent years leaned toward Psalms of lament, and the book of Job.

But for all the heartache, Carder said there have been many blessings, including witnessing loving conduct among Bethany residents.

One resident is blind, and two others faithfully lead him around.  Another resident who used to be a nurse still likes to be useful, and with Carder’s permission makes Linda’s bed.

And, at one Sunday service, the blind resident delighted Carder by belting out an obscure verse of “Jesus Loves Me.”

“I’d never sung that verse until he taught it to me!” Carder said.

Dementia is a form of exile, but the potential for community in a memory care unit exceeds what most people understand, Carder insists.

Carder is still learning the one he calls “love without reciprocity.”

“Linda can no longer express love to me in the way she has for most of the 55 years we’ve been together, but I can love her without any expectation of return,” he said. “I do that imperfectly. God does it perfectly. That’s what agape love is.”