When a tornado barreled through Kokomo, Indiana, on Aug. 24, it left a thriving community service program started by a United Methodist pastor on hold.

Kokomo Urban Outreach, which works in 40 neighborhoods across the city of about 57,000, lost several buildings on its campus, including a food pantry and a community center for children, said the Rev. Jeff Newton, founder, and the pastor of Trinity United Methodist Church.

The National Weather Service reported 21 confirmed tornadoes on Aug. 24, 10 in northeastern Indiana and 11 in northwestern Ohio. The six tornadoes in central Indiana included one that followed the path of a previous tornado in Kokomo, in November 2013, which also caused major damage. “We just barely finished rebuilding and this time it’s worse,” Newton added. 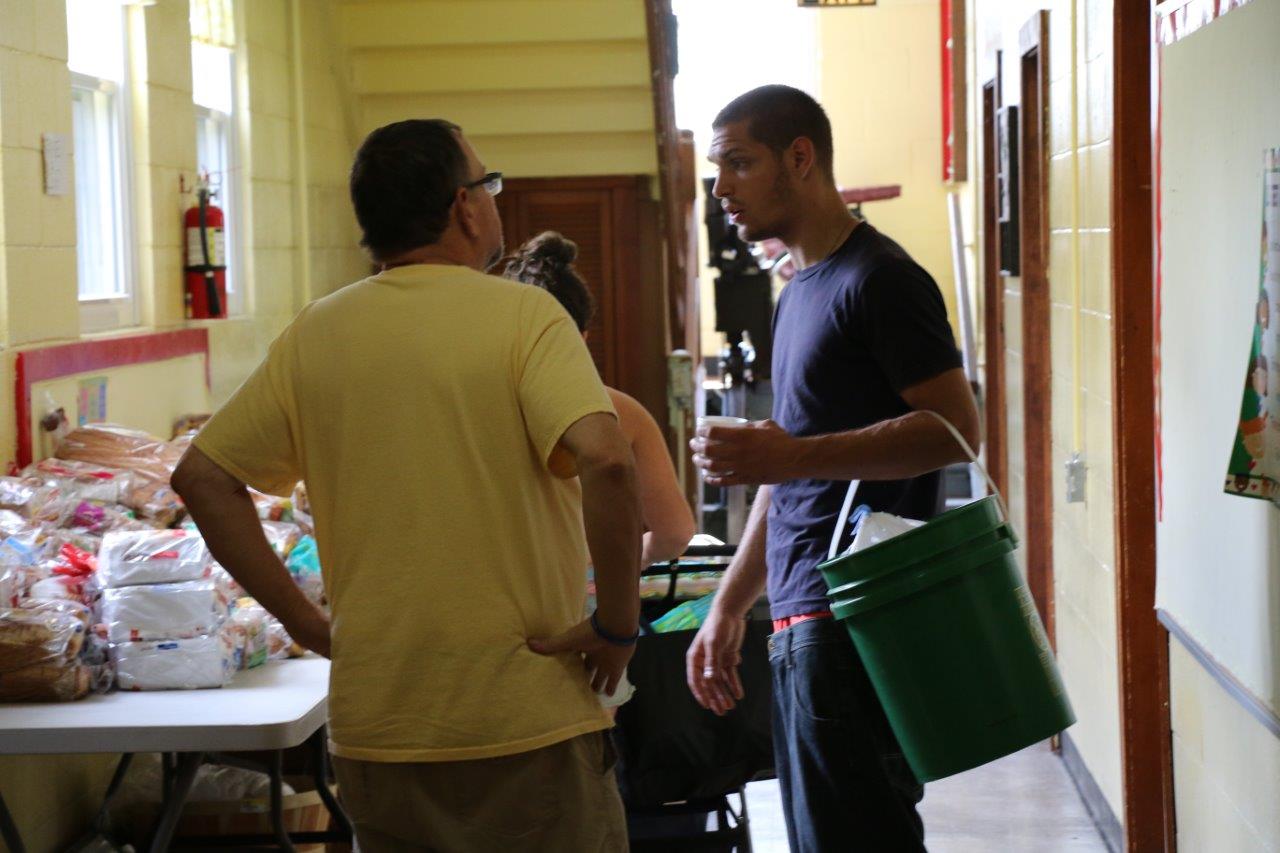 The Rev. Jeff Newton, left, pastor of Trinity United Methodist Church, helps a Kokomo family stock up on food and other supplies after the recent tornado that displaced many in the community. Photo by Skyler Nimmons

Beth McDaniel, United Methodist Volunteers in Mission coordinator for the Indiana Conference, has seen the toll that has taken on residents there. “It’s really been a double whammy to many of these families,” she explained. “Just when they were starting to feel normal and safe, they got wiped out again.”

Further north in the state, a “historic” rainfall on Aug. 15 had a disastrous impact on the city of South Bend. About 1,000 homes were flooded, with more than 100 already declared total losses.

“It was worse than what we had anticipated,” said the Rev. Mike Irvine, acting disaster response coordinator for the denomination’s Indiana Conference.

Two $10,000 grants from the United Methodist Committee on Relief, approved this week, will assist the conference in responding to the twin disasters.

In South Bend, assessment and cleanup is just beginning. Irvine, the senior pastor of Linton United Methodist Church, west of Bloomington, said the North Central Jurisdiction’s disaster response coordinator helped put out a request for Early Response Teams for South Bend. In response, he received calls from Michigan, Ohio and Illinois. Aug. 30 was the first day to have a United Methodist team “be boots on the ground” there.

“There will be a definite need for long-term recovery,” he said. “After the ERT phase, you’re probably looking at a good 18 months.”

How You Can Help

Donations to assist with the disaster responses in Indiana and other parts of the U.S. can be made to UMCOR through United States Disaster Response Advance #901670.

Emergency Response teams interested in volunteering in South Bend can contact the Rev. Mike Irvine by email at [email protected].

Beth McDaniel, who can be reached by email at [email protected], is helping coordinate the Stephen ministers volunteers.

Progress has been made in Kokomo, Irvine said, where the community remains organized after coping with earlier flooding and the previous tornado. “There’s really no need for any kind of early response,” he explained. “It’s done. They are meeting about going into long-term recovery right now.”

McDaniel agreed that cleanup was moving fast. Last week, she noted, many city streets were impassible the day after the tornado struck. Nearly a week later, yards were mowed and the area near Trinity United Methodist Church “looked as pristine as you could imagine but for the roofs off the apartments.”

Trinity Church is a small, diverse congregation with “a lot of folks that struggle with lots of things here on a Sunday morning,” Newton said.

But it has served as a community hub since the tornado, where daily meals are served and supplies distributed, including the Walmart gift cards that McDaniel brought Aug. 31. Residents will use those cards as supplements to the additional food stamps authorized to replace food lost when the power went out for several days, she explained.

Besides the gift cards, McDaniel is using UMCOR grant money for food, paper products for meals and cleaning supplies for residents “so that they can start cleaning up their own property.” The church also has rented a few dumpsters where people can place smaller household items that need to be discarded.

A particular effort has been made to bring in Stephen ministers to listen to those who are coping with the aftermath and who also suffered through the anxiety of multiple tornado warnings and separation from their children when they were evacuated from schools to the mall that day, Newton said. Losing the children’s community center, he added, “is devastating to the children.”

Newton’s immediate goal is to restart Kokomo Urban Outreach’s programming within the next week or two. “We have some plans for the future that we’re uncertain about,” he admitted. “We’re going to stay here in the neighborhood, but we’re not sure what kind of facilities we’re going to have yet.”

In an E-pistle message after the South Bend floods, outgoing Indiana Area Bishop Michael J. Coyner recalled his own experience with the 1997 floods in Grand Forks, North Dakota. Prayer, he wrote, “is the best and first response to disaster,” followed by giving and helping. “We United Methodists have the perfect mechanism for giving through UMCOR where 100 percent of the gifts go to help persons in need,” he wrote.