Religion is back on campus, but in forms that might surprise those thinking only in terms of the traditional roles of organized churches in higher education.

The science-oriented Massachusetts Institute of Technology has hired its first paid chaplain, overseeing 22 volunteer chaplains, whose goal is to make sure students of all faiths are comfortable with each other.

At the University of Southern California, a young Hindu lawyer is dean of the Office of Religious Life; his predecessor was a female rabbi.

Even the Mormon church's Brigham Young University has a prayer room for the small number of Muslim students who have enrolled there, taking comfort in the school's conservative values.

These are among the findings from two professors at Messiah College in Grantham, Pa., who spent four years visiting 50 public and private schools of higher education, ranging from small community colleges to large research universities.

For Douglas "Jake" Jacobsen and Rhonda Hustedt Jacobsen, the research confirmed what they already suspected, as they recount in their book, "No Longer Invisible: Religion in University Education," to be published Aug. 1 by Oxford University Press.

The Jacobsens looked at a broad spectrum of religious belief - from traditional practices to spirituality to pondering the big questions of life - and found evidence that attention to how religion already functions on the university level can enhance learning and improve higher education.

"To invite religion into the work of the university is something new - at least compared to recent history - but many colleges and universities are doing just that because they see its educational potential," they write.

Tuning in to religious matters

In a recent interview with United Methodist News Service, they shared some of their ideas and urged denominations like The United Methodist Church to take on a larger role in higher education. The point, they said, is not to add but rather to become attuned to religious and spiritual matters "already embedded in the work that colleges and universities do."

Over 36 years of marriage, the two professors often have discussed the intersection of religion, psychology, philosophy and education. Rhonda Jacobsen, a former public school counselor, is director of faculty development and teaches psychology, while Jake Jacobsen is distinguished professor of church history at Messiah College, founded by the Brethren in Christ, which is related to Mennonites and the Church of the Brethren.

Their work together on two other books for Oxford University Press, published in 2004 and 2008, prompted the Lilly Endowment to offer a grant to pursue research for the new book. The Jacobsens are now co-directors of the endowment's Religion in the Academy Project. 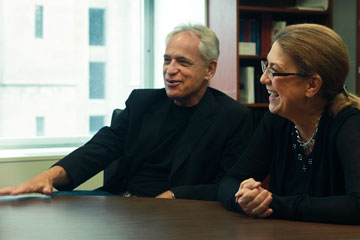 The Jacobsens' research finds that religious life is thriving on campus.

The couple coined a new term for their book "pluriform" to refer to the fact that religion is more complex and multifaceted than ever in contemporary America.

"A Methodist kid may go to a Baptist Bible study but also may like Buddhist meditations," Rhonda Jacobsen explained.

The cultural shifts that have reshaped American religion also have allowed colleges and universities "to re-engage religion" in ways that would not have occurred 30 or 40 years ago.

"There's an awful lot of religion on campus that is not labeled as such," Jake Jacobsen said. With more of a focus on ethics and morals, he added, "Learning in higher education has gone from very subject-centered to student-centered."

They cite Penn State University as a prime example of a major public university taking the lead on student-centered religious life, despite the recent sexual abuse scandal. "They're doing things that many other public universities haven't figured out yet," Jake Jacobsen said.

The focal point is the Pasquerilla Spiritual Center, built in 2003 entirely from private donations, with a movable 750-seat worship area and offices for the university's 60-plus religious and secular/ethical student organizations. Overseen by the Center for Ethnics and Religious Affairs, the goal is to move beyond religious tolerance "to a genuine appreciation of and respect for religious and spiritual diversity."

Penn State football coach Joe Paterno, dismissed in the wake of the sexual abuse scandal involving the now-convicted Jerry Sandusky, was instrumental in getting the center built and contributed $1 million of his own money, the Jacobsens said. The center helped organize a candlelight vigil for the abuse victims and served as the site of Paterno's funeral after his January 2012 death from cancer.

The Jacobsens weren't expecting to see such dedication to diversity when they visited the Air Force Academy in Colorado Springs, which has been publicly criticized for over-evangelization. Yet, they met an Amish cadet from Pennsylvania who is getting support for her goal to become a chaplain, and toured the Catholic chapel, Jewish synagogue and Buddhist meditation room underneath the well-known Protestant chapel. A Wiccan shrine is perched outside on a mountaintop.

The academy has what the authors call a "house of representatives" religious model, with influence based on representation and worship space "sort of proportional to the number of students who come from that tradition," he said.

Other university setups include the "state church" model with the chaplain overseeing both campus and congregation, as with The United Methodist Church at Duke University; the "senate" model seen at Wellesley College with equal representation regardless of size; and the "one-party rule" model, ranging from Brigham Young to the more diverse Catholic-oriented University of Notre Dame.

Whatever the model, interfaith etiquette "relies on the school's ability and willingness to serve as a good host," they write, and by recognizing the school's religious or non-religious particularity, "this hosting function may become more straightforward and more generous."

The Jacobsens believe their book will be helpful to those in academia, religious groups and even parents of college-bound students. "We hope our book will give educators, whether they are people of faith or not, a vocabulary for identifying what is happening on campus," she said.