The Nov. 10 decision by The United Methodist Church's top court to reinstate Bishop W. Earl Bledsoe and reverse his involuntary retirement has church leaders trying to determine what happens next.

"I'm grateful to God for the results," Bledsoe told United Methodist News Service. He said he and his wife, Leslie, "have dedicated our entire life to the cause of making disciples of Jesus Christ, and whatever the outcome, we were going to continue to do that until the Lord calls us home."

However, he added, "We don't know what the next step is. &ellipsis As far as where we'll be assigned, we don't know."

He joined other leaders reached by United Methodist News Service in noting the situation is unprecedented.

The United Methodist Judicial Council ruled that Bledsoe, who previously led the North Texas Annual (regional) Conference, "is entitled to an immediate assignment to an episcopal area within the South Central Jurisdiction&ellipsis ."

The ruling also directed Don House, the chair of the South Central Jurisdictional Committee on Episcopacy, to report to the Judicial Council on how its order has been carried out by Feb. 17.

The Judicial Council ruling follows the decision this summer by the episcopacy committee, affirmed by the South Central Jurisdictional Conference, to compel Bledsoe's retirement.

Bledsoe said one likely candidate for his next assignment is the New Mexico/Northwest Texas Area, which encompasses two conferences of the same name. Retired Bishops Dan Solomon and William "Bill" Hutchinson serve the area currently as interim episcopal leaders.

The Rev. Jimmy Nunn, director of mission and administration for the Northwest Texas Conference, said in a Nov. 12 statement: "We wish to express gratitude to the members of the Judicial Council for their work. We appreciate the leadership that Bishop Solomon and Bishop Hutchinson have provided the episcopal area, and we will welcome a new bishop when assigned."

House said he is uncertain who the decision-makers would be in this situation.

"I feel very confident that it is not our committee," he said. "Our committee merely recommends, and it is the jurisdictional conference that, under normal conditions, makes the assignment."

He raised the possibility of a special called session of the jurisdictional conference or that the South Central Jurisdiction College of Bishops (that is, all the bishops in the jurisdiction) could assign Bledsoe.

"What I hope will happen is the college of bishops has that authority and can make that assignment," House said.

House's committee is not scheduled to meet again until next February.

Houston Area Bishop Janice Riggle Huie, the president of the South Central Jurisdiction College of Bishops, cited in a statement Paragraph 406.1 in the Book of Discipline, the denomination's law book.

The paragraph requires a jurisdictional committee on episcopacy, in consultation with the college of bishops, to recommend bishops' appointments "for final action by the jurisdictional conference."

"The circumstances before us are new ground," Huie said. "All of us in the college of bishops remain in prayer for Bishop Bledsoe and Leslie, the jurisdictional committee on episcopacy and the South Central Jurisdictional Conference."

Oklahoma Area Bishop Robert E Hayes Jr., a member of the college and the Council of Bishops secretary, said the college of bishops is trying to schedule a conference call on Nov. 15 or 16 to discuss the situation.

"Everybody right now is making sure the T's are crossed correctly and the I's are dotted," he said. 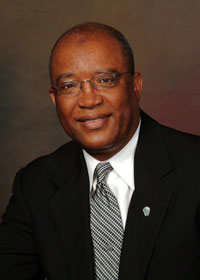 Bledsoe, 62, initially announced plans to retire at the end of his first four years as bishop. But on June 5, he reversed course, telling those at the North Texas Annual Conference session he planned to fight being forced out. Days later, the episcopacy committee released a statement explaining why it had asked Bledsoe to retire early.

After a hearing on July 16-17, the episcopacy committee decided by a vote of 24-4 with two abstentions to place Bledsoe in involuntary retirement. The 30-member committee included a lay and clergy member from each of the jurisdiction's 15 current conferences.

Bledsoe later that month appealed the decision to the Judicial Council.

At issue in the appeal was whether Paragraph 408.3(a) of the Book of Discipline passed muster under the denomination's constitution and whether the episcopacy committee followed fair process.

Paragraph 408.3(a) says that a jurisdictional episcopacy committee, by a two-thirds vote, can place a bishop "in retired relation" if the committee finds it "to be in the best interests of the bishop and/or the Church." A variation of this provision for jurisdictional episcopacy committees has existed since the 1976 Book of Discipline. However, the Judicial Council had never before ruled on the provision.

In October, the Judicial Council narrowly upheld Paragraph 408.3(a) as constitutional. But in its November ruling, the church court cited "numerous errors in violation of the principles of fair process" and "the inability to articulate" what the "best interests" of the church or the bishop, or both, would be.

House said the Judicial Council's decision gave "clarity in how involuntary retirement can proceed within a jurisdiction."

He said he expects episcopacy committees could still use Paragraph 408.3(a) in the future.

"What that paragraph does is it gives a jurisdictional committee in the rare instances where we don't have an effective episcopal leader an opportunity to move them to a retirement status," he said. "And that's what I think the intent of the General Conference was in 1976: Let's find an avenue where a bishop is not stripped of their consecration papers but merely moved from an active status to an inactive status if it is in the judgment of the church to do so."

Bledsoe said he thinks General Conference, the denomination's top lawmaking body, would still need to define "what's in the best interests of the church" when determining whether to compel a bishop's retirement.

Black Methodists for Church Renewal Inc., the denomination's African-American caucus, had raised concerns about the evaluations of Bledsoe that led to his forced retirement.

"This decision from the Judicial Council has renewed hope for Black Methodists throughout this denomination that this church - The United Methodist Church - really does seek to be a place of equality and fairness for all of God's people," said the Rev. Ronnie Miller-Yow, the caucus' president.

"When pastors and church leaders are confronted with situations, we stand ready to be there and to bring a spirit of renewal and transformation," she added.

House said Bledsoe is "an upstanding spiritual leader." What the committee questioned, House said, was the bishop's administrative skills.

"I hope he surprises us all and becomes a very effective episcopal leader," House said. "That would be great for him and great for the church. &ellipsis My hope is in his new assignment he will be very effective. That is my hope and prayer."

Since his retirement on Aug. 31, Bledsoe said he and his wife have been involved in prison ministry and have been counseling young couples to leave behind simply "living together" for marriage. So far, two of those couples have married. He speaks with gratitude for bishops and other church members who have helped him and his wife make ends meet during this time.

His and his wife's experience has made an impact on their ministry, he said.

"We're a lot more sensitive to persons who are hurting and who feel they are shut out or locked out of the church," he said. "We've also learned to trust God in the midst of things."