Just before 2 p.m. on a recent Sunday, as ChristWay United Methodist Church’s fellowship was about to be over, a Congolese family with six children came to the church.

Other Congolese followed. They began singing hymns and gospel songs, accompanied by drums, while others were still gathering in the sanctuary.

Their worship service was filled with a celebrating spirit and hearts of gratitude.

The Congolese, members of the New Hope United Methodist Church, had many reasons for celebrating and praising God. One of those reasons: finding a safe haven here in the United States.

The Congolese members are refugees, forced to leave their country in order to escape war and persecution. Milwaukee Catholic Charities hosted and sponsored them as they found safety in Wisconsin.

“In 1996, my family fled to a refugee camp in Tanzania after my father and two sisters were murdered during the First Congo War,” said Edumakono Zetho, a seminarian and an associate pastor of the church. “I came to the USA in 2012, and seven months later, my mother, a sister and a little brother joined me.” 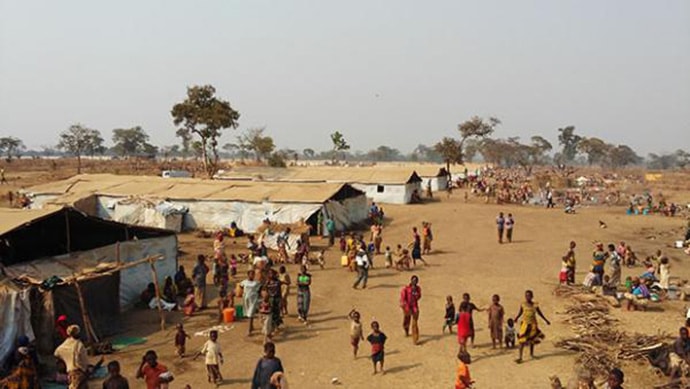 The Nyarugusu refugee camp in Northwest Tanzania was created in 1996 after some 150,000 refugees fleeing war in Congo crossed into Tanzania. Many Congolese families at ChristWay United Methodist Church spent time in Tanzanian refugee camps before making their way to the U.S. Photo by Church World Service.

There have been many crises and civil wars in the Democratic Republic of Congo. The First Congo War, which took place from 1996 to 1997, and Second Congo War from 1998 to 2003, were the deadliest and caused many casualties. The Second Congo War is known as the Great War of Africa or the Great African War, and sometimes referred to as the African World War, as it caused 5.4 million deaths — the deadliest conflict since World War II.

Zetho spoke of a need for healing and reconciliation of his congregation.

“Almost every one of the congregation has a similar life experience,” Zetho said. “They are carrying the baggage of hurt and trauma in their lives.” 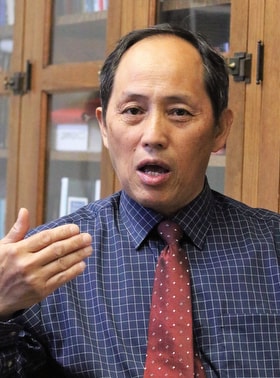 Chou Yang, one of the lay leaders of ChristWay United Methodist Church, explains the history and ministry of the church. Photo by Thomas Kim, UM News.

The ChristWay United Methodist Church is a refugee church as well, and its history is closely related to American foreign policy.

In May of 1975, near the end of the Vietnam War, the U.S. military pulled out of Laos and the country fell into the control of Pathet Laos, a communist political organization. The Hmong were in a desperate situation because they worked and fought against Pathet Laos on behalf of the United States.

“Some military families escaped to Thailand through a special U.S. airlift,” he said. “Some others escaped by boat, others by walking through the jungle. I was lucky to escape the country by car with my wife and two little children, who were three and one. I hired a guide to protect and lead us to Thailand across the Mekong River.

“We lived in a refugee camp for one and a half years and in October of 1976, my family finally and fortunately managed to come to Michigan,” he said. “I am now a retired electrician, and serving as a member of the trustees of the church.”

The late Rev. Jonah Xou Yang was colonel of the American secret army in Laos during the Vietnam War. He became the first Hmong clergy in the United Methodist Church after he came to America, and was the founding pastor of the Hmong Christian Community Church. He had to go through a fatal process of escaping from Laos.

Wisconsin Area Bishop Hee-soo Jung recalled hearing about Jonah Yang’s life story, which included a harrowing escape across the Mekong River. The pastor hid himself under the water plants, Jung said, while he witnessed his fellow Hmong relatives and friends killed by Laotian soldiers’ rifles. 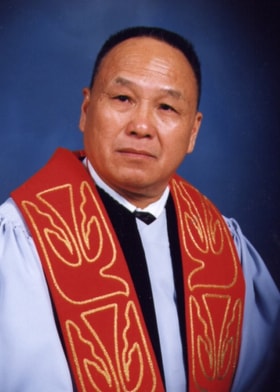 The late Rev. Jonah Xou Yang was a colonel in the American secret army in Laos during the Vietnam War. He became the first Hmong clergyperson in The United Methodist Church after he came to the U.S. and was the founding pastor of the Hmong Christian Community Church. Photo courtesy of ChristWay United Methodist Church.

As the Hmong community grew, they needed help getting settled and learning English and job skills. Even more importantly, they realized they needed to nurture and support each other spiritually in Christ.

“Due to the fact that the Emmaus United Methodist Congregation was aging and faced declining membership, the church decided to transfer the church building to Hmong Christian Community UMC ownership in 1999,” Chou Yang said. “Since then, the church has continued to grow both in membership and financially.”

At one time, the congregation was concerned about insufficient financial resources. Today, the problems include insufficient Sunday school rooms and parking spaces.

The church changed its name to ChristWay United Methodist Church to focus on its mission in 2009, and it is the largest Hmong church in the U.S. with 450 members. They are proud to have raised and educated two ordained pastors from the church.

The Rev. Cher Houa Yang was the first ordained Hmong pastor, and the Rev. Tsuker Yang is the superintendent of the North Central District in the Wisconsin Conference. 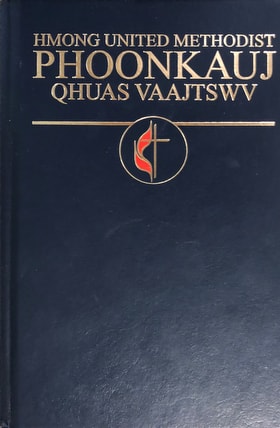 The Congolese connection started in 2014, when Steve Xiong, a member of ChristWay and director of the Refugee Resettlement Agency in Milwaukee became a sponsor for a Congolese family from Mozambique.

“I remembered that I was once a recipient of sponsorship from other American families a few decades ago, and I believed mission should be done everywhere here and abroad,” he said.

Later, he showed the Congolese family his church, and they started to worship there. Other refugees followed them, and the number of Congolese members grew quickly. The service was held in Hmong and English.

Eventually, both the Congolese at ChristWay and another group attending a Catholic church in Milwaukee felt a need for a Swahili-speaking faith community.

In January 2017, the ChristWay congregation decided to create and support a Congolese ministry in their church and share its facilities freely.

“To have a worship service in Hmong and English was wonderful,” Xiong said. “However, they needed to worship the Lord in their own language. So I asked the church board to create the Congolese Ministry and to support them. And the church agreed to do so.”

With the conference’s support, the church officially launched the Congolese Mission. “When we said to them, ‘Now it is your church as well,’ they were thrilled to have their church and their own service with their mother tongue!” Xiong said.

“Today New Hope Church gives the Congolese refugees the opportunity to worship in their languages, which includes Swahili, French, Kibembe and Lingala,” Zetho said. “The church also gives refugees hope to grow spiritually, and to experience healing physically and emotionally. As refugees together, we have bonded and support each other.”

Kim is director of Korean and Asian news at United Methodist Communications. Contact him at 615-742-5470 or [email protected]. To read more United Methodist news, subscribe to the free daily or weekly digests.

A free series of evening webinars April 26-30 will offer advice to church members on how to support people returning from prison and help them find gainful employment.
Local Church

A study of more than 20,000 United Methodist churches in the U.S. found that multiracial churches had higher worship attendance over time.