Editor's note: UPDATES with new information about similar Arkansas legislation, as well as comments from university presidents in Indiana.

Days of heated public discussion over the Indiana Religious Freedom Restoration Act — and whether it would allow businesses to deny services to gays and lesbians — have prompted reaction from Indiana United Methodists.

The Rev. Robert Fuquay, pastor of St. Luke’s United Methodist Church in Indianapolis, pointed out that church members have differing opinions about the law, whether they are within his 6,000-member Indianapolis congregation or part of the denomination at large.

“It’s hard to line up this law with our United Methodist teaching and practice. We have a social responsibility, even if it does cause friction within our churches….to speak out against it,” Fuquay said.

At the same time, he noted, the law provides “an opportunity for the church to practice true hospitality and welcome.”

Some United Methodist churches in Indianapolis, for example, are among the organizations and businesses posting signs making it clear they are open to all. The Indianapolis City-County Council also passed a resolution Monday night opposing the new law. 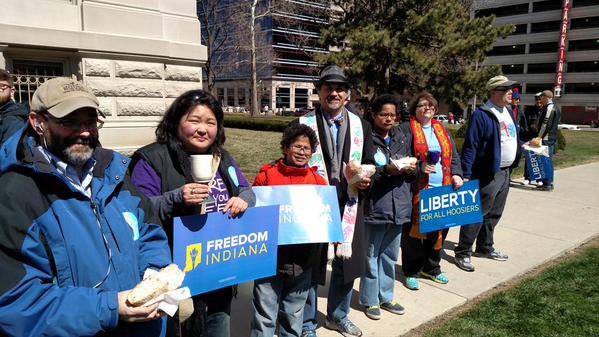 Fuquay spoke Tuesday with United Methodist News Service just before an 11 a.m. EDT press conference in which Indiana Governor Mike Pence said that while there was never any intent by the state to discriminate against gays and lesbians or anyone else, he could appreciate how “that’s become the perception.”

Pence said he was raised to treat others as he would want to be treated. “I believe in my heart of hearts that no one should be mistreated because of who they are, who they love or what they believe,” he said.

New legislation, the governor announced, will provide a fix to a “misunderstood” law and make “it clear that this law does not give businesses a right to deny services to anyone.”

The Arkansas House of Representatives passed a similar religious freedom bill March 31, but Arkansas Governor Asa Hutchinson said he would not sign it unless changes are made. Two Arkansas United Methodists —Bishop Gary Mueller and Carlotta Walls Lanier, a member of the Little Rock Nine, a group of students who desegregated Little Rock Central High School in 1957 — are among those who oppose the current version of the bill.

Concerns over that possibility have been raised ever since Pence signed the religious freedom legislation into law March 26.

About a dozen members of Broadway United Methodist Church in Indianapolis, including the Rev. Michael Mather, the pastor, joined hundreds of others during a March 28 rally opposing the law. “Some of us actually served communion there,” he said. “That was really a good experience.”

Mather said he believes the bill signed by the governor does encourage discrimination. Such a message, whether stated or implied, goes against Broadway’s mission statement to be a multicultural Christian community “that seeks, welcomes and values all people,” he added.

In an “Epistle” commentary posted March 30 after his return from a trip to Africa, Indiana Area Bishop Mike Coyner characterized the Religious Freedom Restoration Act as a reflection of fear rather than faith.

“People are afraid of change, and especially some persons who consider themselves to be religious are afraid that the changes in our society — most notably the legalization of same-gender marriages — may affect their freedom of religion,” he wrote.

Some of the angry reaction to the act also seems based on fear, he pointed out, although he noted that language “to verify that discrimination is unlawful” would have been helpful.

“As United Methodists our stance is clear as indicated in our Social Principles: We defend everyone’s right to freedom of expression of their own religion or personal faith,” Coyner wrote.

“We also believe all persons are of sacred worth, and so we oppose discrimination against anyone. We hope this law will not allow or encourage any forms of discrimination.”

The Rev. Beth Ann Cook of Columbus told United Methodist News Service that she was among the many United Methodists in the state “deeply grieved by the divisive nature of the debate” and misleading speculation about the new law.

Cook sits on the board of Good News, an unofficial United Methodist evangelical caucus. Its vice president, the Rev. Thomas Lambrecht, agreed the situation “is being blown way out of proportion.”

Good News, he said, “supports civil rights for all people, including gays and lesbians.  My understanding is that the Indiana law, like the laws and court decisions in at least 30 other states who have the same legal status, does not sanction discrimination. It simply sets a high bar for courts in determining the balance between religious freedom and competing values in our society.”

The Indiana law differs from the federal  Religious Freedom Restoration Act and most similar state measures in explicitly allowing any for-profit business to assert a right to “the free exercise of religion.” The Indiana law also explicitly makes a business’s “free exercise of religion” a defense against a private lawsuit by another person, rather than simply against actions brought by government.

Religious freedom also deserves protection, Lambrecht noted. “Since religious freedom is one of our bedrock freedoms, I believe it ought to be protected for all people, not just Christians,” he said. “Our society functions best when there is a free and open marketplace of ideas and people have the freedom to live by their convictions to the greatest extent possible.”

Freedom in the public sphere

The Rev. Brent Wright, pastor of Broad Ripple United Methodist Church, Indianapolis, said he thinks the intent of most supporters of the Religious Freedom Restoration Act was to allow people to follow their conscience, but noted there are “appropriate limits” when it comes to freedom in the public sphere and equality for every human being.

For Wright, the real issue is the civil rights of yet another marginalized community in America. “We’re having the same conversations again that we once had about skin color,” he said, but added that, “The fact that we’re going through it now feels hopeful to me even as it feels frustrating.”

Wright, who wrote a letter to Pence asking him to veto the bill, believes the church should lead the way and show the world “the open arms of Christ, to all people, in all circumstances.”

The law has pushed many, he explained, to speak up in a way that no one thought was unnecessary before. “One of the signs of hope these days is the swell of public support for openness,” Wright said.

Mayors and leaders of businesses, civic organizations and educational institutions across the state — including the  presidents of the United Methodist-related University of Evansville, University of Indianapolis and DePauw University —have issued statements of concerns about the Religious Freedom Restoration Act.

“As we continue to build an environment of inclusion at UIndy, I join many other leaders in our state in calling for our Governor and our legislators to do the same for our community of Hoosiers.”

DePauw University President Brian W. Casey said he joined with other state leaders, institutions and corporations in urging “the governor and the legislature to take all steps necessary to address the harm this legislation has caused.  We must affirm that the State of Indiana is a place that welcomes and respects all citizens and visitors regardless of their race, religion, or sexual orientation.”

Bloom is a United Methodist News Service multimedia reporter based in New York. Follow her at https://twitter.com/umcscribe or contact her at (646) 369-3759 or newsdes[email protected]