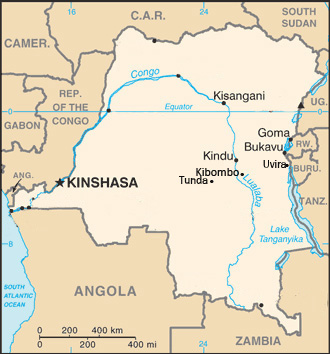 Two white Christians from Nashville, Tennessee, stand out in a crowd in the Democratic Republic of Congo. Mike DuBose, photographer, and myself, Kathy L. Gilbert, news writer, visited the United Methodist East Congo episcopal area – the newest episcopal area in The United Methodist Church – in October. We traveled by car, motorcycle, boat and plane. We traversed over many long kilometers on stretches of road that would be considered impassable in the U.S. (Volcanic rubble is really challenging.)

We learned what it is like to be suddenly alone in a tense situation, such as taking domestic flights in a country where few people speak English and they are not letting you get on the plane. It was also a culture shock when in heavy traffic people just reach out and slap the vehicle next to them to signal they want to move over. We also had police pull over or block our vehicle and we didn’t know why.

We spent the night in 10 different locations, including two overnight boat trips. East Congo Conference Bishop Yemba Gabriel Unda called us “strong” after we made the eight-hour roundtrip foray on motorcycles deep into the forest to visit a pygmy village. But I’m really not. I admit that I’m way too soft and clueless to really know what daily life is like for so many who extended their hospitality to us.

It was challenging but worth every moment. This is the first of those stories and more will follow in January. Mike and I hope you will find it worth the ride, too.

Maman Doris was walking down a familiar dusty road on her way to a nearby market to buy food.

The 60-year-old widow said she has developed “an illness in her uterus and the bleeding has not stopped.” She hides her face as she whispers her story into the ear of a friend, the Rev. Esther Furaha, a United Methodist pastor from Bukavu.

Furaha translates her story and says the woman finally found help when her pastor and friends in her church brought her to Panzi Hospital in Bukavu. The hospital is well-known for taking care of women who survived vicious sexual assault.

“She is a faithful United Methodist,” another friend said when he spots her waiting on a bench outside the admission office. He was horrified to learn of her ordeal. “She is in church every week, singing in the choir.”

Doris (not her real name) is one of east Congo’s raped women. There are thousands.

While rape happens in every country and corner in the world, it is particularly perverse and rabid in eastern Congo.

The United Nations has called the eastern Democratic Republic of Congo the rape capital of the world and the most dangerous place on earth for women. Research reports that 12 percent of the country’s women have been raped at least once and that 48 women are raped every hour.

“Women suffered much during these 20 years of war,” said Bishop Gabriel Yemba Unda, who leads the East Congo Area of The United Methodist Church.

“Many lost their marriages; they are victims of HIV/AIDS.”

Unda hopes the church can build “safe nests” for women who are branded by violent sexual assaults committed by gangs of men in uniforms who have never answered for their crimes. Alfred Zigbuo, a United Methodist Global Ministries missionary in the East Congo Area, is helping with those efforts.

“I want to help bring about some wholeness and healing in their lives,” Zigbuo said.

Unda’s vision is to create centers where these women can be educated and learn skills that will help them become independent wage earners so they can provide for their children. 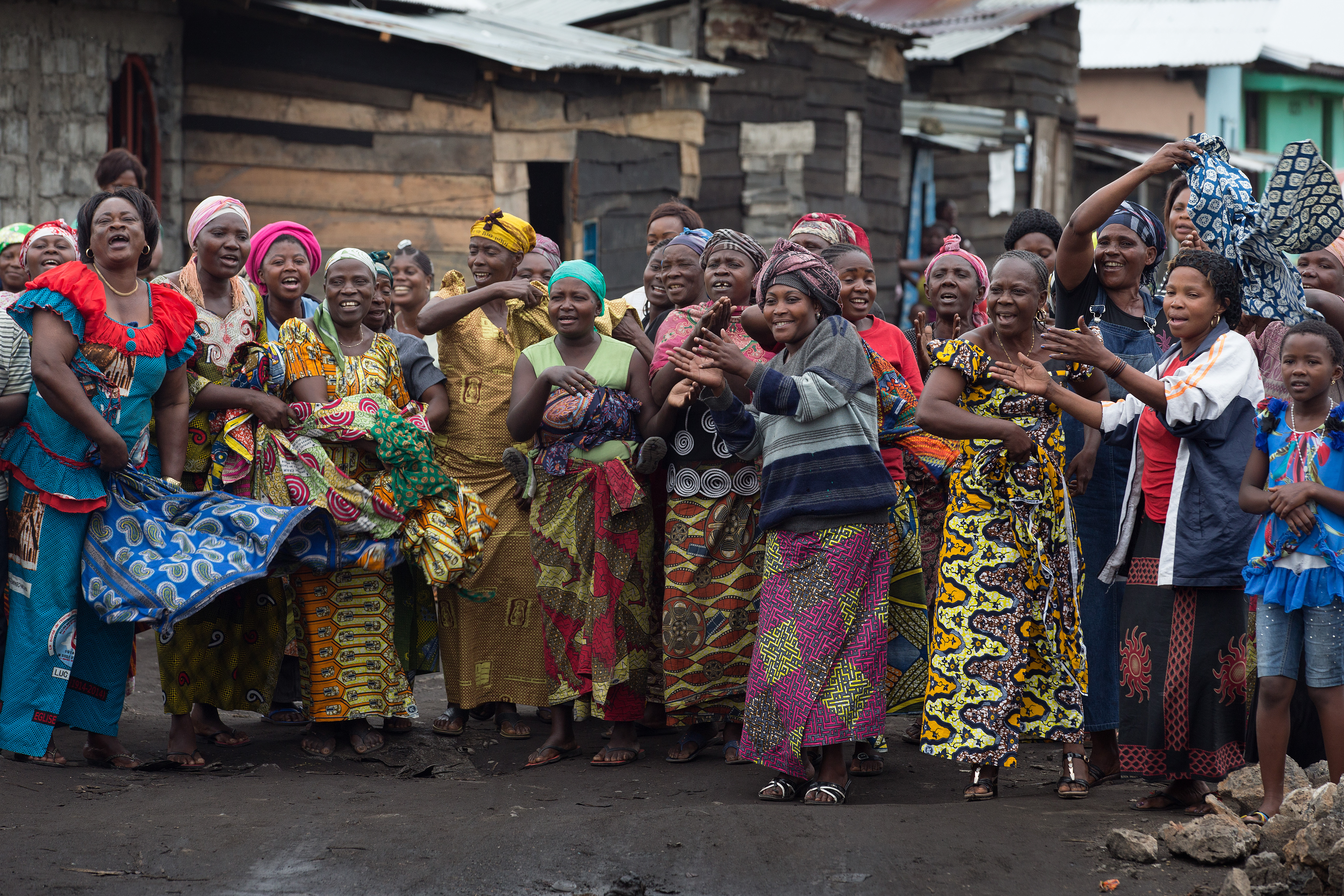 Women of Office United Methodist Church in Goma, Democratic Republic of Congo, welcome visitors to the church which offers ministries to women affected by their country's 20 years of war. Photo by Mike DuBose, UMNS

A place of refuge

Office United Methodist Church in Goma has become one of these centers. Abandoned, raped or widowed women learn to sew and make crafts to sell in the markets. The church also runs an orphanage for children.

On one rainy, overcast day in October, women and children crowd into the small church with a tin roof and a mud floor. Crude log benches line both sides of the church.

Women who have been victims of rape and have no place else to turn pack the left side of the church.

A visit from a media team from the U.S. representing United Methodist Communications, the denomination’s communication agency, provides a rare opportunity for these women to be heard.

Josephine Efulato, who works side by side with Adolphine, speaks some English and volunteered to interpret.

“There are many, many women. Each one is a special case,” Efulato said, carefully trying to measure how much the visitors will want to hear.

Olive, a pretty 18-year-old with a heart-shaped face, tells Josephine what happened to her. As her words are translated, she watches and waits.

“She said she was walking on the road with her younger brother and sister on her way to visit her grandmother and grandfather when they were caught up in the midst of a tribal war.

“They (several men) kept her for about six months before they let her go free. She has no idea what happened to her brother and sister. Her family has abandoned her. She was left pregnant and with ‘the disease’— HIV/AIDs.”

Many of the women with HIV/AIDs are receiving medical aid from Heal Africa, a nearby Christian hospital, and staying with members of the church.

Next to the church, a small building has been converted into a trade school of sorts. Women learn to sew clothing, weave handbags and make intricate art from tiny pieces of wood.

The church does not have the funds to feed and shelter the women, but by teaching them a marketable skill, they are offering a hand up. Inside the small church, they find some comfort from each other.

Anifa, a widow, was going to look for potatoes to feed her children. She was on the road when a gang of 10 men took her.

“They kept me as a wife … passing me around … for two months.”

She has HIV/AIDs, but she is quick to say the 4-year-old sitting in her lap does not. Both have been abandoned by her family.

Agnes was raped five years ago. Her 4-year-old child was a result of that attack.

Marie Rose bears the scars on her face and body from her brutal attack.

“They came in the night to my village. They raped me in front of my husband and then they killed him.” She has HIV/AIDs and lost most of the sight in one eye from a knife wound.

“I believe in Jesus and I hope one day to have a life again.” 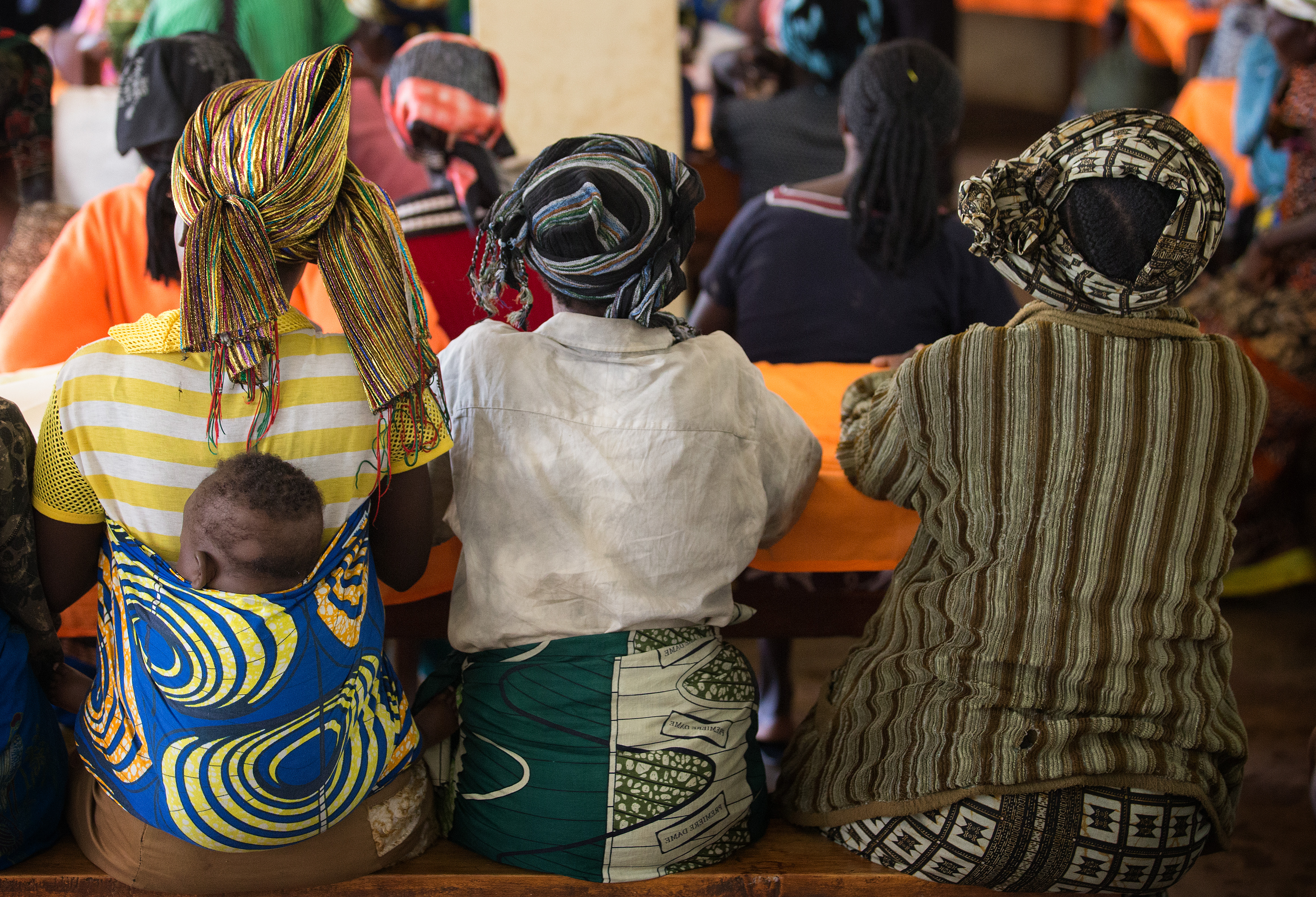 Panzi Hospital in Bukavu, Democratic Republic of Congo, cares for women who are survivors of sexual assault.
Photo by Mike DuBose, UMNS

One of the places where women can find help is Panzi Hospital in Bukavu.

Dr. Denis Mukwege Mukengere founded the center in 1988. The hospital is known worldwide for the treatment of survivors of sexual violence and women with severe gynecological problems.

Kulila Mamy, the admitting nurse at the center, comes to work every day knowing she will hear heartbreaking stories. Teams of doctors including psychologists work together to determine the course of action for each patient, she said.

Mamy said many of the women find their way here through their pastors and friends from churches.

A large group of women sitting under a pavilion are knitting, crocheting and embroidering cloth. Their children play around their feet, sit in their mother’s laps, or strapped to their backs.

One woman who is a member of a United Methodist Church in the region steps forward to talk.

“I am here because my church assisted me. Here they train us how to live out of all our suffering.

“When we want to go to the fields we are attacked by the soldiers. We want to live free, we want to be free. We don’t need war. We are tired of being treated like that. A woman is not created to be used by men,” she said with tears sliding down her face.

Another woman said, “If you are here it is not by my wish but by the wish of God.

“You have shame to explain to people what happened to you. I don’t have anything. That they accept me here is a miracle of God. I am not alone.”