Alfred Degny knows information can make the difference between life and death.

The director of Dabou Methodist Hospital, Degny tells of an elderly man from a nearby village who was suffering an attack of hypertension. Rather than take him to the Dabou hospital, his children took him farther away, to the country’s commercial capital, Abidjan, for treatment. There, he died.

If the man had been taken to Dabou hospital first, he could have been stabilized before going on to Abidjan, and he probably would have survived, Degny says.

“This is the kind of information that radio can help us send across,” he says. He hopes the new United Methodist radio station in Abidjan will help reduce such incidents by broadcasting information about health matters and the hospital’s services.

Many United Methodists in Côte d’Ivoire share similar hopes for the impact of the new 101.6 FM station, known as La Voix De L’Esperance or The Voice of Hope.

Station Director Lydie Acquah sees the station as a tool for combating poverty, providing spiritual formation and coaching, empowering women and youth, and sharing information about health, agriculture and employment. Students at the regional seminary are excited about the station’s potential for evangelization.

As the station’s March 14 dedication approaches, Acquah says she thanks the Lord. “Not for me,” she adds, “but for my church, for the proclamation of the gospel, for the support that we are bringing to people who have lost hope. For me, it’s a great day.”

Led by Côte d’Ivoire Bishop Benjamin Boni, the dedication will draw church members and leaders from around the country and overseas to celebrate The Voice of Hope.

“Good evening, my sister. You are at ‘A Cry in the Night.’ What is your problem?” 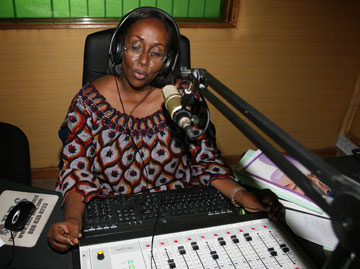 Lydie Acquah, director of 101.6 FM in Abidjan, sees the radio station as a means of combating poverty and empowering people in Côte d’Ivoire.

Yannick Gnaman, the spiritual leader of the national United Methodist student union, is fielding a call from Sally in the Riviera neighborhood of Abidjan.

Sally explains that her brother recently took an important exam and she asks for prayers that the results will be good. Gnaman thanks her for the call, then prays earnestly for God to spread his hand to ensure that Sally’s brother gets his degree and that doors open for him.

Sally is the first of more than a dozen callers that Gnaman helps tonight. His Thursday night show, designed for students, focuses on topics such as being organized with schoolwork, dealing with failure and attending university away from home.

“We take time to pray for students and young people who have problems,” he says. “Most of the time, in the community where they belong, the spiritual leader doesn’t have time to take care of their needs.”

Reaching young people is a priority for Acquah, and “A Cry In the Night” is part of a diverse lineup of programs that also includes “Eden,” a show on marital issues; “Living Environment,” about maintaining a healthy lifestyle; and “God In The Heart of the Army,” providing spiritual support to people in the military.

The station’s programming was based on audience surveys before the station started, and Acquah relies on that and other input from listeners. Understanding people’s concerns, likes and dislikes is important, she says.

Nadege Bossey, a student at the United Methodist seminary of Abadjin-Doume, starts each day listening to the 5 a.m. devotions on The Voice of Hope. She got hooked on the station in January while recovering from surgery. 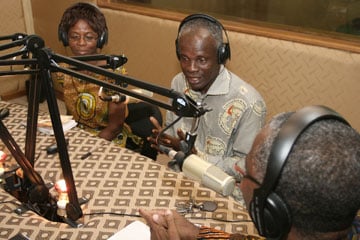 A panel of experts discuss marital issues on one of several talk-show programs airing on La Voix De L'Esperance the Voice of Hope radio station in Abidjan.

She tuned in to “Hello, Pastor,” a call-in show, and heard the host leading listeners in prayer for a woman who, like Bossey, was suffering after surgery and feeling overheated. Kneeling and listening to 101.6 through her cell phone, she felt she was experiencing a divine moment.

“That was wonderful,” she says.

She and fellow students Raphael Kouadio Nogbou and Ismael Kida are fans of “Hello, Pastor.”

“In this country, we don’t have enough pastors … so answering the needs through the radio is very important,” Nogbou says of the show.

The radio station is a powerful tool “that God has entrusted to the Methodist people of Côte d’Ivoire,” Kida says. “We must use it for good purposes, so that through the radio, the entire country will be converted to Jesus Christ for the glory of God.”

At Dabou Methodist Hospital, west of Abidjan, Degny and Dr. Justin Konan Chatigre hope the radio station can help reverse a disturbing pattern: patients waiting until they are extremely sick before seeking help.

“The impact would be positive if our patients had information,” Chatigre says. “It would make our work very easy because what we have noticed is that patients will come at the last stage of their sickness.”

He would tell people how to prevent malaria through using mosquito nets, removing stagnant water, keeping a clean living environment, and teaching children to stay dressed at home and to go to bed early. Information also can help people detect problems such as malaria, the leading cause of death among children, he says.

The station has recorded an initial program on health with support from Degny’s staff.

For Degny, it is important to give a “message of hope, to tell this population who lives in poverty that we don’t need a lot of financial resources to prevent disease. Disease can be prevented through information.”

Fasting for the station

As the dedication approaches, Acquah and her staff have been working long days and nights – and they fasted for a day during each of the past two weeks. They are inviting listeners to attend the event, which will include a celebration after worship at Jubilee United Methodist Church.

Bishop Boni and Côte d’Ivoire church leaders will be joined by partners from the denomination’s Texas Conference, United Methodist Communications and the United Methodist Board of Higher Education and Ministry.

The Voice of Hope has been broadcasting almost continuously since Dec. 24, and Acquah receives supportive calls from listeners and a warm reception from groups. On a February visit to Yopougon to introduce the station, she says, “I saw some Methodists who were crying.”

The station’s signal extends as far as 100 kilometers (62 miles) along the coast and across an area of about 3 million people. Acquah envisions an even broader audience someday.

“I dream of covering the entire country,” she says, “so everyone in the country can listen to the radio.”

*Tanton is on staff at United Methodist Communications. Isaac Broune, communicator for the Côte d’Ivoire Conference, provided interpretation from French to English for the interviews.

Church helps nurse children back to health in Congo

With the support of United Methodist Global Ministries’ Global Health program, more than 1,000 malnourished children are recovering in the Democratic Republic of Congo.
General Church