Editor's note: Bishop Woodie W. White, the first chief executive of the United Methodist Commission on Religion and Race, writes a "birthday letter" each year to the Rev. Martin Luther King Jr. in which the bishop reflects on the progress of racial equality in the United States.

I reflect on race in America on this sunny, wintry day. I do so as the nation prepares to remember your birth date and what you did in your short life to change a nation and influence the world. We now know even better what a remarkable contribution you made and the legacy you left us.

I am especially mindful today of a recent experience shared with me by an African-American friend. Invited to participate in worship - that included an observance of the Sacrament of Holy Communion at a nearby predominantly white congregation - my friend had gladly responded.

It was when he helped distribute the bread and juice that one couple caused the solemnity of the occasion to turn a bit sour. They refused to take the elements from black hands! It was an awkward moment, but my friend moved on to more welcoming hands and faces.

Obviously, the biased couple did not take seriously the words uttered by the pastor only moments earlier: "Ye that do truly and earnestly repent of your sins, and are in love and charity with your neighbors, and intend to lead a new life, following the commandments of God, and walking from henceforth in his holy ways: Draw near with faith, and take this holy Sacrament to your comfort, and make your humble confession to almighty God."

My friend and I put the incident in perspective. It was one couple out of hundreds! Those two individuals should not characterize either white people or the congregation. Yet the sting of racial prejudice, whether coming from hundreds or from a single individual, is a sting nonetheless.

Perhaps that is the difficulty of navigating race in America as an identified racial minority - that is, the unpredictability of encountering racism in day-to-day living. One must always be prepared. It can manifest itself in so many different places and in so many different forms. In a classroom or office, at a department store counter, in a committee meeting or in a casual conversation, even at the Table of the Lord. One simply never knows. 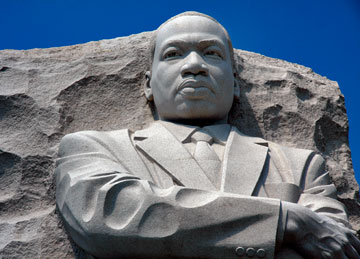 The Martin Luther King Jr. National Memorial in Washington was dedicated by President Obama on Oct. 16, 2011.
A UMNS photo courtesy of Maille Bradfield.

Martin, in 1944 the discussion of race in America was characterized by the famed Swedish social scientist Gunnar Myrdal in his study titled "An American Dilemma." He described the race problem in America as the contradiction between segregation and discrimination on the one hand, and on the other, the American ideal of freedom, equality and justice for all. In 2012, I wonder if race might better be described as America's stubborn virus.

Many years ago, I likened racism to Johnson grass, that tough, elusive type of grass that seems to defy destruction. When it appears to be eradicated, it shows up elsewhere. It can even grow through tiny cracks in cement! One thinks it's gone and then discovers it was only dormant.

That may have been the mistake of those who claimed we were in a "post-racial" era following the election of the first African-American as president of the United States.

Martin, you would undoubtedly be overwhelmed with the progress made in America in the past 40 years. Only those who did not know the pre-Civil Rights America could or would claim the country has not changed. But Martin, it has not changed enough!

I continue to marvel at the general silence about race and the American presidency. While recent studies still conclude that white and black Americans view race differently, I can think of no place where that is more glaringly true than in the assessment of the current presidential administration. Black Americans view the president as having been disrespected, unduly criticized, his accomplishments dismissed and minimized. However, when media pundits make the same observation, they simply ask with wonderment, "Why?" None or few point to an underlying race factor.

When the United States lost its bid to host the 2016 Summer Olympics, some Americans actually cheered because our president had supported the nation's bid! For many black Americans, we are convinced there are those who would rather see the country fail than see the first African-American as president succeed. Martin, in the psyche of many Americans, race trumps all else - patriotism and even theology!

One must be quick, very quick, Martin, to note that even those who would return America to a pre-Civil Rights era are bound to failure. Attempts to politicize race in the 21st century - as it was in the 20th century - will not succeed. Even laws enacted by some state legislatures that are interpreted as measures to "suppress" the vote of black and brown Americans and otherwise disenfranchise these voters will not stand. America and Americans have changed too much for that to happen, however much it may appear otherwise.

Not just political but moral issue 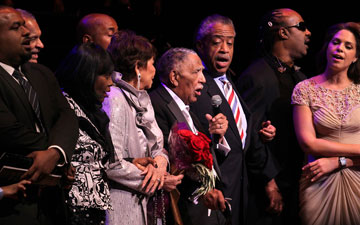 The Rev. Joseph E. Lowery (with microphone) leads the singing of "We Shall Overcome" during his 90th birthday celebration Oct. 9, 2011 at the Atlanta Symphony Hall.
A UMNS photo by Kathleen Barry.

Besides, Martin, you reminded us that racial justice and equality, in the final analysis, are not merely political issues but moral ones! We are not simply working for an America that is fair, but a nation that is morally and ethically just. Racial or religious bigotry has no place in such a nation or society. We are a family not just of nations but the family of God. God's children, all.

Martin, let me close with the words of our beloved colleague, the Rev. Joe Lowery, who recently celebrated his 90th birthday, and is still protesting, and championing the cause of justice, even on a cane! In his book, "Singing the Lord's Song in a Strange Land," Dr. Lowery reminds us all:

Happy Birthday, Martin! We Shall Overcome!

*White is the denomination's Endorsing Agent for Chaplain Ministries and bishop-in-residence at Candler School of Theology. This commentary originally appeared in the United Methodist Reporter.