Expressing their frustration with a “culture of silence,” women of the United Methodist Sierra Leone Annual Conference took to the streets of central Freetown to protest against the growing violence against women and girls in the country.

On July 27, the women, all dressed in black, marched from UMC House — the conference’s head office — to King Memorial United Methodist Church, where members of United Methodist Women were holding their Western District Annual Convention.

Carrying anti-violence and anti-rape placards, the women stopped at strategic locations in the city, prayed and spoke through a public address system mounted on a truck against violence and rape, urging other women and girls to fight against gender-based violence. They appealed to government and law enforcement agencies to legislate and enforce more robust laws to punish those who carry out these crimes. 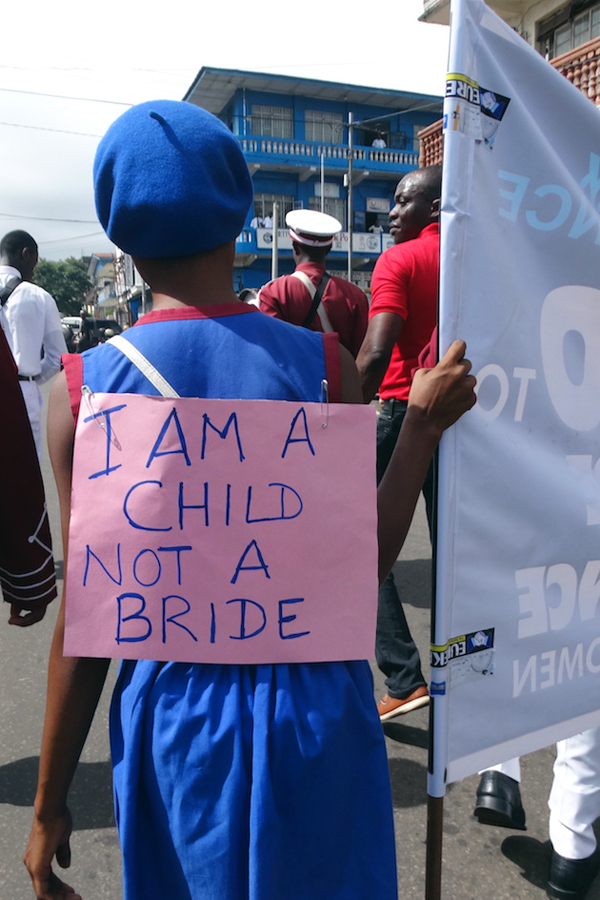 A girl from the United Methodist Girls Secondary School in central Freetown, Sierra Leone, carries a placard on her back saying she is not a bride.

“We are today marching to break the culture of silence against rape and all forms of violence against women and the girl child,” Ethel Sandy, coordinator for United Methodist Women, said shortly before the women took to the streets.

Often, she explained, cases of rape are covered up due to cultural beliefs that it is bad to shame the perpetrators who are usually respected men that command authority in their communities.

“Laws have been put in place and we want the laws to actually act upon these crimes,” Sandy said. “We are tired of long, drawn out rape cases. They need to act and act fast to save our generation.”

She recalled the case of Hannah Bockarie who was brutally raped, tortured and killed in 2015 and regretted the matter has not been concluded up to date. Sandy said United Methodist Women were working with law enforcement agencies and other pressure groups in the country to improve the situation.

She cited a few success stories of their advocacy, including a rape case involving a prominent man in the provinces. “Today he is in prison. He is suffering for what he did.”

One popular opinion that ranked high among the on-looking crowd of men as the women addressed the crowds along the streets was that the advocates must talk to women and girls who dress in miniskirts and other provocative attire.

Elmira Sellu, a regional missionary for United Methodist Women, speaking at King Memorial United Methodist Church, called the idea that such women were inviting rape “nonsense” and retorted, “What can the same men say about the babies in diapers who were raped?”

Edith Rogers, who chaired the opening ceremony of the Western District Annual Convention,  said, “Today, we have made Sierra Leone know that we are fed up with violence against women in our country, which is in line with our conference theme, ‘Go and Tell of All You Have Seen and Heard — Luke 7:22.’”

Musu Kamoh, a representative of the International Rescue Committee, said it was time for action. “Violence against women is one of the least prosecuted crimes and so it has continued,” she declared. “Women and girls suffer most of the consequences of violence. Today, the IRC is very happy for this advocacy taken by the UMC Women. The response to violence must be immediate if we want to stop it.”

Most of the women and girls who are violated are poor, she added, pointing out that the mother whose 4-month-old baby was raped could not raise the sum of about $27 U.S. needed for the test at the Rainbow Center, which handles rape and other violence-related matters against women.

Jusu is director of communications for The United Methodist Church in Sierra Leone. News media contact: Vicki Brown at (615) 742-5470 or [email protected]