Gospel music with a Latin beat and oratory as hot as any salsa can be counted on at meetings of MARCHA, the Hispanic/Latino caucus of The United Methodist Church.

The challenging sermons and speeches are not just allowed. They’re expected.

“One of our main roles is advocacy, so the prophetic word is very important to us,” said Bishop Elías Galván, executive director of MARCHA and a retired bishop.

At this year’s MARCHA meeting, held here Aug. 10-13, the election of President Donald Trump and his get-tough approach to immigration enforcement provided speakers plenty to talk about. But The United Methodist Church itself was a hot topic.

For example, Justo González, a renowned, Cuban-born church historian and theologian, ripped into the pastoral appointments sometimes made to the denomination’s Hispanic/Latino churches. 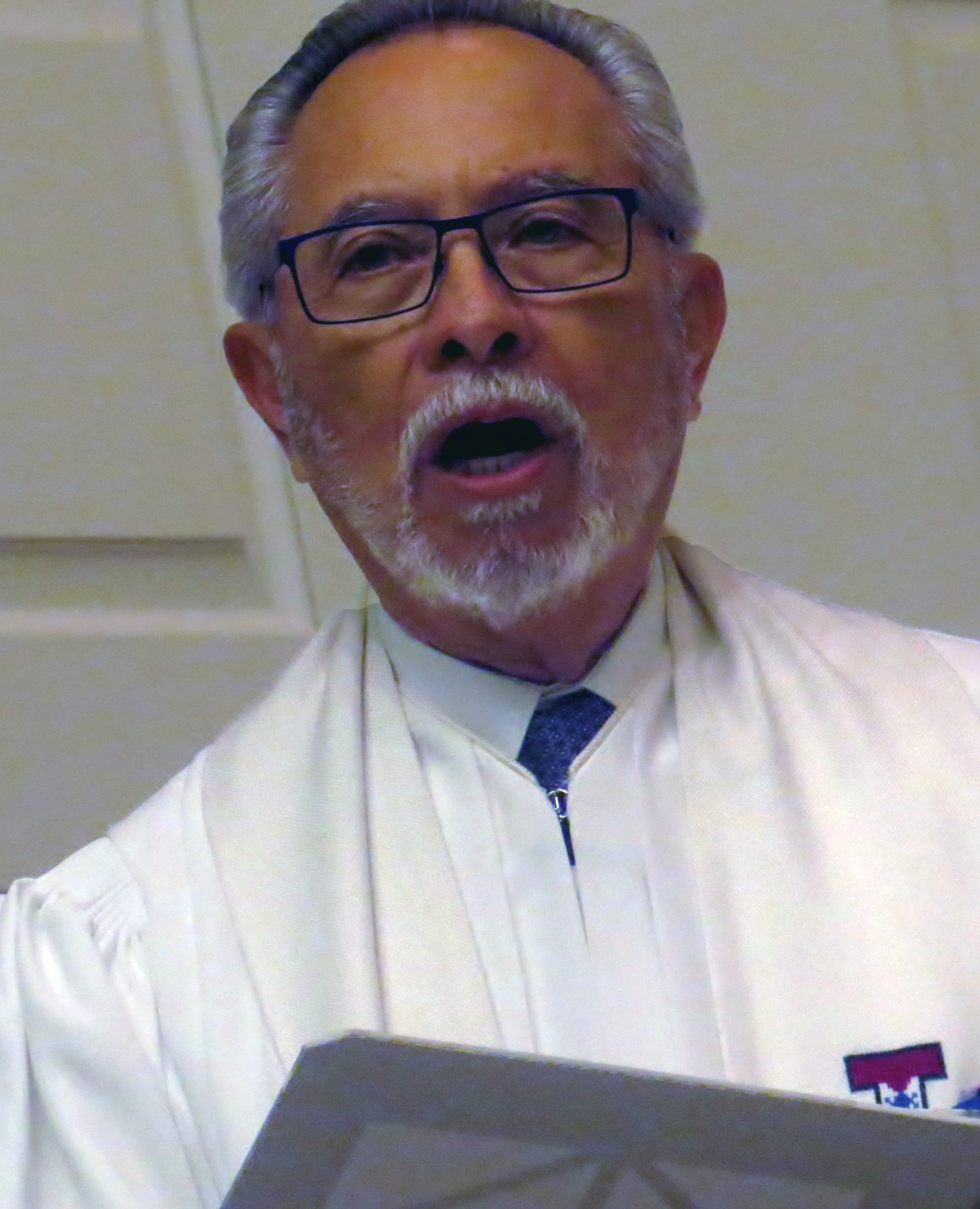 “I find numerous cases … of people who have been assigned the role of pastor simply because they speak Spanish,” he said during a plenary address. “My brothers and sisters, that’s another form of racism. We need trained pastors!”

For the Rev. Irving Cotto, a district superintendent in the Eastern Pennsylvania Conference, a MARCHA meeting is all about letting such impassioned voices have their say.

“Above all, it means finding a space — a safe space — where we can think openly, creatively, about the future of the church in general and those issues that are directly pertaining to the life, the development and the future of the Latino ministry,” he said.

The 46th assembly of MARCHA (Methodists Associated Representing the Cause of Hispanic/Latino Americans), drew some 325 people to a Dallas hotel for meetings and to Perkins School of Theology for opening and closing worship.

Some top executives of church agencies came, as did 10 active and retired bishops.

Chicago Area Bishop Sally Dyck told the assembly that one Hispanic/Latino church in the Northern Illinois Conference has congregants from 10 Spanish-speaking nations.

“In many ways, unity in the midst of diversity is most clearly lived out in some of our Hispanic/Latino communities and churches, and the rest of the church could take notice,” Dyck said.

This MARCHA meeting was notable in that about a fourth of those attending were youth or young adults.

“They bring not only more energy but creative ideas, hope for the future,” Galván said.

MARCHA’s advocacy helped create the plan and the caucus remains its close partner. So celebrating at a MARCHA assembly was fitting, according to the Rev. Hector Burgos. 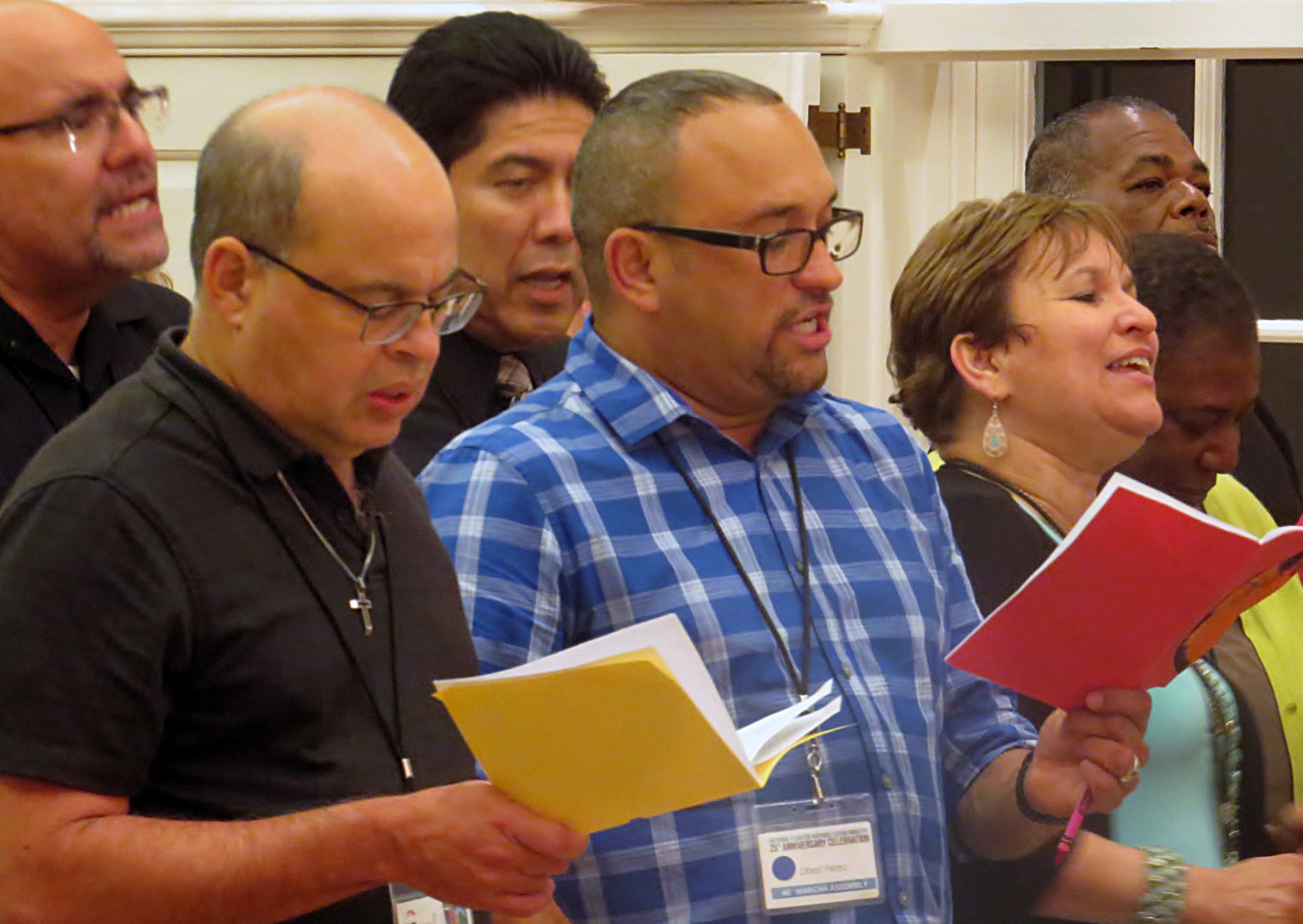 Spirited singing was a part of opening worship during the 46th MARCHA Assembly, held Aug. 10-13, in Dallas. Photo by Sam Hodges, UMNS.

“It is very special because the plan is that God-given instrument to help The United Methodist Church understand and value the contributions of Hispanic/Latino peoples,” said Burgos, MARCHA’s communications coordinator and director of connectional ministries for the Greater New Jersey Conference.

The National Plan also offers a way to continue to learn and strategize how to be in ministry with Hispanic/Latino people, Burgos added.

Education is a part of MARCHA gatherings, and one well-attended session featured demographer Mark Hugo Lopez of the Pew Research Center.

He noted that 25 years ago, Hispanics in the U.S. numbered about 22 million, or 10 percent of the population. Now they’re about 57 million or nearly 20 percent.

The population continues to grow, but more through births in the U.S. than immigration, which has slowed. Other trends include a shift to speaking English, and rapid gains in educational attainment.

As for the Trump factor, Lopez said surveys are showing that Hispanics are now somewhat less optimistic about their prospects in the U.S.

Trump’s rhetoric combined with his promise to build a wall across the U.S.-Mexico border and his early moves to toughen immigration enforcement were a backdrop to the MARCHA discussions.

“The issue is not just the situation in terms of immigration, but (also) racism,” Galván said. “It’s opened the doors to many hostile expressions against all Hispanics, not just the undocumented, not just the refugees. And to other groups, not just Hispanics. It’s something that needs to be denounced.”

And to be understood, said Bishop Minerva Carcaño of the California-Nevada Conference.

Carcaño organized her plenary address around Fareed Zakaria’s “Why Trump Won” documentary for CNN. The bishop laid out the points made by Zakaria, weaving in her own analysis of where the church has failed to recognize and respond to economic and social anxieties.

“We need to consider how we will be the church among and with the poor,” she said. “We need to reconsider our very expensive models of local church ministry and church planting, and how we equip or do not equip persons to share the good news of Jesus Christ.”

But Easterling, who leads the Baltimore-Washington Conference, also challenged United Methodists to self-reflection and new action.

“The question I want to raise is, beyond this day, what do you do? … When was the last time you had somebody who didn’t look like you inside your house eating dinner?”

MARCHA heard from Pablo Alvarado, director of the National Day Laborer Organizing Network, who asked United Methodist churches to extend a protective ministry to street corners where undocumented workers gather. Troy LaRaviere, president of the Chicago Principals and Administrators Association, called the group to be fearlessly honest in self-assessment.

“If you’re committed to fighting injustice as an institution, the first thing you have to do is acknowledge its existence in your own institution,” he said. 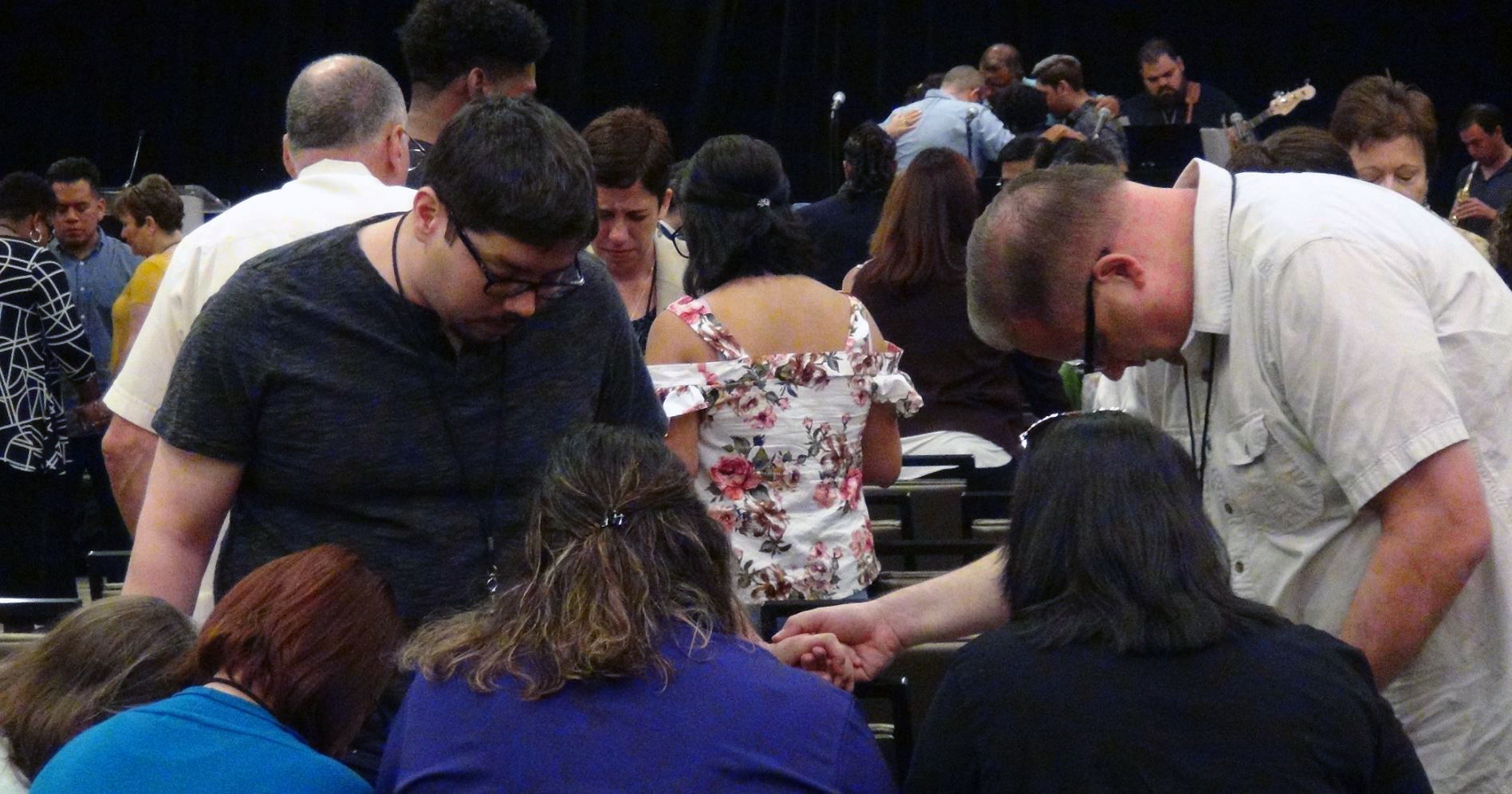 Ivan Gonzalez (l) and the Rev. Alan Felton lead a small group in prayer during the Aug. 10-13 MARCHA assembly in Dallas. Photo by Michelle Maldonado.

Even the celebratory moments could be edgy.

Thomas Kemper, top executive of the United Methodist Board of Global Ministries, praised the work of the National Plan for Hispanic/Latino Ministries. It’s part of the agency he leads. But Kemper also said he felt obliged to make an uncomfortable point.

“Over 50 million people in this country are of Hispanic/Latino descent, and in our church, we only have 1 percent Hispanic/Latino,” he said. “Something is wrong in that picture.”

The Rev. Francisco Cañas, director of the plan, said in an interview that he was glad Kemper spoke out. Cañas noted that the denomination as a whole has steadily declined numerically in the U.S.

“We are a middle-class institution who insists on keeping those values, when John Wesley, the founder of the movement, didn’t do that,” he said. “He went to the streets. He dealt with the poor people.”

MARCHA’s Dallas meeting included workshops on community organizing, sanctuary for undocumented persons and a range of other subjects.

Among the young people present was Leonardo Valle, of Roswell, Georgia. Asked if he’d found the MARCHA gathering meaningful, he had a ready reply: