Throughout the U.S. civil rights movement, Dorothy I. Height often kept to the background and worked tirelessly behind the scenes for racial equality and women's rights.

But now Height's name is front and center on a Washington, D.C., landmark. The U.S. post office near Union Station has been renamed in honor of the longtime United Methodist, who died on April 20, 2010 at the age of 98.

The post office is the first federal building in the district to bear the name of an African-American woman, according to The Associated Press.

Her many United Methodist friends and admirers say such a distinction is a fitting tribute to the woman who was known as "the godmother of the civil rights movement."

"I think she would be very pleased," said friend, the Rev. Mamie Alethia Williams, pastor of John Wesley United Methodist Church in Glen Burnie, Md. "The post office is used every day. It is the kind of place that connects people not only locally but also nationally and globally, and it is no respecter of persons. That represents what she was about."

Height spent 33 years on the national board of the YWCA and more than 40 years at the helm of the National Council of Negro Women.

During the 1960s, as the council's president, Height helped organize voter registration in the South, voter education in the North and scholarship programs for student civil rights workers. She also tackled issues of poverty as her organization supported free school breakfasts for children, promoted community gardens and advocated for improved housing.

She helped organize the women's caucus in the National Council of Churches in the 1970s, and later worked toward empowering black families as the founder of Black Family Reunion Celebration.

"No gathering of national civil rights leaders was complete without her presence."
Bishop Woodie White.

When Dr. Martin Luther King Jr. gave his historic "I Have a Dream" speech in 1963, Height was the only woman, besides Coretta Scott King, invited onto the platform.

When Barack Obama was sworn in as the nation's first African-American president more than 45 years later, she was on the platform once again.

That historic inauguration was not her first encounter with an occupant of the White House.

She was friends with Eleanor Roosevelt and recognized by three U.S. presidents. She received the Presidential Citizenship Medal from Ronald Reagan in 1989, the Presidential Medal of Freedom from Bill Clinton in 1994 and the Congressional Gold Medal from George W. Bush in 2004.

"She played a far more important role in influencing race and social justice in America than many realize," said retired Bishop Woodie White, the first chief executive of the United Methodist Commission on Religion and Race.

She offered advice on policy decisions and held her own in a room full of men, White said, and she did it all with quiet dignity and courage, usually wearing one of her trademark hats.

"No gathering of national civil rights leaders was complete without her presence," the bishop said.

It quite literally takes an act of Congress to name a U.S. post office.

The naming process begins with a U.S. representative proposing the dedication of a post office building. Members of Congress have an informal agreement that a state's entire delegation (Democrats and Republicans alike) will co-sponsor the dedication. A post office dedication bill must pass the House and Senate before the President signs it into law. 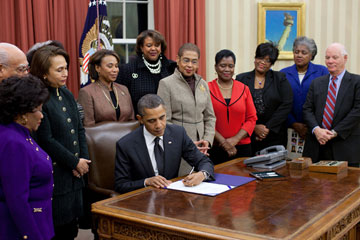 Of the 31,871 post office buildings in the United States, only 599 bear the names of an individual.

Delegate Eleanor Holmes Norton (D-D.C.) shepherded the bill to honor Height through Congress. As the District of Columbia's sole congressional representative, Norton cannot vote on the U.S. House floor, but she can vote on procedural matters and in House committees. She also can introduce legislation.

President Barack Obama signed H.R. 6118 naming the post office for Height on Dec. 15, 2010. A plaque with her name now hangs in her post office.

"My colleagues in the House and Senate may argue about closing the government down or raising the debt limit, but both sides of the aisle knew better than to delay a bill to name a federal building in Washington, D.C., for Dr. Dorothy I. Height," Norton said at the dedication on Feb. 22.

The congresswoman said Height was "a mentor to millions because she accommodated no division in the human family."

A woman of faith

Her Christian faith helped shape her commitment to breaking down divisions between races, between genders and between denominations.

"I find through meditation and prayer that there are very few things that I do not find some way to deal with," Height told United Methodist Communications in 2005.

She stuck with the denomination even as it struggled to end segregation and welcome women leaders.

"She saw the potential of the church," her friend Williams said. "She saw The United Methodist Church speaking for women and children oftentimes more loudly, more clearly and more demonstrably in the broader community. That vision was a part of her vision."

"I think we can learn from her that when we have faith in God and faith in ourselves, we can achieve a great deal and overcome insurmountable odds."