Editor's note: On July 10, David Nevotti, a member of the First United Methodist Church in Sugar Land, Texas, and Illya Onoprienko, a member of the student ministry of the University of L'viv, were fatally injured while helping to repair a church-related facility in L'viv, Ukraine. The Rev. David Goran, a United Methodist missionary serving in L'viv as a student ministry director, was seriously injured and has been transferred to a hospital in Munich. United Methodist Communications producer Jan Snider, who stayed with the Gorans in February 2010 while she worked on stories about their mission, reflects on what she saw.

I first experienced the passion of the "pilgrims" two years ago.

In the heart of L'viv in Ukraine is a university, and around the corner a few blocks is the United Methodist student center. It was at that center I witnessed the work of David and Shannon Goran, as they shepherded a growing student ministry.

The students came up with the name "pilgrims" because they felt that they were beginning an adventure and clearing a new path for themselves in post-Soviet Ukraine. They gathered for Thursday evening worship every week at the student center, and it was at one of those gatherings that the name was suggested. "Pilgrims" stuck.

L'viv hugs the Polish border. It is a richly storied city that received the attentions of nearly every Eastern European power, dancing a reluctant waltz with the Austria-Hungary Empire, the Polish Proletariat and, most recently, the Soviets. The urban fabric is woven with elaborate Viennese-inspired architecture and dotted with simple blocked buildings of later Soviet influence. The Orange Revolution was born in the 1990s in L'viv as a push-back against Russian influence in a newly independent Ukraine.

Farther away from the Russian eastern border than the capital city of Kiev, L'viv quietly clung to its Christian roots during Communist rule. But, the formality of the Ukrainian Orthodox Church was often experienced through passive participation of established rituals.

David Goran explained to me that the goal was not to replace the religious identity of the students but to affirm a "real and living faith." Still, Ukrainian society as a whole continues to look upon Protestant ministries with suspicion.

The Gorans understood some of these challenges when they accepted the role as missionaries in 2009. They were stepping into a ministry started earlier by United Methodist missionaries Stacy and Fred Vanderwerf.

Shannon Goran was familiar with the ministry because she served as a mission intern with the Vanderwerfs in 2003. It was after she returned to the United States that she met David Goran while attending Asbury Theological Seminary in Wilmore, Ky. After they married, the opportunity to take over the ministry was presented to them. David Goran committed to being a missionary in Ukraine without ever having set foot in the country. Although he didn't know it at the time he, too, was a "pilgrim." 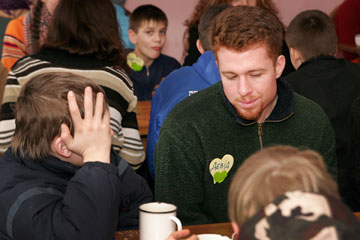 The Rev. David Goran visits an orphanage outside L'viv, Ukraine, in this 2010 file photo.

The formal name of the student ministry is called Molod' do Isusa, which means "Youth to Jesus." David Goran likens the ministry to a Ukrainian version of a Wesley Center. It is established near campus to be a place of refuge and a community rooted in Jesus.

The center was on the top floor of a centuries-old building. Several times a day, the students went up and down the curved, slanted and creaking stairs passing the Soviet-style apartments carved out of the building. At the top floor, they were greeted with backpacks and shoes strewn across the worn wooden entry, and they reached for a pair of slippers from the communal pile. Nearly always, the next stop was the small kitchen, where they would pour hot tea, often into cups provided by the Sugar Land (Texas) United Methodist Church.

At the time, it didn't seem all that unusual to me, but I came to realize that this experience is what made these students "pilgrims." It was a sense of shalom and community and with it came a new realization that shalom happens when God's love is acted out.

It was unusual in this culture for a church leader to talk with the students about their faith, their aspirations, and to challenge them to think beyond rote teachings and more toward societal outreach. The students loved it. Shannon Goran explained to me that it was the long-term goal to develop the students into leaders of the ministry, from a Ukrainian perspective, under Ukrainian leadership. "Indigenous leadership would be so much better than having two people from the U.S. running things. We want to put ourselves out of a job."

As she explained this to me, I could hear raucous laughter next door. Peeking in I noticed that after the men's meeting, the ping-pong table was pulled to the middle of the room. The loser of the match, David Goran explained, became the target of the "red dot" game. This meant the winner of the match launched a ping-pong ball, full speed toward the offered back of the loser. David Goran laughed and said the guys came up with the game on their own. He noted that the game seemed to build the kind of camaraderie that was the ultimate goal.

The Gorans believe in ministry outside the walls of the church and while this Wesylan tenant is key to United Methodism, it was an entirely new idea to the students. Whether it was venturing outside the city to spend a day at an orphanage or experiencing the hospitality of the Gorans as they opened their home to share a meal and Bible study, the approach was growing the ministry. The "pilgrims" were experiencing what it was like to blaze a trail. 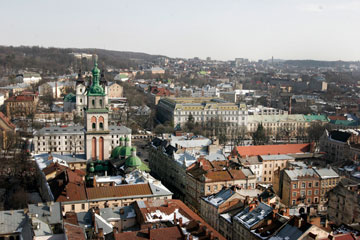 The skyline of L'viv, Ukraine, shows the area near the roof collapse. L'viv will celebrate its 756th anniversary this September.

But the students weren't the only ones to forge ahead into new territory. The Gorans, themselves, were moving outside their comfort zone. In a new country and a strange culture, they were leading and forming future leaders of the church. They were experiencing the barriers to innovation that exist in Eastern Europe: red tape, Byzantine bureaucracy and a suspicion of the motives - and even the character - of Western Protestants.

In the middle of making relationships, doing church and extending Christ's love to the greater community, the Gorans found themselves to have become good, old-fashioned, situationally challenged, United Methodist missionaries - and in this way, they found themselves fighting the battles and taking on the responsibilities of foreign mission just as if they had been in a forgotten corner of Africa. In living into Christ's calling for them, the Gorans found that they, too, were "pilgrims."

Now that a terrible tragedy has occurred the Gorans are in mourning for two brave brothers who gave everything in their service to Christ. Now comes the question, where do the "pilgrims" go from here? It is not clear whether the Gorans will return to Ukraine, or when. For the students, will indigenous leadership emerge? Have the seeds of ministry been given sufficient time to take hold? For the Gorans, they will have the additional layer of grief added to their burden. Thankfully, they have a worldwide church to support and pray for them - but that is not to say that it will be easy, or that their pilgrimage has not led to heartbreak.

Even though we know better, people like me often think about the mission field as just another ministry. But this incident reminds us that Christian missionaries put a lot on the line to follow their calling: their years on earth, access to their families back home, their dreams, their hearts, and even their lives. I can't think of any reason someone would do that - except that they love God, they love God's vision, and they love and want to serve God's children.

Pilgrims believe in this model of giving, one that started with a single Hebrew peasant and 12 pilgrim recruits, and has trailblazed forward ever since. It continues today, and into tomorrow. I pray for God's love to surround the families, friends and churches of the lost brothers, and the two young pilgrims who set out years ago for Ukraine to do God's work. I pray for healing; for meaning, for hope and for renewal. Because the world is still out there, God's work remains to be done, and there is no place for the pilgrim to lay his head.

*Snider is a producer for United Methodist Communications.

The drafters of the Christmas Covenant are leading webinars in the Philippines, Africa and Europe about their proposal for changing the denomination’s global structure.
Evangelism