In response to growing popularity of "The Hunger Games" and the upcoming release of the book's corresponding movie, the Rev. Andy Langford and his daughter, the Rev. Ann Duncan, have written a study for pastors and church members called "The Gospel According to The Hunger Games Trilogy."

Duncan, pastor of Hoyle Memorial United Methodist Church, first became interested in "The Hunger Games" after her husband, a high school history teacher, told her how popular the series is among his students.

Duncan, a former youth pastor, saw it as an opportunity to engage teens.

"I knew that if teenagers were reading it, if I were still a youth minister, I would try to engage them and see if there were Christian parallels," she explained.

Duncan read the first book around Thanksgiving 2011 and then suggested to Langford, pastor of Central United Methodist in Concord, that there might be some religious themes. The two read the rest of the series and started discussing it during Christmas vacation. They then determined the best format for the books would be online, since the movie release was only a couple of months away.

"The Gospel According to the Hunger Games Trilogy" is available on Amazon Kindle and includes character analyses, a comparison of (main character) Katniss Everdeen and biblical figures, analyses of themes and discussion questions to help students consider deeper meanings.

The Hunger Games, written by Suzanne Collins, takes place in post-apocalyptic North America and centers around the community's methods for coping with limited resources and an evil government through an annual fight for survival known as "The Hunger Games". For the characters, the book sets up a fight on three levels: to survive the oppressive government, to survive the game and to stay true to their beliefs.

Duncan said she and Langford recognize that the series is not religious. 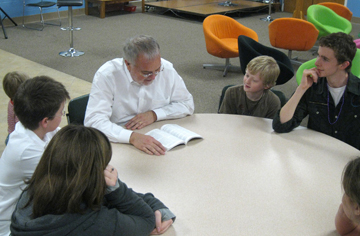 The Rev. Andy Langford, pastor of Concord Central United Methodist Church in Concord, N.C., discusses "The Gospel According to the Hunger Games" in his Sunday school class. Langford said people in the class tend to be pleasantly surprised by the ideas he presents about Christian parallels in The Hunger Games. Photo courtesy of Andy Langford.

"We're not trying to make it something that it's not, but we're trying to find themes that we as Christians can relate to," she said.

The authors said they wrote the study to help teachers, pastors and churchgoers relate the books to biblical ideas in a way that is engaging and helpful for facilitating discussion among youth.

"I think we were trying to say to our audience - principally pastors and teachers: 'Let's be attentive to what the younger generations are reading,'" Langford said. "We find some motifs, some characters that become teaching moments."

"The way [the main character] wins is by being willing to sacrifice herself," he said. "Isn't that what Jesus did? So, we talk about agape love.

"We make the argument that the young generation is looking for a hero," he added. "I remind them Jesus was just 30 years old."

Likewise, Langford and Duncan said the movie, which opens in theaters March 23, creates a chance for religious leaders to take advantage of teachable moments found in contemporary culture.

Duncan said it could be beneficial to use pop culture "to emphasize what we as Christians believe, to talk about violence, hunger, poverty. We can talk about what is our Christian response to those. The books end hopeful; we end the guide saying the Christian message is hopeful."

'We have to start where they are'

Langford, who is teaching his "Hunger Games" study to a Sunday school class at his church, said adults can complain about teens reading these books, but he thinks the series serves as a positive way to influence youth by engaging their interests.

Advance ticket sales for "The Hunger Games" movie are currently available online or in many theaters.

Langford's church, located in one of the movie's main filming locations, is considering giving tickets to the youth, filling a theater and then having a brief discussion afterward.

Though Duncan's church doesn't have a major event planned, she said her town - another one of the main filming locations - has been buzzing with events related to the movie, including book giveaways, a 5K run and "survival classes."

Duncan suggested that pastors consider reading the study to see if they could use it or "The Hunger Games" movie as an outreach opportunity.

The church might want to show the movie when it comes out on DVD, she suggested. "Use it on a Sunday night and have a discussion."