Jay Cooper already had a wife, two children and a job at his father-in-law’s business when he felt God urging him toward ordained ministry.

“Everything was going swimmingly well until God decided to issue the call,” Cooper recalled.

He wondered how he could afford to pursue his vocation. His former pastor, the Rev. Karl K. Stegall, assured him: “Don’t worry about a thing.”

The Rev. Jay Cooper, a Stegall scholarship recipient, and his wife Susan, in the sanctuary of First United Methodist Church in Bay Minette, Ala., where Cooper serves as senior pastor. Photo courtesy of the Stegall Seminary Scholarship Endowment Foundation.

Now serving as senior pastor of First United Methodist Church in Bay Minette, Alabama, the Rev. Cooper credits a program founded by Stegall for providing the critical financial resources to keep his family afloat while he completed seminary.

Currently, there are 47 full-time Stegall scholars receiving a minimum of $10,000 per year. Stegall scholarships are disbursed in quarterly checks sent directly to the students to use as needed.

For Cooper, attending seminary meant commuting between his home in Alabama and his classes in Atlanta. Gas, wear and tear on his vehicle, and meals on the road were hidden costs that added to the financial strain.

“On those long, dark nights — when I was bogged down with classwork, my wife was in graduate school, the kids were sick and I was worried about how I was going to pay my bills — inevitably, the Stegall check would arrive,” Cooper said.

“I think the Holy Spirit worked through all that. He knew when I needed it.”

The problem of seminary debt

The average cost of seminary is $45,000 to $55,000 per year in tuition, books, fees and living expenses, said Allyson Collinsworth, executive director of Loans and Scholarships for the United Methodist Board of Higher Education and Ministry.

Seminary students can cobble together a variety of scholarships and grants to help offset the costs. However, the vast majority of Masters of Divinity graduates still will have to repay an average of more than $66,000 in student loans, according to a 2014 Board of Higher Education and Ministry study.

That’s virtually impossible on a median base salary of $38,000, plus housing allowance or a parsonage. Such a compensation package would accommodate a “critical debt load” of no more than $35,500, say board researchers.

Stegall conceived of the need for the program following his 1980 appointment as superintendent of Alabama-West Florida’s Troy District. 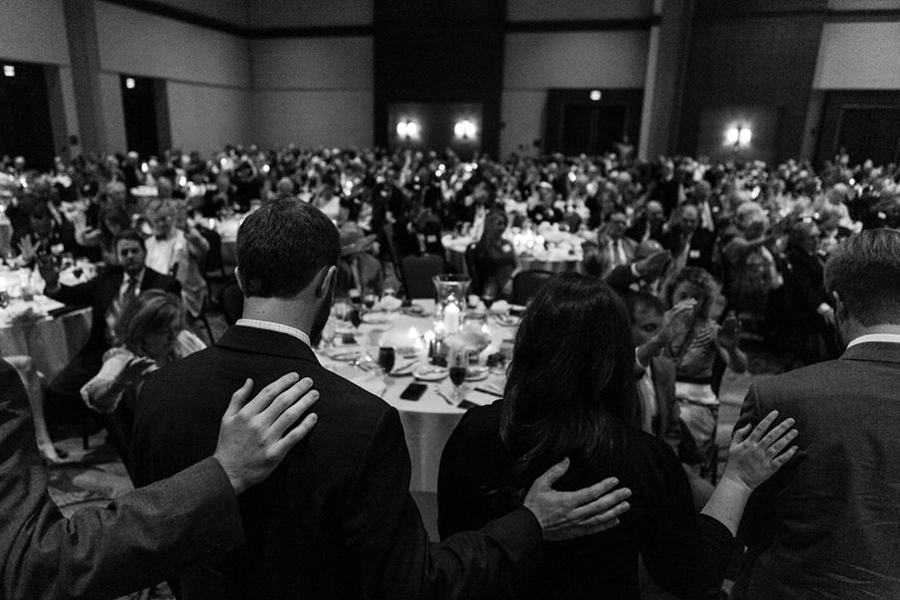 Seminary students receive a blessing from those in attendance at the 2016 Dinner of Celebration in Montgomery, Ala., as they prepare to depart to their respective seminaries. Photo by Luke Lucas, Alabama-West Florida Conference, courtesy of the Stegall Seminary Scholarship Endowment Foundation.

“I saw one heartbreaking experience after another with the seminary students and their families,” Stegall said. “The vast majority of their problems came as a result of the financial strain that they were experiencing.

“I got down on my knees and said, ‘Lord, if I ever get back into a local church, I promise you that I will volunteer the rest of my life to raising money for seminary students,’” Stegall said.

How a foundation grew

Three years later, Stegall was appointed as senior minister of First United Methodist in Montgomery, Alabama. He led a program pairing church families with 35 seminary students to provide not only $1,000 annual scholarships but also long-term friendships and emotional support such as lunch dates, letters and phone calls.

When Stegall retired from the congregation in 2007, the church’s grassroots effort formed the basis of his namesake foundation, which sought to raise $5 million to serve seminary students throughout the Alabama-West Florida Conference. That goal has since been surpassed, and the Foundation’s board has set a new goal of $10 million, Stegall said.

Gifts take many forms: $5,000 from an annual local church cheeseball sale; $61,000 from a small-membership church that had to be closed; $20,000 from a regular donor who was in bed when he received God’s instruction to give it to a student whose family was facing a dire financial emergency.

Stegall, 79, travels extensively to mentor and visit scholarship recipients. He and his wife, Brenda, donate their time to the foundation, so overhead costs are just 2 percent for travel, a part-time secretary, printing costs and the like. That means that the lion’s share of donations goes straight to the students. “Each time we receive a bequest or large gift, we raise the amounts that we distribute to each of our students,” he said.

Micah Wright and his wife, Kristen, are Stegall scholars attending Emory’s Candler School of Theology and are on track to become ordained elders.

“Because of this foundation, it was like watching the puzzle pieces fall together,” Micah Wright said. “It is because of the scholarships that the financial situation of two full-time students is not a burden and we are able to enjoy married life with all of the adventures it brings.”

Simmons is a writer in Stockton, Alabama.