Many, if not most, sermons fade from memory by Sunday lunch, but people in Dallas still talk about one the Rev. William Holmes gave there 50 years ago, just after the assassination of President John F. Kennedy.

While he didn't blame Dallas for the crime itself, Holmes unflinchingly described the city as an incubator for political extremism and incivility, the kind of place where many worried an assassination might occur.

The sermon made the CBS News anchored by Walter Cronkite and brought the young Methodist pastor death threats, forcing him and his family to go into hiding under police protection.

In short, all hell broke loose because of the tough love Holmes preached in Dallas two days after Kennedy's killing there.

Holmes is 84 now, retired in Maryland after a long, accomplished ministry career. He's hard of hearing, and walks with a cane; but he's written books in recent years, and for the 50th anniversary of the JKF assassination he updated an 8,000-word memoir of the sermon controversy that he wrote for his grandchildren.

"It's always been an important memory for me," he said.

Others, such as historian Stephen Fagin, call what happened with Holmes one of the more emotional and compelling subplots of the frenzied assassination aftermath.

"Dallas was blamed by many after the assassination for being a toxic environment, and Rev. Holmes really hit on that in his sermon," said Fagin, associate curator of Dallas' Sixth Floor Museum, which commemorates the JFK assassination story. "The fact that it achieved international notoriety &ellipsis is something Holmes clearly didn't ask for."

On Nov. 22, 1963, Holmes and his wife, Nancy, had joined the crowd at the Dallas Trade Mart, awaiting a luncheon with President Kennedy and the First Lady, Jacqueline Kennedy.

At age 34, Holmes had a Master of Divinity from Perkins School of Theology at Dallas' Southern Methodist University and had done post-graduate work at Union Seminary in New York, where he studied with Reinhold Niebuhr and Paul Tillich.

After a stint as associate pastor at Highland Park Methodist Church, he was appointed in 1957 as pastor of Northaven Methodist, a small, two-year-old church in the north Dallas suburbs — one that would prove open to his progressive ideas on theology and social concerns. 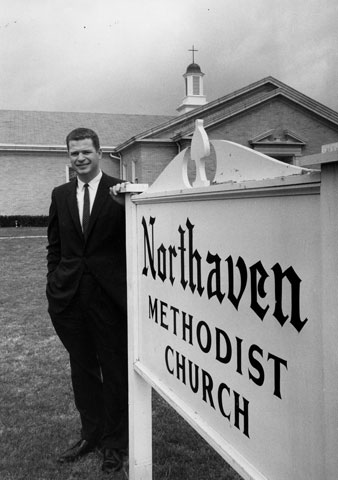 The Rev. William Holmes served as pastor of Dallas' Northaven Methodist from 1957 to 1965, and it was there he preached the sermon "One Thing Worse Than This." Photo courtesy Northaven United Methodist Church.

At the Trade Mart, the Holmes' joyful expectation turned to shock when they learned Kennedy had been shot as his motorcade passed through downtown Dallas. Driving home, they heard by radio bulletin that Kennedy had died at Parkland Hospital.

That same afternoon Holmes began working on the sermon he would give on Sunday, Nov. 24, at Northaven. He got a call from a friend at the National Council of Churches, who said he hoped the Dallas clergy would respond to the assassination with more than "pious platitudes and sentimental phrases."

Holmes offered neither when he stepped to the pulpit at Northaven.

In his 14-minute sermon, titled "One Thing Worse Than This," he argued that Dallas couldn't wash its hands, Pontius Pilate-like, of the tragedy that had occurred in its midst. Good people of Dallas had for too long, he said, stood by silently, giving free reign to political extremists.

Holmes reminded his congregation that in 1960, Vice Presidential nominee Lyndon Johnson and his wife, Lady Bird Johnson, had been harassed, even spat on, by protesters during a visit to Dallas. He noted that United Nations Ambassador Adlai Stevenson had been heckled and hit by a protester's sign during a recent trip there. He mentioned the full-page advertisement attacking Kennedy that had run in the Dallas Morning News the day of the presidential visit.

The indictment culminated with Holmes describing how children in a fourth-grade classroom in North Dallas had cheered the news of Kennedy's assassination.

"In the name of God, what kind of city have we become?" he said.

Holmes devoted the balance of the sermon to challenging Dallas residents to stand up to extremists, on the right and left, and create a more wholesome atmosphere for politics and governing.

"If Dallas rises from this monstrous moment in her history, a new city where different political opinions and the people who hold them are respected, then John Kennedy will not have died in vain," Holmes said. "But that remains to be seen. Until then, the one thing worse than this assassination in our midst, is that we, the citizens of Dallas, should wash our hands and say, 'We take no responsibility for this man's death.'"

Holmes was hardly the only Dallas preacher to hold up a mirror to the city that Sunday. Given that he was a young pastor in a small church, his sermon might well have had no life beyond his congregation.

But CBS television had aired a post-assassination report featuring Dallas officials who offered an upbeat, Chamber of Commerce assessment of the city. The network got complaints that the report was a whitewash and went looking for a balancing view from within Dallas.

On Tuesday evening, the network broadcast included Holmes reading a lengthy portion of the sermon, including the part about the cheering schoolchildren.

The Holmes' phone immediately began to ring from callers supportive or hostile. Holmes agreed to go that night to KRLD, the CBS affiliate, where the local school superintendent demanded to know his source for the account of the cheering schoolchildren.

When Holmes refused to share the name of the teacher in his congregation who had told him — citing concerns for her safety and pastoral confidentiality — the superintendent went on the air to declare the report unreliable.

Meanwhile, police had received death threats against Holmes and found them credible enough to insist that he and his family go into hiding. Holmes and his wife, with their two young sons, accepted a police escort to the home of friends.

Bridwell Library at Perkins School of Theology, part of Southern Methodist University in Dallas, has sermons and other materials related to the JFK assassination. The library has recently put online sermons by the late Rabbi Levi A. Olan, who taught at Perkins and was known as the "conscience of Dallas." He gave a memorable radio sermon on the first anniversary of the assassination.

SMU has offered a number of programs on the assassination, and a course on the subject is taught there.

The Rev. Eric Folkerth of Northaven United Methodist Church in Dallas has blogged about the assassination and written a song about Dallas in that period.

Read the Rev. Holmes' sermon, "One Thing Worse Than This," preached Nov. 24, 1963, at Northaven Methodist Church in Dallas.

Highland Park United Methodist in Dallas had a Nov. 7 program recalling the assassination and its aftermath.

Holmes was living out his description of the political environment in Dallas.

The New York Times covered the death threats against Holmes and noted other reports of local children cheering at news of the assassination. Meanwhile, Holmes received strong backing from most in his congregation, as well as public statements of support from the Perkins faculty and "The Dirty Dozen," a study group of young, somewhat rebellious Methodist pastors to which he belonged.

Hundreds of letters, hostile or supportive, arrived and are now collected at the Sixth Floor Museum. Encouraging notes came from Tillich as well as from Hugh Brannun, a Methodist minister's son better known as "Mr. Green Jeans" on the popular children's network TV program "Captain Kangaroo."

Holmes recalls sleeping little in the first days after the broadcast, given the disruption and tension. But there were humorous moments.

During his stay at a friend's house, Holmes was visited by Harvey and Schubert Ogden of the Perkins faculty. As they were talking, Harvey saw through the window that Bishop W.C. Martin was approaching the front door. Harvey sounded an alert, and Holmes began frantically extinguishing the pipe he was smoking, since Methodists officially disapproved of tobacco use.

In his memoir, Holmes wrote, "I jumped up to stash my smoking materials in another room, when I heard Schubert exclaim, 'There goes our fearless prophet!'"

Holmes added that Martin could no doubt smell the pipe smoke, but overlooked it and provided steadfast support.

The Holmes family soon would come out of hiding, and Holmes credits his wife — usually cautious on every matter regarding family health and safety — with insisting he preach at Northaven the following Sunday.

"She had utter clarity about the importance of not allowing Dallas to drive me from my pulpit," Holmes said in a 2007 oral history interview with Fagin. "She put that clarity above all of her anxieties and usual precautions."

Police were present, and the service went without incident.

Holmes would stay at Northaven through 1965, eventually assuming the high-profile pulpit of Metropolitan Memorial United Methodist Church in Washington, D.C. He was there for 24 years, preaching to a congregation that included members of Congress and the U.S. Supreme Court.

But the Dallas controversy stayed with him — and with others. One witness to that is the Rev. Chris Holmes, his son and a United Methodist pastor in the Baltimore-Washington Annual (regional) Conference.

"I work across our denomination and do a lot of training," Chris Holmes said. "Every year I meet pastors that know my Dad and would go out of their way to hear him preach and know about what happened in Dallas."

Northaven continues to have a reputation for progressive/liberal theology and politics. The pastor now, the Rev. Eric Folkerth, credits Holmes and the sermon controversy with fixing the church's course.

"It is one of the events that turned, if you will, the ship of this church," said Folkerth, who has recorded his own song about Dallas during the JFK assassination. "People who didn't like that left and people who were supportive stayed."

In 2008, Holmes was invited to speak at the Sixth Floor Museum, and there he finally disclosed who told him about the cheering schoolchildren. Carol Tagg —a member of his Northaven congregation —was suffering from Alzheimer's, but Holmes got permission from her family to name her and the school where she taught music and heard the cheering children.

Mrs. Tagg died in 2010. In a recent phone interview, Eric Tagg, her son, declared Holmes' account to be "all true." He added that while he wasn't in his mother's classroom, he was friends with children who were, and they verified the cheering.

Holmes said he plans nothing special for the anniversaries of the assassination or his sermon, other than to be with family.

As for the sermon's long-term effect on him, he assessed that in the conclusion of his memoir. He noted that he had gone on to preach about a range of controversial subjects, including the CIA, homosexuality, abortion, gun control and affirmative action.

"Undoubtedly, there were other times I chose to be passive, and sided with the status quo — even when I knew a prophetic word was needed," he wrote.

"But in such moments, for all my rationalizations, I have never been entirely able to shut out the radical reminder of my ordination: `Take authority as an elder in the Church to preach the Word of God.' Against this awesome privilege and its imperative, and ever conscious of `Dallas memories,' which remain as fresh with me as the day they happened, I have struggled throughout my ministry with what it means to cry, `Thus saith the Lord.'"