The Rev. Scott Carnes wants to see how authentically he can share his life and faith through online media.

For the 32-year-old associate pastor at First United Methodist Church in Pontiac, Ill., electronic communications, if used properly, present a "new frontier" that can foster personal relationships, promote connectionalism and, ultimately, contribute to the denominational goal of "making disciples of Jesus Christ."

"If we don't start communicating more effectively as a church, the message gets lost on every level," he said.

He is not the only pastor promoting these tools. In Florida, the Rev. Jack Kale, pastor of Gulf Breeze United Methodist Church, launched a private social network for his church members. At Morning Star Church in O'Fallon, Mo., the Rev. Mike Schreiner invites churchgoers to text him questions during his sermons.

The United Methodist Church has a number of social networking tools. At the recent 2012 United Methodist General Conference, a blog sponsored by United Methodist News Service and the MethoBlog, www.gc2012conversations.com, drew more than 450,000 page views over a two-week period.

Carnes' own journey this year, including two major surgeries, has attracted a number of online followers. Over the last couple of months, he said, he has received almost 10,000 hits to the "Scott & Carrie's Musings" blog that he shares with his wife, the Rev. Carrie Carnes. Some posts have 400 "likes," he noted, "which means I'm preaching online to more people than I am on Sunday mornings."

Carnes used his "Virtues of Scripture" blog to invite "a number of friends, scholars, pastors, lay people, and even some bishops to share devotions about resurrection and eternal life" between Easter Day and Pentecost on May 27.

The idea to create a devotional blog series focusing on Eastertide - the 50 days between Easter and Pentecost - occurred while he was recovering from his first surgery.

While Lent receives top billing on the Christian faith as a time of inward reflection and preparation for Easter, the follow-up response "of uplifting joy and (reflection on) what it means to be a resurrection people" often is limited to Easter Day, he pointed out.

Reclaiming time to reflect on Easter and the resurrection "brings continuity as we approach Pentecost, which is the new life of the church."

The two blogs are often interchangeable because for Scott and the Rev. Carrie Carnes, both clergy members of the United Methodist Illinois Great Rivers Annual (regional) Conference, the personal is public. That, he believes, is how you build relationships.

"The possibilities are endless for us because we're already a connectional church."
-The Rev. Scott Carnes

The couple, who married in August 2010, met in Evanston, Ill. while attending seminary at Garrett-Evangelical Theological Seminary. Scott Carnes just finished eight years as a board member of the United Methodist Commission on Christian Unity and Interreligious Concerns. Carrie Carnes, who officially graduated from Garrett this May, has been serving as the pastor at Chenoa (Ill.) United Methodist Church since last summer.

Scott Carnes' recent journey as a medical patient began after his mother underwent surgery so a tumor of the ear that had grown into her brain could be removed. Because Carnes had similar symptoms and an underlying genetic component was possible, he decided to see a doctor.

The eventual diagnosis, found "completely by chance" after an MRI in early December, was of a tumor in his cerebellum. He chose to seek treatment at Barnes-Jewish Hospital in St. Louis, a location that offered both excellent neurological care and the support of his wife's family, who live there.

Carnes said his district superintendent advised him to keep in touch with the congregation about his medical situation, and Twitter, he decided, was the best way to communicate.

He explained to church members that they didn't have to be active on Twitter themselves to follow tweets about his progress and soon learned the digital divide is not as wide among older and younger church members as often is presumed.

A retired legal secretary in her 70s bookmarked his Twitter page. Now, he noted, she also tracks the bishop online and will come up to Carnes and say, "Scott, you haven't tweeted all week. Where have you been?" 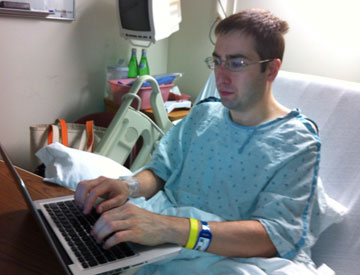 Throughout his hospitalization and recoveries from two major surgeries, Carnes stayed connected with his congregation and others via social media, especially Twitter and Facebook.

The Feb. 6 surgery was successful, but a bout or two with the flu prolonged his recuperation. After he finally returned to work for a few days, he began to suffer migraines and vomiting. Although those can be part of the recovery, the symptoms were severe enough to send him to the emergency room in Pontiac on April 14.

Carnes was sent by ambulance to St. Louis, where he underwent surgery April 17 to repair a spinal fluid leak. "It was basically the same surgery, but they didn't go into the brain," he explained. "They redid the closing of the last surgery."

In a post that day on the Virtues of Scripture blog, Carrie Carnes described how the couple sang "Lord Who Throughout These Forty Days," a hymn about Jesus' time in the desert during Lent, when they felt alone in the wilderness of his illness. "The hymn reminds us that when we are in barren places - Christ is with us," she wrote.

"The past couple of days have reminded me that Easter is not just about the thrill of an empty tomb and new dresses," she continued. "While God is creating new life all around us, that life isn't easy. It's still filled with pain and challenges, disappointments and starting over. And some days that sucks. But, just as we are assured that Christ is with us in our Lenten wilderness moments so too does that angel at the tomb assure us that the risen Christ has gone ahead of us."

In the end, the complication that sent Carnes back to surgery did not affect his overall recovery, and he feels "back to normal in many ways." Another change awaits the couple on July 1, when he starts a new appointment as a pastor at First United Methodist Church, located on the campus of Illinois State University in Normal.

Carnes said he will continue to push the social media message but understands it can be hard, at first, to relate it to traditional ministry. "So many of the pastors I've worked with, especially older pastors, they look at Facebook or Twitter as something they don't understand and don't want to know."

Part of the problem, he believes, is that many churches and pastors are doing it wrong, using Facebook pages or tweets merely as bulletin boards rather than tools to form relationships and connect with others in the denomination.

"We (United Methodists) could gain so much more from social media than so many other churches could," Carnes said. "The possibilities are endless for us because we're already a connectional church."