Feed my sheep, Jesus commanded. OK, but I’ll do it with it tacos, the Rev. Liliana Padilla decided.

Anyone who comes gets free breakfast tacos — or, if they prefer, oatmeal or pancakes. They stick around for a devotional message, Bible study and prayer.

Padilla preaches at the regular Sunday 11 a.m. service, but cooks for the 9:30 a.m. Taco Service.

And when Padilla cooks, the people say “Amen.” 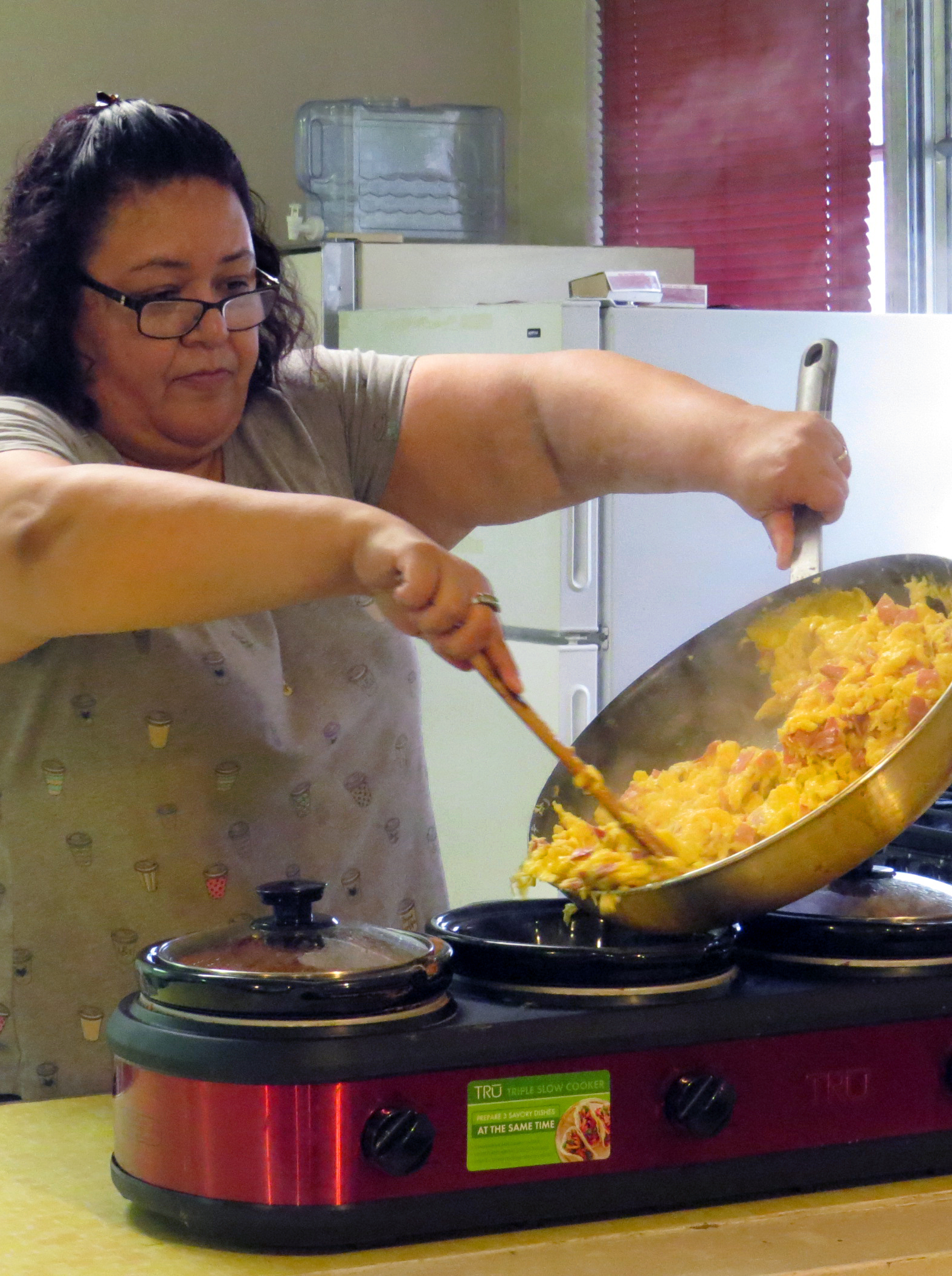 Up early on Sunday mornings, the Rev. Liliana Padilla cooks breakfast for the 9:30 a.m. Taco Service at San Pablo United Methodist Church, in Pearsall, Texas. She preaches at the 11 a.m. service. Photo by Sam Hodges, UMNS.

With food prep beginning in the early morning, and cleanup extending well into the afternoon, it’s a long day. Padilla doesn’t mind.

“In the morning, I start praying, ‘Please, Lord, give me strength.’ And I don’t feel tired. I feel happy,” Padilla said.

Padilla, 45, was appointed to San Pablo last summer. She lives across the street in the parsonage with her husband, Miguel, a pastoral intern at San Antonio’s Saint Paul United Methodist Church, and teenage sons Marcos and Isai.

San Pablo is a historic but small church in a predominately Hispanic part of Pearsall, about an hour from San Antonio. The previous pastor served part time, but Padilla has a full-time appointment.

Since she came, attendance is up at the church’s regular service.

“We’re growing. … She’s out in the community,” said Trevino, a Methodist Healthcare Ministries of South Texas nurse who works out of San Pablo.

Along with her church work, Padilla goes each week to Pearsall’s South Texas Detention Complex to visit some of those held there by U.S. Immigration and Customs Enforcement.

She has made known her willingness to do so through social media, and gets requests from families who can’t travel to the detention center. United Methodist churches also have asked her to counsel detainees they know about.

For Padilla, a Mexico native who had her own long, complicated journey to U.S. citizenship, it’s a labor of love.

“I understand what they feel,” she said.

Fellow clergy admire her commitment, also seen in her recent push to have local Hispanic United Methodist churches coordinate and support one another with vacation Bible school.

Padilla’s experiment in tortilla evangelism began after she noted that Pearsall residents flocked to local restaurants offering three tacos for $2.99. 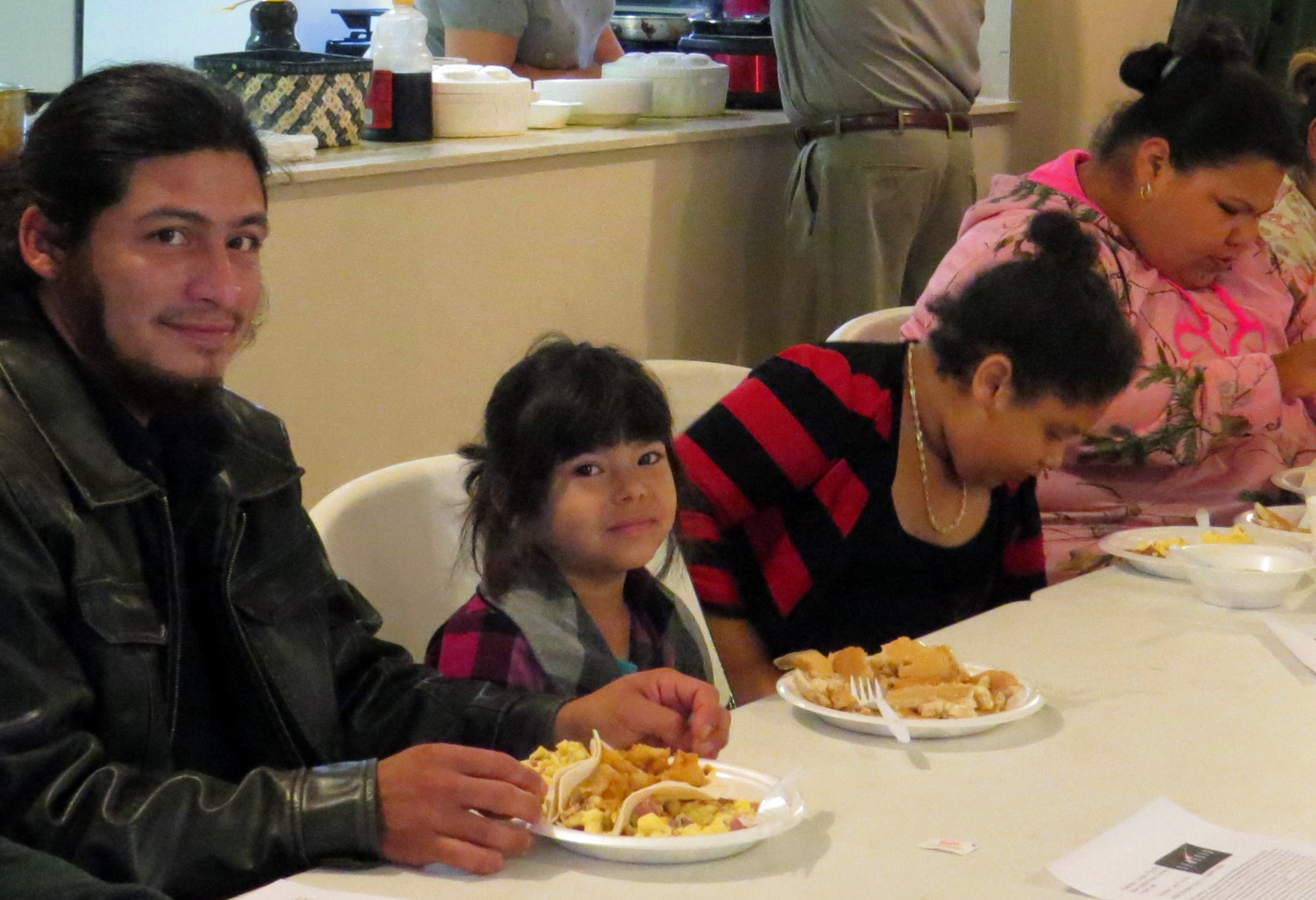 Tacos are the main attraction at San Pablo United Methodist Church’s Taco Service, but pancakes and oatmeal are offered as well. The Pearsall, Texas, church is led by the Rev. Liliana Padilla, who cooks for the Taco Service. Photo by Sam Hodges, UMNS.

Free tacos, she surmised, would pull in some who wouldn’t otherwise come to church. She decided not only to have a Taco Service, but also to have it in English, complementing the Spanish-language 11 a.m. service.

A handful of people came the first Sunday. Thanks to a little advertising and word-of-mouth testimonials to Padilla’s cooking, attendance now ranges from 30 to 40. Padilla worked with a local grocery to make sure attendees go home with a loaf of donated bread.

For leadership of the Taco Service’s Bible study, Padilla relies on church member Mark Castillo. He was eager to share from his many years of poring over Scripture.

“She interviewed me and said, ʽYou sound like you know what you’re doing,’ ” he recalled. “I haven’t had any complaints.”

For the devotional, Padilla — known locally as “La Pastora” — turned to church council president Eulalio Trevino. He has a way with stories and gentle humor.

“It’s giving spiritual food and nutritional food, every kind of food,” he said of the Taco Service.

Miguel Padilla acknowledges that he had concerns about whether his wife could cook for the Taco Service and still have energy to preach well at the 11 a.m. service. He’s become a Taco Service fan.

“It’s worked both ways, to reach new people but also to grow in discipleship the leaders of the church,” he said.

The Taco Service is in San Pablo’s kitchen-equipped community hall. Padilla begins getting ready about 8 a.m. She uses both flour and corn tortillas and a variety of fillings — scrambled eggs, potatoes, ham, beans.

She’s a bit of a whirling dervish, whipping up pancakes and oatmeal even as she’s making tacos. She somehow finds time to chat with those coming through the line, such as repeat visitor Enriqueta Peña.

Peña summarized why she comes to Padilla’s Taco Service:

“She’s a great cook. … I want to learn more about Jesus.”