Many United Methodist clergy gave Pentecost Sunday sermons on the scourge of racism, prompted by the latest high-profile killing of a black man in police custody.

The Rev. R. DeAndre Johnson may have outpreached and outreached them all by offering his own protest hymn, titled “It Is Enough!”

Clad in jacket, dress shirt and slacks, hands held out prayerfully, Johnson stood before a video camera, closed his eyes and sang, “There are no words that can contain, the depth of sorrow, grief and pain, that mothers, sons and all exclaim: Kyrie eleison!”

The video of Johnson singing that and the rest of “It Is Enough!” for online worship at Christ United Methodist Church, in Sugar Land, Texas, had about 19,000 Facebook views as of June 2. Facebook shares of the performance number in the hundreds.

At least eight other churches across the U.S., from Maine to Hawaii, offered their own performances of the hymn on May 31, after Johnson and United Methodist Discipleship Ministries posted the words and music online last week. 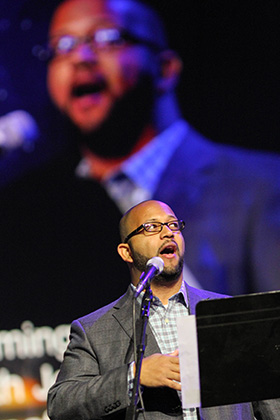 “I continue to be overwhelmed by how this has resonated with so many,” said Johnson, pastor of music and worship life at Christ Church.

Johnson, 37, is a graduate of Centenary College, a United Methodist school in Shreveport, Louisiana. He earned a master of sacred music degree at Southern Methodist University’s Perkins School of Theology.

An ordained deacon, Johnson is perhaps best known in United Methodist circles as coordinator of music — leader of the band — for the 2016 General Conference.

Less than two months after that event, on July 5, 2016, a black man named Alton Sterling was shot dead by two white police officers in Baton Rouge, Louisiana. The next day, Philando Castile, an African American, was fatally shot by a Hispanic officer in Falcon Heights, Minnesota.

After watching video of the aftermath of that latter killing, Johnson couldn’t sleep. The first lines of what would be “It Is Enough!” came to him as he lay in bed, and he rose and found his iPad.

“I typed out that first stanza, then I thought, ‘What more do I have to say?’” he recalled. “That’s when the rest of it came.”

The text echoes a passage in 1 Kings, chapter 19, where Elijah has fled Jezebel and finally cries out, “It is enough.” The different stanzas of Johnson’s hymn elaborate on racial injustice, each ending with either “Kyrie eleison” (Lord, have mercy) or “Christe eleison” (Christ, have mercy).

Johnson said the phenomenon of civilian videos of police brutality against African Americans was part of what moved him to write.

“There’s outrage over just the loss of life, period, but the larger narrative is that it is making public something that has always been a part of the black American experience,” he said. “Suddenly, there was evidence beyond our anecdotes that helps others to be able to say, ‘Oh, I guess there is something to what you’ve been saying.’”

Johnson shared his hymn text over Facebook in 2016 but did not then compose music for it.

When the Ahmaud Arbery killing became a major news story in early May, Johnson posted the text again. He also, at his wife’s and others’ urging, sat down at the piano and in a few minutes wrote music for it — a simple, haunting, minor key melody.

Only after the George Floyd killing in Minneapolis did Johnson, on May 27, post on Facebook the music and the text. He added a verse, drawn from the specifics of Floyd’s death:

“It is enough! We cannot breathe! Will you stand there and watch us bleed? Are you not moved by cries and pleas? Christe eleison!” 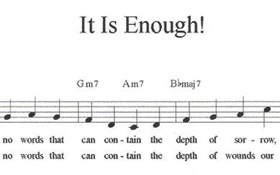 Image courtesy of Discipleship Ministries
See the words and music of “It Is Enough!” by the Rev. R. DeAndre Johnson. Click here to view full image in new window; click cursor on image to enlarge.

The Rev. Cynthia Wilson of Discipleship Ministries quickly contacted Johnson and got permission to add the hymn to the agency’s website.

Between that and Johnson’s own Facebook post, inquiries began to come in for permission to perform the piece on Pentecost Sunday.

Johnson’s own church had its lineup set for worship, but the senior pastor, the Rev. Chappell Temple, made a Saturday night decision to add Johnson’s hymn.

“I thought if other people are going to use it, he should certainly sing it in his own church,” Temple said.

Johnson had never sung completely through the piece before performing it on camera, accompanied by Beth McConnell on piano and GT Mangum on guitar.

But the Facebook raves and shares began immediately and haven’t let up.

“This right here. This right here,” posted the Rev. Maria Dixon Hall, an SMU professor and United Methodist deacon in Dallas, in sharing the video. “My brother DeAndre Johnson using his prophetic gift through the art of music … IT IS ENOUGH!”

Paula Moore watched her church, Kailua United Methodist Church in Kailua, Hawaii, do its own online rendition of Johnson’s hymn.

“His piece is a powerful gift,” she said by email.

In Morgantown, West Virginia, Natalie Shaffer played the piano and Juwan Johnson sang the words for “It Is Enough!” as part of Avery United Methodist Church’s joint online worship service with the city’s First Presbyterian Church.

Shaffer, who also teaches at West Virginia University, said the two churches’ Facebook pages have had more than 1,300 views of the performance.

“Members of both congregations, other professors from WVU, friends and family, and people I have never met have left comments or sent messages of support,” she said.

DeAndre Johnson acknowledges that he’s still coming to terms with the response to “It Is Enough!”

He thinks of himself more as an arranger than as a composer but will be glad if his hymn can have a long life as a change agent.

“I do hope that whoever might be bold enough to sing it, that it would inspire some deep reflection, some honest dialogue and some sincere action.”

A group of leaders from the Methodist Church of Mexico and The United Methodist Church traveled to southern Mexico in April to meet with groups working with immigrants crossing into the country.
Worship