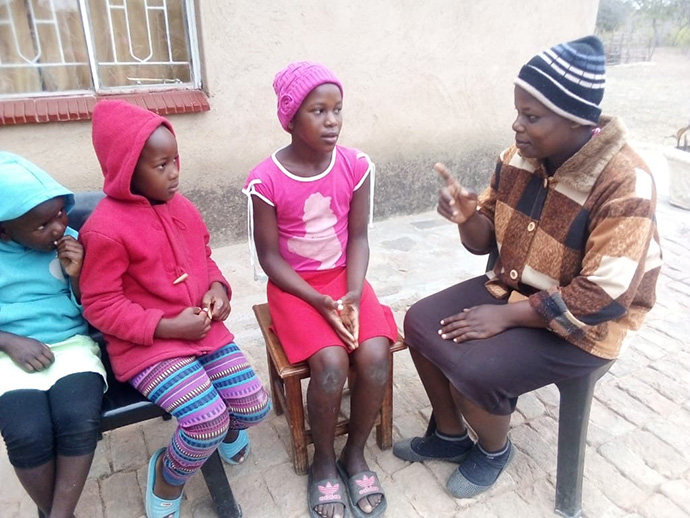 Perpetual Makadzange talks to her three children, (from left) 6-year-old Tizzelyn, 7-year-old Tanatswa and 12-year-old Tsepang, at their home in the Zimunya, Zimbabwe. The United Methodist schools that the children attend remain closed to stop the spread of the coronavirus. Photo by Kudzai Chingwe, UM News.

The COVID-19 pandemic continues to create upheaval in the lives of schoolchildren, especially girls in impoverished areas where food and other resources are scarce.

At The United Methodist Church’s Chapanduka Secondary School in Zimbabwe’s Marange District, six girls between the ages of 14 and 17 have married since schools shut down on March 24, according to school officials.

Some were forced to elope while others got married after becoming pregnant, said Nyasha Mbofana, acting headmaster at the school.

Mbofana said that Chapanduka Secondary School has faced numerous challenges during this COVID-19 pandemic, but it is the girls who have been affected most.

“Lack of continuous and expert guidance and counseling resulted in early marriages. Many have fallen prey to rapists and abusers who are often relatives,” Mbofana said.

Shyleen Dune, 17, a student at Chapanduka, said her “heart is bleeding” as she thinks of schoolmates who have eloped in the months since lockdown. “Their bright future has been destroyed … and their dreams shattered into smithereens.” 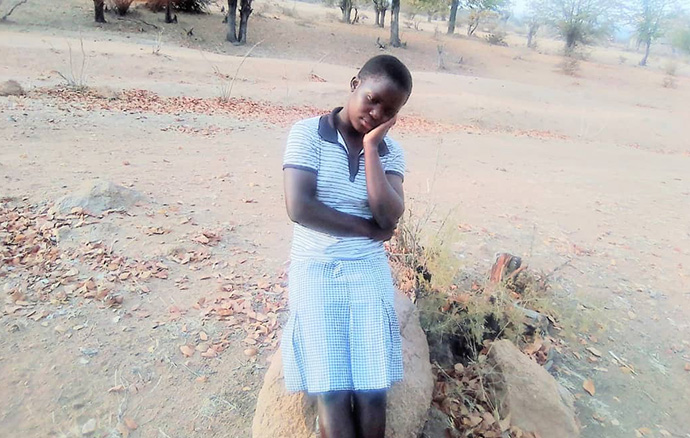 Shyleen Dune, a student at United Methodist Chapanduka Secondary School in Zimbabwe’s Marange District, said she is worried about her future as schools remain closed due to COVID-19. Six girls from her school have gotten married since the national lockdown began in March. Photo by Kudzai Chingwe, UM News.

Dune said most of her classmates don’t have textbooks and can’t afford online learning. Many can’t even afford to put food on the table.

“Hunger is threatening our lives due to loss of livelihoods and poor harvest from the past drought season. All these have compromised the good morals taught at school and at church,” she said.

Of the girls from her school who married during the lockdown, Dune said some had the blessing of their parents, but she said others didn’t and were simply choosing between starvation and marriage.

According to the United Nations’ World Food Programme, by the end of 2020, the number of food-insecure people in Zimbabwe is expected to jump to 8.6 million, a nearly 50 percent increase.

“We are very unfortunate as a school to have witnessed these early child marriages among girls, and substance abuse and gambling among boys as they seek to pass time and earn a few dollars for food,” Dukwende said.

He said teachers and parents try to give good advice but that good moral teachings have “been vandalized by COVID-19.”

While he is disappointed at the marriages, he acknowledged that hunger forced some parents to accept the situation, which he added is difficult to repair.

“Life has no replays and no rewinds,” Dukwende said.

He said the proximity of the school to Chiadzwa Diamond Field complicates matters, since “naïve and gullible young girls” see miners flashing hard-earned currency. The diamond fielders are less than 7 miles, a walkable distance, from the school.

“Parents are sending them to go and sell various wares. While it is a noble idea to involve everyone in working and supplementing income for the family, the girl child is exposed to various other temptations … (and) early marriages,” Dukwende said.

Girls would have been better protected if schools were open, he said.

The Zimbabwe Episcopal Area has 14 primary schools, 12 secondary schools and 12 high schools. The church is awaiting guidelines from the government on reopening, but no dates have been set yet.

The lockdown also has created challenges for boys, too.

“Without much guidance, children are rendered vulnerable and get into substance abuse or early sexual activities that lead to early marriages,” he said.

“As parents, we are crying seeing our children getting married. When you give birth, you expect children to achieve the best, but COVID-19 has contributed to our ruin.

“We pray for early school opening as our last hope,” she said.

Makonya said she keeps a watchful eye over her 16-year-old daughter, Brenda.

“Where she is, is where I am. We go to fetch water and to buy groceries at shops together,” said Makonya.

Brenda said she can’t wait for school to resume.

“Being at school makes us feel safe. … It is worrisome how our parents have lost resources (to pay) our examination fees. Some sold cattle and goats, and how shameful it is to forgo everything and get married.

“I pray to God to give me wisdom and protection against all ills. My mother does not allow me to go anywhere. She said if it is hunger, let us die at home rather than going to (the diamond field).”

Tsepang Makadzange, a 12-year-old student at Mutambara Central Primary School in the Chimanimani Chipinge District, also is ready to return to class. 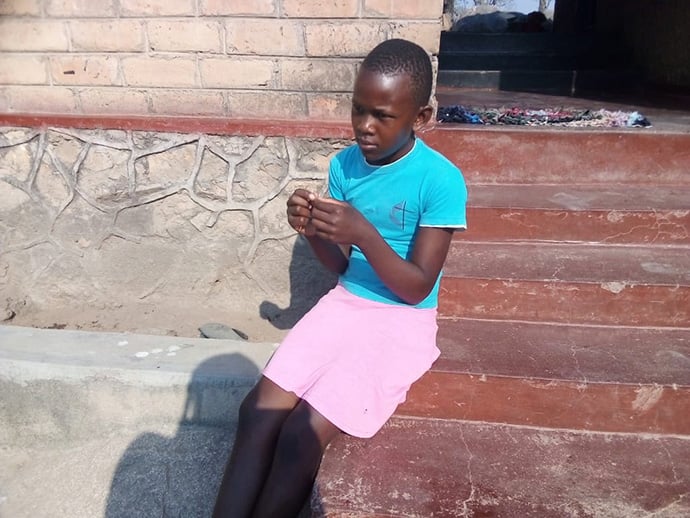 Tsepang Makadzange, 12, hopes to return to school soon. She attends United Methodist Mutambara Central Primary School in Chimanimani, Zimbabwe. “At school, we are occupied and protected, but COVID-19 has destroyed all this,” she said. Photo by Kudzai Chingwe, UM News.

“My wish is for us to go back to school rather than hearing all sort of heartbreaking stories, which are demoralizing. It makes me cry always. At school, we are occupied and protected, but COVID-19 has destroyed all this,” Tsepang said.

“COVID-19 has destroyed our lives and education. We are spending most of our time playing social soccer and netball or other games, which are not productive. …  I wonder what type of generation would come out after COVID-19,” she said.

The Rev. Crispen Musuruware, pastor-in-charge at Hilltop United Methodist Church in the Mutare District, said the situation is takings its toll on students with special needs. Deaf children have been cut off from communication because most online lessons do not use sign language, and in-person instruction is hampered by face masks.

“Students are frustrated and are idle at home due to communication barriers. People who understand their language are now taking advantage of the desperate situation. (They) offer them pet things and end up abusing them,” he said.

The Rev. Munyaradzi Timire, Zimbabwe East Conference education secretary, said COVID-19 has destroyed the futures of too many students.

“Many children are regretting some of the bad choices that they have made, but it is water under the bridge (and they are unable) to reverse (their decisions),” Timire said.

But Dukwende said he has seen some bright spots, notably students who have formed study groups and some who are working with mentors to study online.

However, he noted that network problems and the cost of data often discourage students, especially the most vulnerable. The church’s Murewa High School has successfully run trials for an e-learning portal, which is expected to spread to other United Methodist schools.

Dune said it is her hope that all students in Zimbabwe will have access to distance learning soon.

“If our parents, government or school could provide access to universal virtually or electronic learning for everyone, we would achieve our dreams. As for now, we have left our future in God’s hands.”

Ask The UMC responds to misinformation being spread about the policies of The United Methodist Church regarding human sexuality and whether they have changed or will soon be changed.
Social Concerns

United Methodists receive and share Jesus' promise of abundant life even and especially in the face and aftermath of death.
Young People

Instead of relying on a pastor to oversee its young adult ministry, First Korean United Methodist Church in Wheeling, Illinois, entrusted it to a devoted and committed volunteer layperson with a calling and vision.