Orphans of Ebola and HIV as well as other disadvantaged children in four United Methodist primary schools in Sierra Leone are benefiting from Norwegian scholarships that provide fees and learning materials.

The scholarships, delivered through the Sierra Leone Conference’s Community Empowerment for Livelihood and Development, support primary education for disadvantaged children. The four schools — in remote parts of the West African country — are unlikely to capture the attention of government and philanthropist groups.

“We are particularly interested in children orphaned by Ebola, HIV (and those) whose parents suffer from extreme poverty to an extent that they cannot take care of their children’s educational needs,” said Louisa Kamanda, project coordinator for the community empowerment program. Other categories include vulnerable children of single parents, with a priority on girls.

The $14,000 pilot project will sponsor 100 children for two years with a possibility of renewal and addition of beneficiaries. Funding includes fees, school uniforms, backpacks, exercise books, pens, pencils and syllabi for teachers.

The project also is giving cash and teaching materials to heads of the recipient schools. School administrators will use the money for administrative costs since it isn’t needed for school fees since the Sierra Leone government is paying fees for all primary school children for two years after the Ebola epidemic.

The empowerment project is also providing up-to-date syllabi created for Sierra Leone by the ministry of education in collaboration with UNICEF, British Council, Plan International, World Vision and other educational partners. Many teachers in remote communities rely on old and sometimes-outdated materials. The updated syllabi cover classes one to six; at completion of class six, students take the National Primary School Examination. 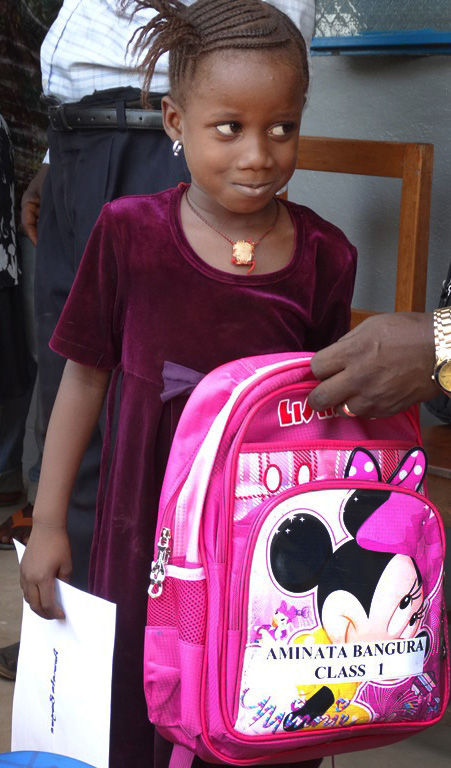 Kamanda advised the mothers present at the distribution to take care of the uniforms and learning materials so that the children would get the most out of them. She particularly encouraged parents to send their daughters to school because education benefits both the students and their families and communities.

Edward Johnson, head teacher at the United Methodist primary school in Mamaka, said Bishop John K. Yambasu, serves people just as Christ did. He recalled the water well funded by the empowerment project, which is now the sole source of safe drinking water for the community.

At Rochain Kamandao, another recipient community, Kamanda cautioned the hopeful parents that not all children would receive scholarships during this first distribution.

“We would have loved to support every child,” Kamanda said, “but we have funding for 100 children for now. We asked your community to identify the [neediest]. We prioritize girls because … we want more girls to be educated.”

At Lungi, in the Moyamba District, Kamanda thanked families for welcoming the guests. “It is already evening,” she said, “and you have patiently waited to receive us. This shows you appreciate The United Methodist Church and the people of Norway. Everything here is new. We have not given you substandard materials because you are in a village. You deserve the best like any other child elsewhere.”

Appealing to parents and teachers to support girls’ education, she cited the Rev. Jane Lahai — a United Methodist pastor and native of Lungi who also heads a primary school in Moyamba town — and herself as examples of what educated girls can achieve.

The Rev. Milton Vandy thanked God for educational opportunities for children in rural communities. Lahai encouraged children who did not receive scholarships not to lose heart because the empowerment project would consider other scholarships in the future.

Sierra Leone schools operate on an academic calendar of two semesters instead of three because schools closed for more than a year during the Ebola crisis. The new school year started in January.

Education committees in each location identified the most deprived children and sent the lists to the Community Empowerment for Livelihood and Development. The United Methodist Church in Norway and the Norwegian government funds the program through the Norway/Sierra Leone partnership.

Jusu is a communicator for The United Methodist Church in Sierra Leone.

The driver of the SUV that crashed into and killed Sierra Leone Area Bishop John K. Yambasu has been charged with seven counts, including speeding.
General Church

The Sierra Leone Area bishop was remembered as a natural bridge builder who brought people together in the church and in the world.
Church Growth