Editor's note: At 9:30 a.m. Eastern Time on Friday, Dec. 21, Newtown (Conn.) United Methodist Church pastors will ring the church's bell 28 times in memory of the 28 victims of the Dec. 14 tragedy in Newtown and its Sandy Hook Elementary School. Other churches also are being asked to ring their bells at 9:30 a.m. The ringing of the Newtown church bell will kick off a national moment of silence in the United States.

The Rev. Mel Kawakami, senior pastor of Newtown United Methodist Church, has the difficult duty of shepherding his flock through the anguish of the second deadliest school shooting in U.S. history. 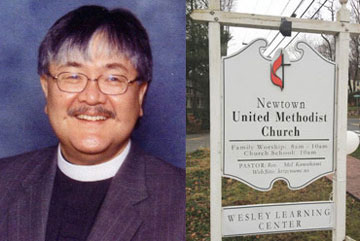 Two 7-year-olds from the congregation were among the 20 children and six adults who were killed Dec. 14 in the shooting rampage at Sandy Hook Elementary School.

Kawakami, who has served the Newtown church since 2008, found himself on Dec. 15 rewriting a sermon that he had expected to accompany the church Christmas pageant.

After the second worship service Dec. 16, Kawakami shared his thoughts with his friend of more than two decades, the Rev. Arthur McClanahan, now a member of the Iowa Annual (regional) Conference and the conference communicator.

McClanahan is a former clergy member in the New York Annual (regional) Conference, which includes the Newtown area. McClanahan had been in the northeast for the last week reporting on the devastation from Hurricane Sandy. He was in Connecticut the day of the shooting and went to Newtown on behalf of United Methodist News Service.

Read and listen below to their conversation.

Holding to each other

McClanahan: Two services, filled to capacity … people were holding on to each other.

Kawakami: Holding on to each other in pain … the church becomes a community to hold that pain and to allow them to feel that pain and then to point to the healing. Even just to name the fact that the pain is part of a process.

It's too much to have an expectation about tomorrow that when all the news trucks drive away and the president leaves … that the pain is going to go away … that's a critical part of being the church … we provide that place where people can come with that pain.

Today, in worship, we had people who, on Friday (at the Sandy Hook Elementary School) were holed up in closets, holding on to each other, thinking that that was their last moment. We had people splattered with blood. We had the sister of one of the victims who came today … she wanted to come to church.

The church is that place where, with God's help, the healing presence of Christ, and the Holy Spirit at work … where healing can happen, or, at least, begin to happen.

Turning to the pain

McClanahan: You invited people to turn into the pain, rather than turning away from it.

Kawakami: Exactly. The temptation is to wall it off and then to pretend that it wasn't there. The only way through pain is through it.

Feeling that we were feeling

McClanahan: Emotions are raw. Many men in the congregation were feeling OK about showing their vulnerability … and their tears came out.

McClanahan: That was shared across the community … the tears were not in isolation … even at the end, when the bishop invited everyone to hold hands, no one was "outside the circle."

Kawakami: The role of the church, in moments like this, is to provide a safe place where people can feel what they're feeling and then begin to open themselves up and out to God's healing. That's hard to do when you're in the world, when you're an executive and you're trying to get things going … Those aren't the moments when you can feel things … Oftentimes it runs just the opposite of that - you need to lead with your head.

How will forgiveness play out?

McClanahan: Remembering the Nickel Mines shooting in the Amish country of Lancaster, Pa., was a powerful illustration … The community offering forgiveness early on … How do you imagine that forgiveness will play out in the life of Newtown - Newtown United Methodist Church and the Newtown community?

Kawakami: I think that it's going to take time. Why the Amish story struck me was the immediacy … and I knew in my own heart that I wasn't there yet. I hope that other people who aren't there yet then also felt permission to be angry, and maybe even feel vengeful, but also opening up to the possibility of grace. You tell the story as a statement of possibility without saying, "This is where you have to be." It became a way of my being able to talk about the possibility of forgiveness.

McClanahan: Change was imposed upon the community in a radical way Friday. How can communities of faith help people to redefine the new reality, from a label that keeps in them in the anguish to a place of wholeness, in a different way?

Kawakami: In part, the community prayer vigil is one small step to beginning that process, a time when we can be together as God's people … and that means all of God's peoples. It's an intentionally interfaith service - we're coming from all different fingers of God to reflect the one hand of God … and in that unity the healing process begins … It becomes visible evidence that none of us are well, that we stand together, and in standing together, it becomes a statement of possibility in itself.

We're also being intentional about this being a process. We're going to keep doing this … We're going to have a community-wide effort … and it doesn't end with one - it keeps on going.

What can others do?

McClanahan: There was a broad outpouring of expressions of love, sympathy, support, even silent witness … far beyond the geography of northwest Connecticut. What can people beyond the bounds of Newtown do for Newtown tomorrow, next week, next month, next year?

Kawakami: I'm not sure that I have an answer. This is a process. This is a journey. We may be able tell you what our next step is, but where that will go and where that will lead is really hard to know. There is one thing that can be consistent. The temptation is going to be that when this story falls off the headlines, people will believe that "they must be OK because we don't hear about them." And yet, what I was trying to say, in this morning's sermon, is that the ripple effects are going to be such that this is going to be a process. It may last, in essence, forever, because we will be known as "Newtown - that's where those children were shot." What we do with that and how we respond to that is what this process is about.

That's why prayer is so important because it's going to go beyond the headlines and beyond tomorrow, next week, next month. If you will keep us in prayer … that's what's going to help.

Once needs arise, we'll be able to name them. Then the hope will be that there will be people to fill them. All of us are being intentional about saying that we need a grief counselor, we need someone who can come in and talk with our children. And the good news is that there have been scads of people who have volunteered.

My hope is that, a year from now, when it's coming up to the anniversary, and we need people of faith to come and remember and witness, that people will be here too … not just as it was, today, with a full sanctuary, but rather, an ongoing presence in prayer.