Supporters of guaranteed appointments for United Methodist clergy have a new reason for hope.

The Rev. L. Fitzgerald "Gere" Reist II, secretary of the General Conference, informed the Council of Bishops late June 11 that the language in the 2012 Book of Discipline "does not eliminate the security of appointment for elders."

But, other denominational leaders question Reist's interpretation of what the 2012 General Conference, the denomination's top lawmaking body, accomplished when it met April 24-May 4 in Tampa, Fla.

At issue are two potentially contradictory sections of the Book of Discipline, The United Methodist Church's law book.

The 2012 General Conference deleted in the book's Paragraph 337 the required security of appointment for elders in good standing. The changes allow a bishop to recommend an elder be put on transitional leave.

However, the assembly left Paragraph 334.1 intact.

The latter paragraph says: "Every effective elder in full connection who is in good standing shall be continued under appointment by the bishop &ellipsis ."

Some bishops contend that General Conference did not so much eliminate security of appointment as modify it. 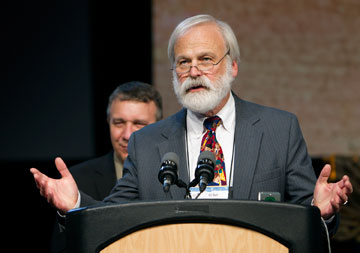 The Rev. L. Fitzgerald "Gere" Reist II, secretary of the General Conference, addresses the conference in Tampa, Fla. Reist informed the Council of Bishops on June 11 that the language in the 2012 Book of Discipline "does not eliminate the security of appointment for elders." A UMNS file photo by Mike DuBose.

"Someone having an appointment is not the same thing as them being appointed to serve a church," Indiana Area Bishop Michael Coyner said in an email to bishops that he shared with United Methodist News Service. "Transitional leave is an appointment and so is a part-time appointment."

Questions regarding the elimination of security of appointment will go before the Judicial Council at its next meeting in October, and this debate could come under consideration.

What happened at General Conference

The Higher Education and Ministry legislative committee - the first stop at General Conference for appointment-related petitions - voted 68-7 in favor of changes to Paragraph 337.

"The intent of the (Higher Education and Ministry) legislative committee was clear, even if our action was not as clear as our intent, and the intent was the elimination of the language of security of appointment," said the Rev. David Alan Bard, the committee's chair. He is pastor of First United Methodist Church in Duluth, Minn.

Because of the legislative committee's overwhelming support for the changes, the petition went on the General Conference consent calendar.

The consent calendar is a tool used by General Conference to expedite legislation wherein recommendations from legislative committees with no more than 10 votes in opposition are grouped and approved together.A motion to reconsider the item on May 1 failed by a vote of 564 to 373.

On May 4, General Conference delegates approved a motion to ask the Judicial Council whether the removal of security of appointment passes muster under the denomination's constitution. 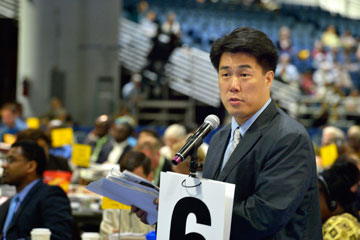 The Rev. We Hyun Chang argues for retaining guaranteed appointments for clergy, during a debate in Tampa. A UMNS file photo by Paul Jeffrey.

The legislation to eliminate security of appointment originated with the Study of Ministry Commission. In its report, the commission said the practice is not financially sustainable and "limits the ability of the church to respond to the primacy of missional needs." An earlier report estimated there are 784 more U.S. clergy than positions needed in the church.

The Higher Education and Ministry legislative committee voted unanimously against the commission's petition, which included changes to 334.1, and thus it never went before the full plenary.

The Rev. Amy Gearhart, a member of the Study of Ministry Commission, chaired the subcommittee that dealt with that petition. She is the senior pastor of Missouri United Methodist Church in Columbia. She said that petition was voted down because it also related to early ordination for elders, which the committee had decided to oppose.

In the rush of General Conference, Reist said, it is difficult to track how each petition relates to other petitions and other parts of the Book of Discipline not under discussion.

The Rev. Gloria Kymn, a delegate from the Pacific-Northwest Conference and pastor of Maryville (Wash.) United Methodist Church, said she was sad that full General Conference plenary did not get a chance to discuss such a significant change to United Methodist tradition.

Message to Council of Bishops

This is the full text of the message sent by The Rev. L. Fitzgerald "Gere" Reist II, secretary of the General Conference, to the council:

The Book of Discipline 2012 does not eliminate security of appointment for elders. The amendments to paragraph 334 that would have mirrored the changes in 337 were not supported by the committee. They were not voted on in the plenary. The language of 334.1, "Every effective elder in full connection who is in good standing shall be continued under appointment by the bishop provided that if the elder is appointed to serve in an affiliated relationship in a missionary conference (¶ 586) and that appointment is terminated by the bishop who presides in the missionary conference, then the responsibility for meeting this obligation rests with the bishop of the conference of which the elder is a member." remains in effect.

"I am the local church pastor who feels like I'm on the frontlines of working with United Methodists every day," she said. "And I felt like my daily ministry was not important for this body, the general church, to talk about."

She said Reist's concerns give her hope that perhaps clergy will have four more years to prepare for change and reflect better what it "really means to be effective clergy for The United Methodist Church."

The Rev. Thomas Lambrecht, vice president and general manager of the evangelical caucus Good News, has argued cases before the Judicial Council. He agreed with Reist's assessment of the Book of Discipline's language.

"It is my understanding that, if a change is to be made in the Book of Discipline, that change must be made in all relevant paragraphs in order to become effective," he said. "I believe that means that the change to Par. 337 does not override the existing language of Par. 334.1. That would mean that the guaranteed appointment is still in place."

Though often on differing sides, he and leaders of the progressive caucus, the Methodist Federation for Social Action, both had expressed concerns about the elimination of guaranteed appointments.

With the elimination of guaranteed appointment in question, Lambrecht was philosophical.

"I think this shows the level of complexity that is present in the Book of Discipline," he said. "It is so difficult for a body of 1,000 delegates (most of whom are not experts at church law) to make meaningful changes in the way our church functions."