The United Methodist congregation in Maxton, N.C., a farming community of several thousand, was in a bind.

Its historic building - one of the first built for an African-American congregation - was in such disrepair that it already had been condemned by the denomination's North Carolina Annual (regional) Conference and the congregation was worshipping elsewhere.

"We really needed to restore that church, renovate it or tear it down and build another," said the Rev. Robert A. Fairley Sr., 75, who was baptized at St. George and came back as a pastor in 1983. Because local banks did not want to invest in the old building, the options seemed limited.

A solution materialized through a unique construction ministry program in the North Carolina Conference that offers loans and project help blending professional subcontractors with volunteers and resulting in lower costs. John Paul "J.P." McGuire is the program's licensed general contractor.

Founded before the Civil War, St. George is one of the oldest congregations in Robeson County, with this building dating back more than a century. That legacy is one reason why the congregation voted for restoration over demolition, said Vivian Brown-Morrison, head of the building committee.

"When they brought me in to look at it, I said, 'Absolutely, we had to save it,'" McGuire recalled. "It was important both for the church and for the community that we try to preserve it."

When St. George re-opened its doors for Sunday worship Sept. 16, the sanctuary was filled to capacity. The congregation also expects a crowd at the Oct. 21 homecoming service, which will feature McGuire as a speaker.

Construction as a ministry 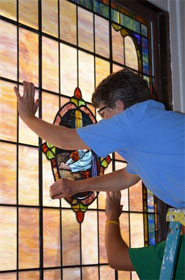 The church construction ministry program was started in 1990 after several rural churches had trouble getting reasonable bids for their renovation projects, said Gary Smith, a licensed contractor who was hired to run the program until the conference's Board of Missions Inc. was established as a licensed general contractor within the state of North Carolina.

The priorities were rural churches, ethnic minority churches and new church starts. Since then, the Board of Missions has completed 40 to 50 projects, both large and small. "The actual cost to the local church is about half what it would cost if they went out and hired a third-party contractor," explained Smith, who is semi-retired and now reports to McGuire.

"It's a labor of love," he said. "I just can't imagine getting up in the morning and not being involved."

McGuire began his career as a residential contractor, but his later jobs - with Habitat for Humanity, in Louisiana hurricane recovery and as an outreach coordinator in South Carolina and California - have been all about ministry. The South Africa native also is involved with global mission projects.

The advantage to having the Board of Missions as a contractor, he noted, is "we don't have to tack on a lot of overhead to pay my salary or salary of other employees. Our overhead is lower, so we are able to lower our prices."

When the work started at St. George in August 2011, McGuire kept a blog sketching the progress.

"Restoration or renovation is always harder than new," he observed. "We discovered things along the way that we didn't expect or didn't know, but there was nothing insurmountable. We had great volunteer turnout."

In fact, the congregation was overwhelmed by the support it received from Maxton and beyond.

"We had many volunteers from our church and from the community and from other surrounding churches," Brown-Morrison said. "It became a talking point in the town: St. George is being restored. It was like everybody was pulling for us."

A spring barbeque fundraiser drew many who wanted a peek at the restoration in progress. "It was heart-warming to see so many people showing their support for this church and its quest to preserve an important part of our history," McGuire wrote in his blog. 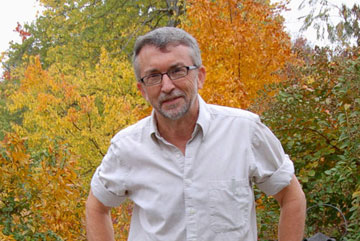 Among the project highlights were:

"It was finished out in a beautiful way for a lot less money than a commercial setting," McGuire noted.

The addition that delighted Brown-Morrison was a stained-glass "rose window" in a place that had been framed originally but then covered over. The window casts a new light into the sanctuary area and its design, the cross and flame logo rising from the wings of a phoenix, symbolizes the building's rebirth.

"It's the most beautiful sight I've ever seen in my life," she said.

A 'doable' ministry for others

The North Carolina Conference does have some unique advantages for its construction ministry program. In addition to support from the Duke Endowment, the conference has a $5 million fund established in the 1950s for church building loans. Initially, the idea was to help congregations that could not qualify for commercial loans, explained the Rev. Sam Loy, chair of the Board of Missions.

Even without such advantages, Loy believes construction ministries are "pretty doable" for other conferences. Volunteer help is a key component to holding down costs. Loy still maintains a license as an electrical contractor and supervises the volunteers who do electrical work for projects. 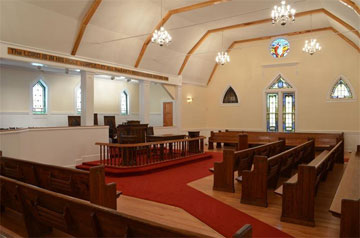 The church interior awaits a final inspection and a dedication.

Volunteers are willing participants because "they know the value of that help," he pointed out, while members of the churches involved see the value of volunteer construction programs, begin to grasp the "great advantage" of being a connectional church and realize "the conference really does care about them and has resources to help them with their life and their ministry."

McGuire suggests that conferences interested in such ministry focus on finding at least a part-time licensed contractor, work up a loan program and build a core of volunteers. The projects can start small, he said, noting that many rural churches have problems with termites, rot or roof damage. "There's room for a lot of ministry in our conferences just to handle that."

In North Carolina, the construction ministry team already is at work on a new project: Crossroads, a new church start in a fast-growing section of suburban Fayetteville. A metal building formerly used by a nondenominational church is being divided into three sections for a sanctuary/assembly hall, coffeehouse and internet café and room for "parents' morning out," McGuire said.

Members of St. George are enjoying their new facility and making plans for an official consecration service next year.

"We know that we did the right thing now. Everybody's happy," the pastor said. "Had it not been for the Board of Missions, we would not have been able to do it."