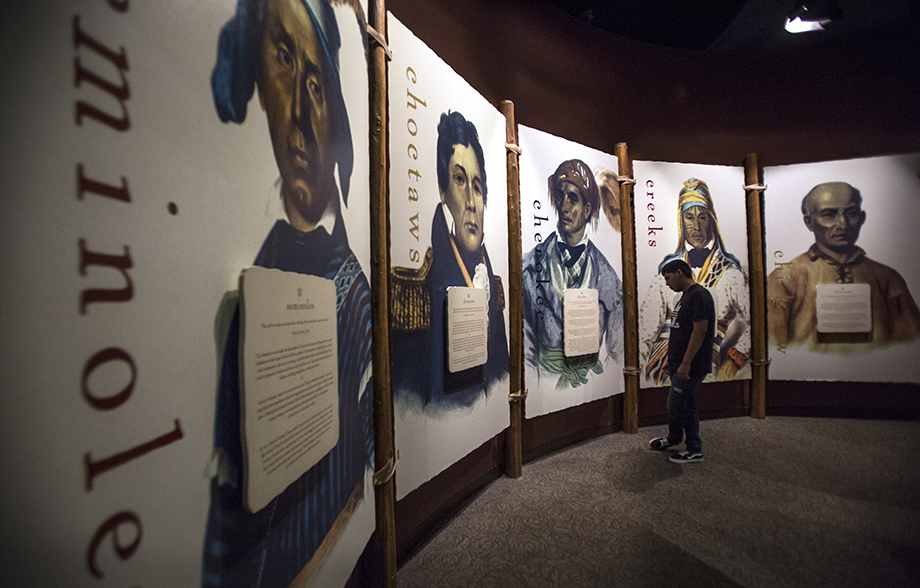 Mika Sam, 15, studies a display of Native American leaders inside the Museum of the Cherokee Indian in Cherokee, N.C.  A member of the Choctaw tribe, he attends Great Spirit United Methodist Church in Bogue Chitto, Miss.

The conference, sponsored by the Southeastern Jurisdiction Association for Native American Ministries, met July 28-30, and divided locations between Lake Junaluska Conference and Retreat Center and Cherokee, North Carolina. The beautiful lake and mountain setting was the perfect spot for the conference’s invitation to “renew yourself.” 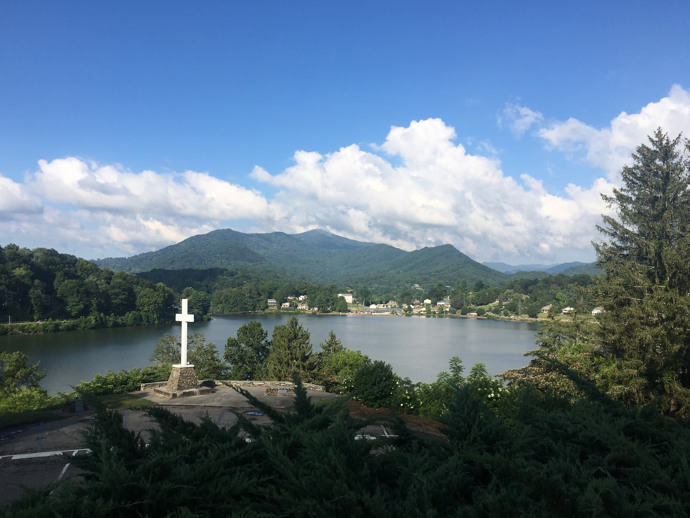 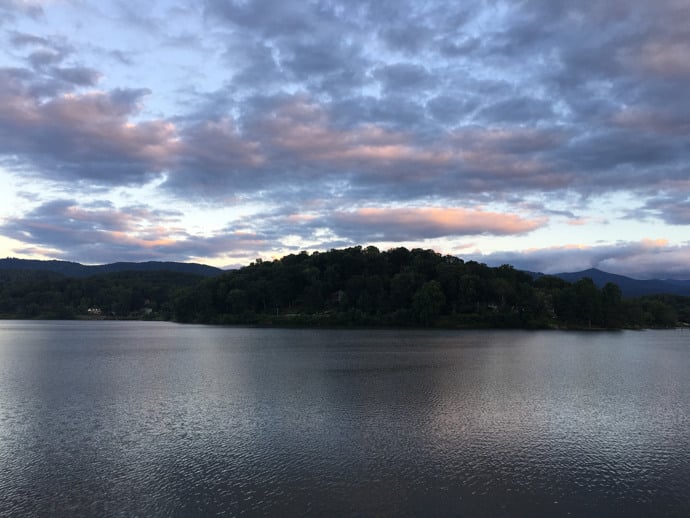 The lake at dusk.

Freeman Owle, keynote speaker and elder with the eastern band of Cherokees, shared stories of growing up in Cherokee, North Carolina. He recounted Cherokee history and emphasized the hardships experienced by Native Americans. He also talked about the importance of being attuned with nature — body, mind and soul — in order to discern the will of the spirit. 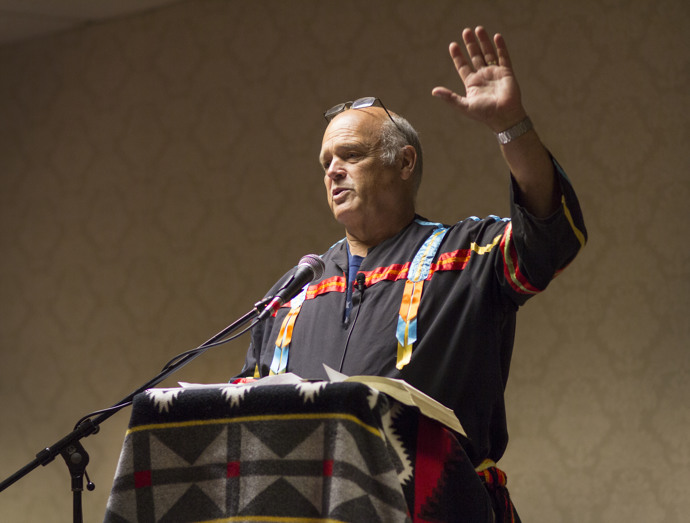 Freeman Owle, elder with the eastern band of Cherokees, shares memories of growing up on the Cherokee reservation. 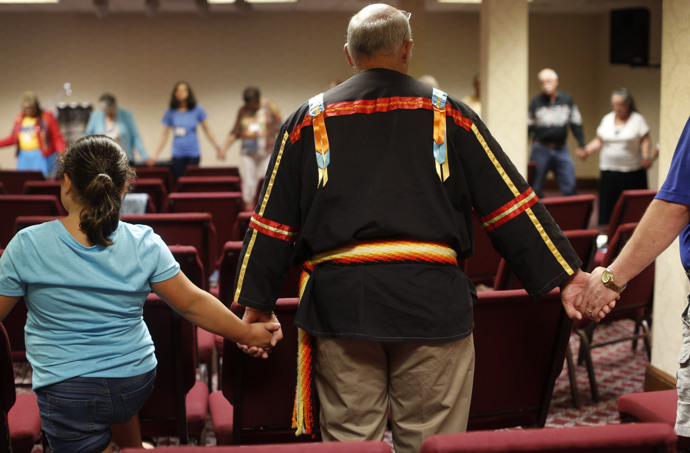 Conference attendees join hands in a circle of prayer.

On Day 2 of the gathering, the group experienced a “Cherokee Immersion,” which included visiting the Museum of the Cherokee Indian and Oconaluftee Indian Village in Cherokee.

The village featured reenactments of Native American life and homes, along with crafts from the 1700s. Children were especially fascinated by the demonstrations by potters and weavers (finger weaving), as well as displays on beading and weapons — such as dart guns for hunting turkey and small game. 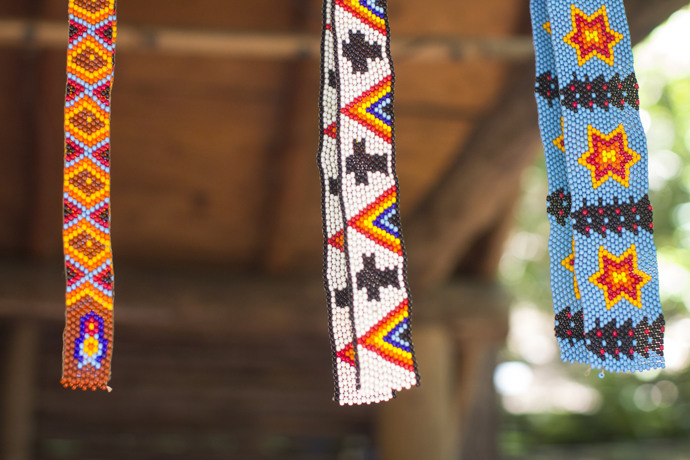 Examples of fine beading are on display at Oconaluftee Indian Village in Cherokee, N.C.

The group also watched a reenactment of fighting and experienced the drama “Unto These Hills,” which tells the story of the Cherokee from the first contact with Europeans through the Trail of Tears, which removed Native Americans from their homelands.

Angela Bullard from the Lakota Sioux tribe drove a van of members from Triad United Methodist Church in Greensboro, North Carolina. “One of the great things about this conference is to be able to sing songs in different languages,” Bullard said. 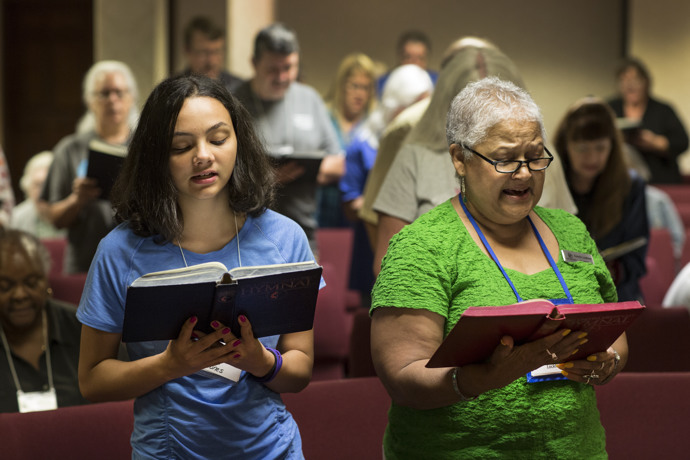 For conference coordinator and Southeastern Jurisdiction Association for Native American Ministries interim director Connie Locklear, it was “all siblings on deck,” as she teamed with her sisters, Daphine Strickland, president of the association, and the Rev. Donna Strickland. 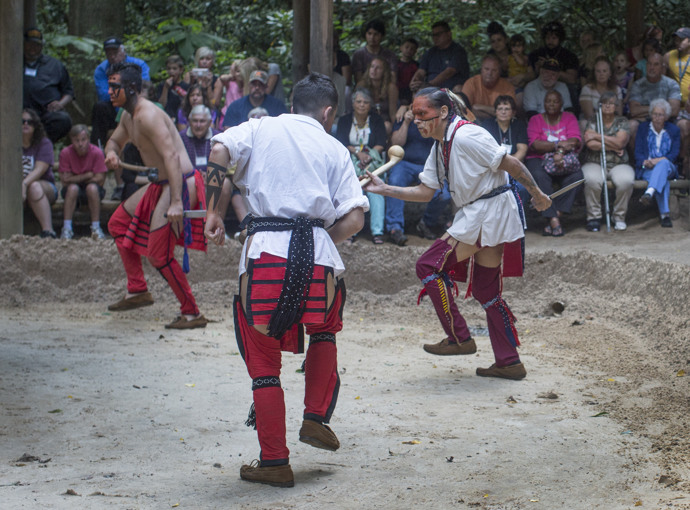 An audience (including conference attendees) watches a reenactment at the Oconaluftee Indian Village in Cherokee, N.C.

Members of the Tuscarora/Lumbee tribe, the three sisters handled registration, piano and program.

Melba Checote-Eads from the Muscogee Creek tribe, who lives in Watertown, Tennessee, views the Native American association as a great way to connect with other Native Americans and to share vision and ministry. 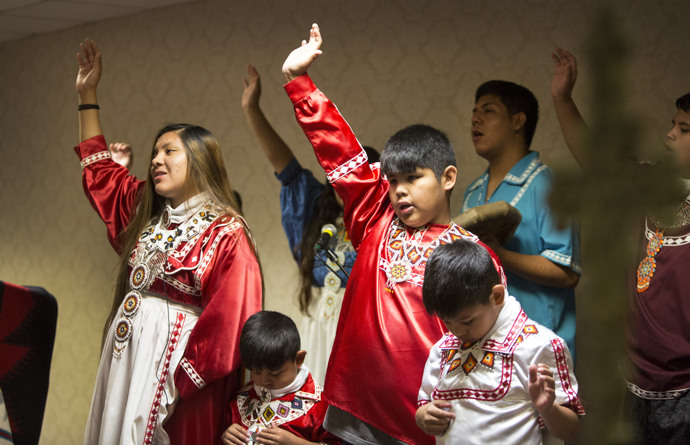 Members of the Choctaw tribe from Mississippi sing in different languages. 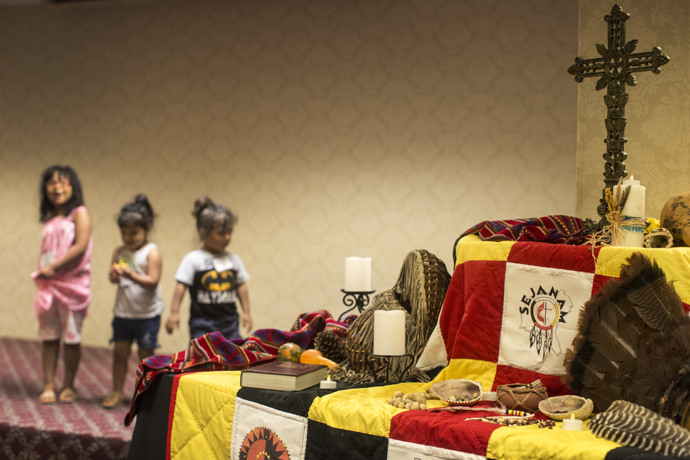 A display at the conference features symbolism of faith and Native American culture. Behind the table, descendants of the Tuscarora/ Lumbee/Otomi tribes represent the future.

Next year marks the 30th anniversary of the Native American Summer Conference and plans are underway for many activities including reenactments of the Trail of Tears. 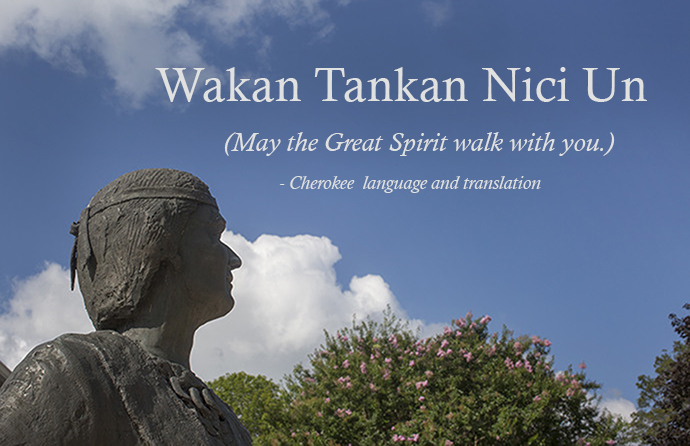 A sculpture of Chief Junaluska, leader of the Eastern Band of Cherokee Indians in western North Carolina, is featured at Lake Junaluska Conference and Retreat Center.

To view all of the photos from United Methodist News Service's trip to the Native American Summer Conference, check out our Flickr slideshow.