Native Americans, including United Methodists, were jubilant over a U.S. Supreme Court ruling affirming their jurisdiction over criminal prosecutions of tribe members on reservations in Oklahoma.

“I’m excited. I am happy,” said Anne Marshall, councilwoman for the Muscogee (Creek) Nation and member of the Wewoka United Methodist Church in Holdenville, Oklahoma. “The U.S. is going to start having to honor these treaties.”

C. Blue Clark is an emeritus history professor and instructor of law at Oklahoma City University School of Law, and the author of “Lone Wolf v. Hitchcock: Treaty Rights and Indian Law at the End of the Nineteenth Century.”

“It’s astounding!” he said. “Stunning! I assumed that the justices would rubber stamp another anti-Indian opinion, which have been flowing out without cessation since the late 1970s.”

“I’m Muskogee (Creek), and everyone that I’ve seen and talked to … are all excited that this took place,” Deere said.

Many Native American tribes have signed treaties with the U.S. government only to see the courts fail to uphold them, said the Rev. David Wilson, conference superintendent of the Oklahoma Indian Missionary Conference.

“There are 39 tribes in the state of Oklahoma now, probably the most of any state,” Wilson said. “So I would think many tribes are going to be looking at this ruling and seeing how they could take advantage of that.”

The 5-4 ruling, McGirt v. Oklahoma, released July 9, was written by Justice Neil Gorsuch. When he was appointed to the Supreme Court in 2017, Gorsuch had the support of the National Congress of American Indians.

“He’s written Indian law decisions, particularly when he was on the 10th Circuit (Court of Appeals) that show a deep understanding of the history,” said Sarah Deer, professor of Women, Gender & Sexuality Studies at The University of Kansas and a member of the Muscogee (Creek) Nation.

Gorsuch started his majority opinion acknowledging the Trail of Tears, the forced relocation of about 60,000 Native Americans from their southeastern U.S. homeland to land west of the Mississippi River designated as Indian territory. Members of the Creek, Cherokee, Chickasaw, Choctaw and Seminole nations were forced to move.

Disease killed some 4,000 before they arrived.

By treaty, the relocated Native Americans were promised they could keep their new land permanently. Lawyers for the state of Oklahoma argued that more than 100 years of precedent meant that the treaty was null and void.

Gorsuch and four other justices disagreed.

“On the far end of the Trail of Tears was a promise,” Gorsuch opened his majority opinion. “Forced to leave their ancestral lands in Georgia and Alabama, the Creek Nation received assurances that their new lands in the West would be secure forever.”

Despite the state acting as if the treaty was void for many years, Gorsuch said only Congress can nullify it. 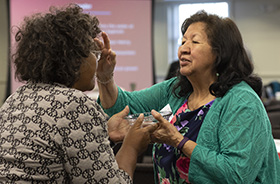 “Today we are asked whether the land these treaties promised remains an Indian reservation for purposes of federal criminal law,” Gorsuch wrote in his opinion. “Because Congress has not said otherwise, we hold the government to its word.”

The original treaty was signed in 1832. During the Civil War, Native Americans, some of them slave owners, fought for both the North and South.

“At the end of the Civil War … all tribes had to sign a peace treaty with the United States,” Deer said. “In some ways, Creek Nation and others were punished because of their alignment with the Confederacy.”

In a new treaty in 1866, the reservation was cut by about half, but still takes in much of eastern Oklahoma, including Tulsa, its second-largest city.

“Even though it was a smaller spot of land, (the treaty) did guarantee that that reservation would exist forever,” Deer said.

“A lot of people thought it had been sort of nullified over the course of the last century or so,” she said. “But in fact, what the court found … is that despite some of the efforts to destroy the Creek Nation, there was never a clear, explicit effort to disestablish the reservation. So today, that 1866 treaty is again recognized by the federal government.”

In his dissenting opinion, Chief Justice John Roberts said “a century of practice confirms that the five tribes’ prior domains were extinguished,” adding that today tribe members make up less than 10 to 15% of the population there.

“Across this vast area, the state’s ability to prosecute serious crimes will be hobbled and decades of past convictions could well be thrown out,” Roberts wrote. “On top of that, the court has profoundly destabilized the governance of eastern Oklahoma. The decision today creates significant uncertainty for the state’s continuing authority over any area that touches Indian affairs, ranging from zoning and taxation to family and environmental law.”

The McGirt v. Oklahoma case began as an appeal by Jimcy McGirt of his conviction and 1,000-year sentence for the rape of a 4-year-old relative. McGirt’s attorneys argued that his conviction be overturned because he was convicted by a state court, rather than a Native American or federal court. 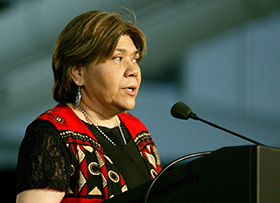 “It makes the case more painful in some ways,” Deer said. “The victims of this perpetrator are still around, living in the same area where this happened.”

“Tribes now in Oklahoma will have the opportunity to have a greater jurisdictional reach in terms of crimes that happen within their boundaries,” Deer said. “I think in the long term, this will make people safer.”

Reservation and U.S. and local law enforcement agencies already work well together in Oklahoma, and that won’t change, according to a July 9 joint statement from Mike Hunter, Oklahoma attorney general, and the five tribes.

“The state, the Muscogee (Creek), Cherokee, Chickasaw, Choctaw and Seminole nations have made substantial progress toward an agreement to present to Congress and the U.S. Department of Justice addressing and resolving any significant jurisdictional issues raised by the U.S. Supreme Court’s decision in McGirt v. Oklahoma,” the statement said.

“The nations and the state are committed to implementing a framework of shared jurisdiction that will preserve sovereign interests and rights to self-government while affirming jurisdictional understandings, procedures, laws and regulations that support public safety, our economy and private property rights.”

McGirt v. Oklahoma will be covered in history textbooks and will be the subject of museum exhibits and art, Clark predicted.

“Many times, society in general never acknowledged that native lives matter,” she said. “Natives seem to get lost. … Maybe we’re not invisible anymore.”

A native of Puerto Rico, the Rev. Giovanni Arroyo knows firsthand what it’s like to be a minority in America, and that experience informs the way he pursues his mission as The United Methodist Church’s point person on inclusion.
Social Concerns

Asian Americans often confront implicit bias in questions like “Where are you really from?” Susan Sungsil Kim has crafted responses to such questions that stand up for her rights while also providing an educational opportunity to those who ask.
Mission and Ministry