Dad was a very simple, kind and gentle person. But deep within, he was a man of steel. He loved his family. He provided for his children. He taught by example. On this Father's Day, I remember my Dad with great affection and love.

Nettles Talbert, 1894-1971: I don't know much about Dad's early life. His parents were Louis and Isabella Talbert. I never met them or saw a photo of them. From what was told to me, Dad was from a large family that lived on the Talbert Plantation in Mississippi. At some point, the family left the Talbert Plantation. Most of the members went north never to be heard of again. My dad, with his brother Sam and sister Addie, came south and settled in the country somewhere near the town of Clinton, La.

Dad met and married a lady from Clinton. They settled in Kenner, near New Orleans. To that union was born a daughter, Beatrice Evelyn. The marriage didn't last. Dad returned to Clinton, where he met and married my mother, Florence (Mom was previously married and had two sons). From the union of Nettles and Florence came five children Melvin, LouBella, Samuel, Irvin and Myrtis. Dad and Mom were sharecroppers on a farm about seven miles southeast of Clinton, where I grew up. Mom finished seventh grade. Dad never finished first grade. Dad could not read or write. His signature on any legal document was an "X".

Though uneducated, Dad was a very smart man. He managed to do just about anything. He was a barber. He played a guitar, which he taught me to play--a skill that proved very helpful in my early youth leadership in the church. Dad had a strong desire for all his children to be educated. He would often say, "Boy, don't be like me. I want you to be better than me." I often wonder what my Dad might have accomplished if he been granted access to an education.

When I was 9, my dad taught me to plow. To this day, I can still visualize that first row. It was higher than others because I had the plow too deep. With a little help from Dad, the next rows were just fine. When I was 12, Dad taught me to drive our Model-A Ford. He allowed me to drive him from place to place in the country and in town. One day, he stopped to get gasoline. When he drove up to the pump, a young white boy, my age, was attending the pump. My dad said, "Boss, will you fill up my car?" By the time the gas tank was filled and Dad had paid the bill, I was seething with anger. As soon as Dad entered the main highway and we were on our way home, I snapped at Dad. I said, "Daddy, why did you call him boss?" There was silence. When I glanced at my dad, I saw tears running down his cheeks. He quietly said, "Son, one day you will understand." He was right. I certainly do understand.

When I was in about sixth grade, I taught Dad to write (sign) his name. That was a painstaking experience. It took him what appeared to be "forever" to write his name. I wrote his name on a sheet of paper and gave him the pencil to write what he saw on the sheet of paper. It took days to get the task accomplished. But when he finally learned to sign his name, there was such joy on his face. From that time forward, signing his signature on legal documents was a labor of love, very slowly, letter by letter.

In 1946, my grandmother, Louise (Mom's mother), died unexpectedly. That left my grandfather, James, alone to care for himself on his farm. Grandpa James couldn't cook, wash or care for any of the home chores. Plus, he was still running his farm. So Mom had to shuttle back and forth about a mile away to cook food and try to take care of her father. Shortly thereafter, Grandpa invited Dad and Mom to move to the George farm, take over the farm and care for him. So Dad and Mom left sharecropper farming to settle with Grandpa. Caring for Grandpa was an exchange for farming the George farm without cost. When Grandpa James died in 1951, Dad and Mom purchased the old George farm, where Dad lived for the remainder of his life.

Dad taught me some principles that served me well throughout my life: 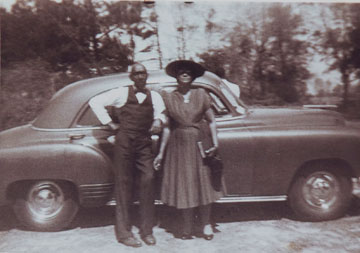 The legacy of my Dad lives on in me. And I would like to believe that some of Dad's legacy lives on in the lives of people that I have had the privilege getting to know, serve and love over the years.

*Talbert is a retired bishop of The United Methodist Church.