The harsh topography makes most of the area inaccessible by traditional motor vehicles. Public transportation is scarce — especially in remote rural circuits that constitute 98 percent of the district. Such traveling challenges are a reality for 16 rural pastors.

For these pastors, the norm is to awaken well before dawn and walk more than 12 miles to a destination. He or she might walk all day, spend the night, do ministerial work, spend another night and walk back home.

On July 20, the ministry of five of those pastors was transformed when five motorbikes, valued at $7,500, were presented to them during a ceremony at Old Mutare Circuit. The motorbikes were a gift from Mutasa Nyanga Homelink, a group of church members originally from the district, who pool their resources to support the pastors.

“The church in Zimbabwe is very grateful for the gracious support to our rural circuits, with the provision of means of transport for pastors and other related support,” Gurupira said. 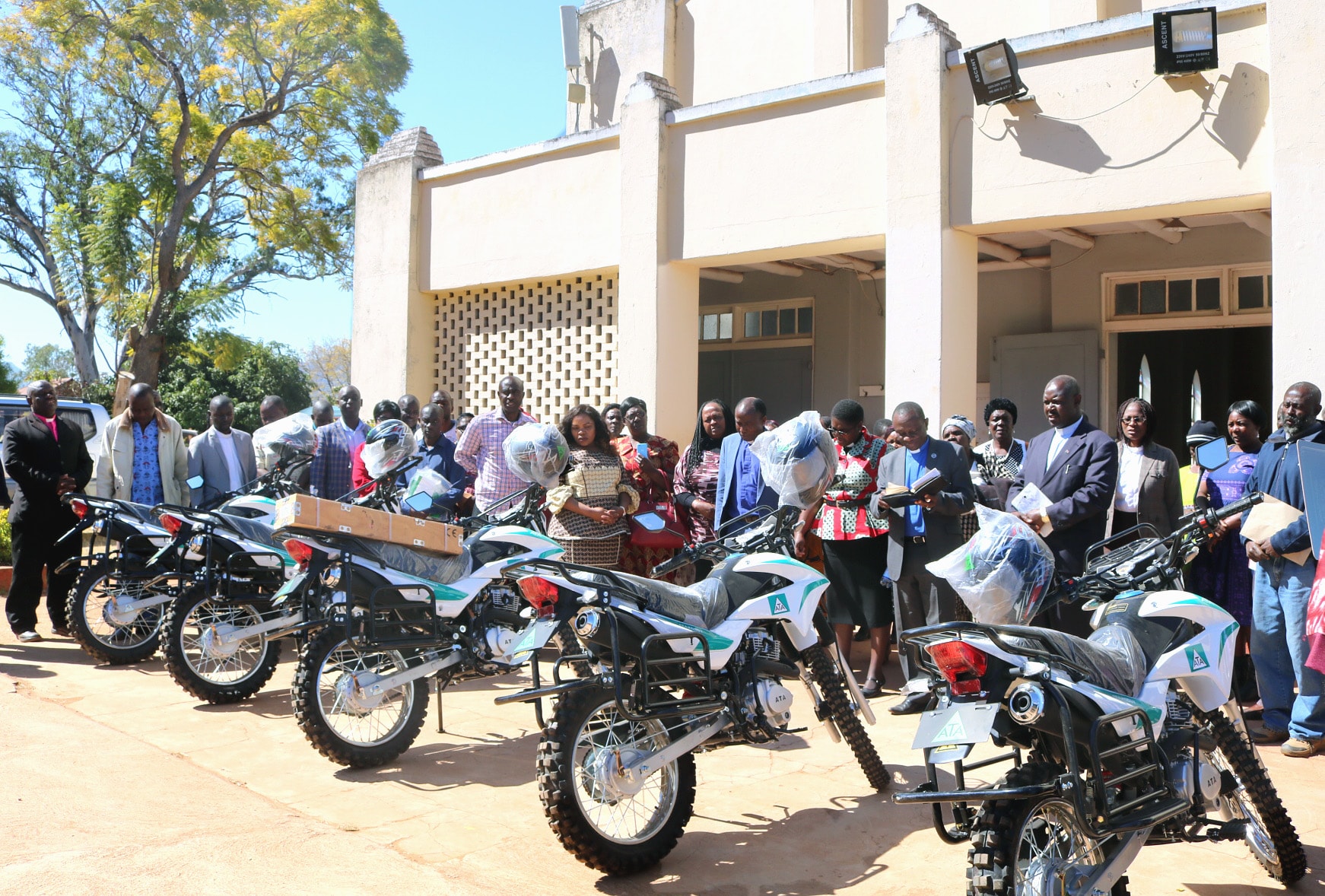 The ministry of five pastors was transformed when they were given motorbikes at a ceremony at Old Mutare Circuit in the Mutasa Nyanga District of Zimbabwe on July 20. The harsh topography makes most of the area inaccessible by traditional motor vehicles. Officiating was the Rev. Alan Masimba Gurupira, administrative assistant to Bishop Eben K. Nhiwatiwa, Zimbabwe Episcopal Area (center right, reading). Photo by Eveline Chikwanah, UM News.

Rudo Sarah Muzamani, Mutasa Nyanga Homelink group coordinator, launched the effort in November 2018, contacting people born or married in the district. “We started by donating a 2,500-liter (650-gallon) water-storage tank in December 2018,” she said. “That was the beginning of bigger things to come.

“It was not easy to sell the idea, despite knowing the hardships the pastors were undergoing.

With this achievement, I see the hand of God. It’s a dream come true. I am optimistic that more things will be unveiled.”

The Rev. Tafadzwa Musona was appointed superintendent of the Mutasa Nyanga District in January 2019. Born and raised in the area, she knows the difficulties they face.

The district needed 16 motorbikes for everyone to be mobile. Five have been donated.  Today, they have paid deposits for five more, leaving only six to be purchased.

“What a mighty God we serve! Big mountains were moved and many prayers answered, Musona said. “I will see to it that all pastors have acquired motorbike drivers’ licenses and received motorbike maintenance courses.”

The Rev. George Gandi is pastor in charge for of the Ruwangwe Circuit, which has four local churches. The farthest is Fombe, which is 37 miles from Kagada North, the central point of the circuit.

“Visiting Fombe, I would wake up early morning, travel and reach the following day to conduct a service,” he recalled. “If by chance I got public transport, I would be very lucky, but mostly I would walk.” Arriving at the church, he was exhausted and dirty.

“This will also make my work very exciting,” Gandi said, “because I can reach every corner of my circuit at any given day and time, presentable and [ready to] attend to ministerial demands.”

The Rev. Simon Chigumira grew up in Mutasa Nyanga District and now lives in the United States. “This is an appeal that easily resonates with my passion for ministry,” he said. “Too often, we are limited to the local church and only work collaboratively at district and conference through a system of apportionments.”

In 2016, Patience Makunike, now based in the United Kingdom, attended the Zimbabwe East and the Zimbabwe West annual conferences, where her eyes were opened to the reality of the plight of rural pastors.

“When I heard about the Mutasa Nyanga Homelink objective,” she said, “I was immediately sold to the vision and needed no persuasion to join the group and started to contribute toward the noble cause. Watching the joy, excitement and gratitude of the recipients brought tears to my eyes.”

The Rev. Joyce Mushavire, one of the two female pastors who received a motorbike, recalled traveling 15 miles to five local churches in Marara Circuit.

“All these hardships did not steal my zeal and commitment to work for the Lord,” Mushayire said, adding that she “felt motivated and captivated witnessing the joy the congregants have with me and more souls coming to Christ.”

Barrington Christian is expected to open early next year and will offer early childhood development, junior and senior schools.
Evangelism

To combat early marriages, illiteracy, alcohol abuse and other issues, The United Methodist Church in Zimbabwe has helped to establish and support churches on two farms in the region.
Local Church