Last month, the Annie E. Casey Foundation reported that another 2.4 million children joined the ranks of the U.S. poor during the past decade.

Last week, the U.S. Census Bureau announced that the total number of Americans living below the poverty line 46.2 million was the highest total ever in the 52 years the bureau has tracked such data.

For church members involved with food pantries and after-school programs, the Casey Foundation's report of "a significant decline" in the economic well-being of low-income children and their families "is consistent with what they're seeing," said the Rev. Mary Ellen Kris, a consultant on ministry with the poor for the United Methodist Board of Global Ministries.

The real face of poverty often isn't apparent to most Americans. People are shocked, for example, "when they find out the (homeless) shelter system in New York City is overwhelmingly children and single moms," Kris said. "There's this huge number of people in need who are really not visible."

United Methodists always have been responsive to the poor with their time and money. One of the denomination's four areas of focus for mission is "ministry with the poor." But what really is needed, she explained, is an understanding of how to break cycles of poverty that are just as problematic as they were 50 years ago.

In other words, part of the denomination's commitment to ministry with the poor has to be understanding how to fix the system, Kris said. 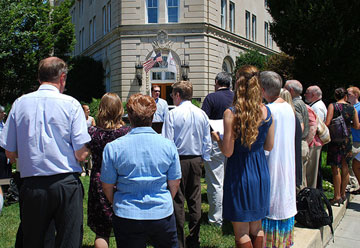 Jim Winkler reads during a prayer vigil for a "faithful budget" this past July in front of The United Methodist Building. A UMNS photo by Wayne Rhodes.

Jim Winkler, top executive of the United Methodist Board of Church and Society, agrees.

"We can and should have feeding programs, soup kitchens, food pantries and gleaning drives to help feed hungry people, but if we are not working for livable wages, affordable housing and health care for everyone, then we are only doing half our job," he said.

According to the Casey Foundation's annual KIDS Count Data Book, some 14.6 million children, or 20 percent, lived in poverty as of 2009.

Statistics from the census bureau's "Income, Poverty and Health Insurance Coverage in the United States: 2010," released Sept. 13, show that the poverty rate is at its highest since 1993.

An important question, says John Hill, an executive with the Board of Church and Society, is why "poverty has risen throughout the last decade, even in a period of economic expansions before the great recession." 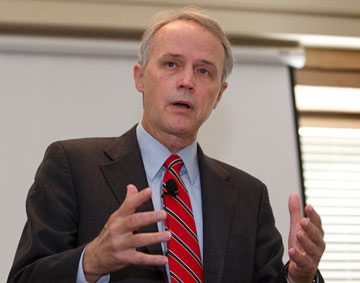 The Rev. David Beckmann, president of Bread for the World. A UMNS photo by Mike DuBose.

A portion of the population is being left behind, particularly in attempts since the recession to get the economy growing, he noted. "Clearly the growth and wealth that is being created in this country is not being shared broadly."

It's important to ask elected officials how they plan to address the issue of poverty. "Part of it is just changing the conversation so that folks in the positions of power ... are confronted with the reality of so many individuals and children living in poverty," Hill said.

Putting a face with a statistic - such as an individual who depends on a safety-net program facing budget cuts — brings the human element into the equation. "Storytelling is critical," he explained. "All the numbers can really be numbing. Members of Congress and policymakers will respond to the stories of what's going on in their districts."

United Methodist Women encourages its members to tackle social issues on both the practical and policy levels.

When UMW members sign up to collect backpacks full of school supplies for needy children, said Julie Taylor, who oversees child and family advocacy for the organization, "I applaud them for that effort."

At the same time, she hopes members will study local education budgets and advocate on behalf of schoolchildren with local and state education authorities.

On a national level, faith leaders, alarmed last fall by proposals for drastic funding cuts to programs that support those in need, met to discuss their concerns. "I suggested that we were really trying to create a circle of protection around initiatives to help the needy and vulnerable, and that stuck," Winkler recalled. 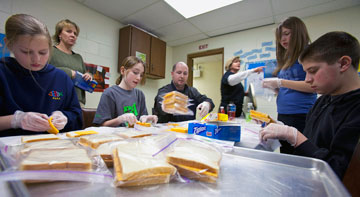 The Circle of Protection project included a series of prayer vigils daily July 11-22 on the lawn of The United Methodist Building on Capitol Hill. More vigils are expected this fall. Winkler and another United Methodist, the Rev. Bob Edgar, were among the 11 faith leaders arrested July 28 when they refused to stop public prayers in the rotunda of the U.S. Capitol.

The Rev. David Beckmann, executive director of Bread for the World, is an active participant in the project. "What we are deciding is the shape of our nation and the shape of the world 10 years from now," he said.

Many United Methodist congregations have been involved in Bread for the World's letter-writing campaigns, and Beckmann is appreciative of those and other efforts. "I think Methodists, in general, just get it; they understand the connection between Jesus and justice," he added. 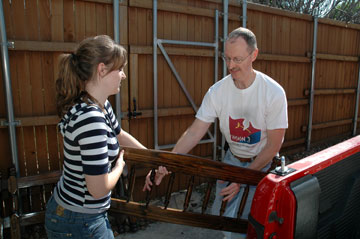 To advocate for that connection on a grassroots level, Winkler suggests that local church members:

"Individuals and local churches should have far more power than they realize," Winkler said.

"The United Methodist Church is the third largest religious denomination in the United States. Elected officials are more aware of our size and influence than are most of our clergy and laity."

Ministry With the Poor