The 20th anniversary of United Methodist mission work in Mongolia and the ordination of the first two local elders in the country were celebrated during the Mongolian Mission Initiative’s annual meeting.

The Korean United Methodist Church decided to build a “Centennial Church” overseas to give thanks to God and celebrate its 100th anniversary meaningfully and significantly. Mongolia was chosen because there was no United Methodist church there.

The Korean United Methodist Church opened a door for the Mongolia mission, fully supporting the development and building of “The Centennial Church” and seven other churches in Mongolia over the past 20 years. 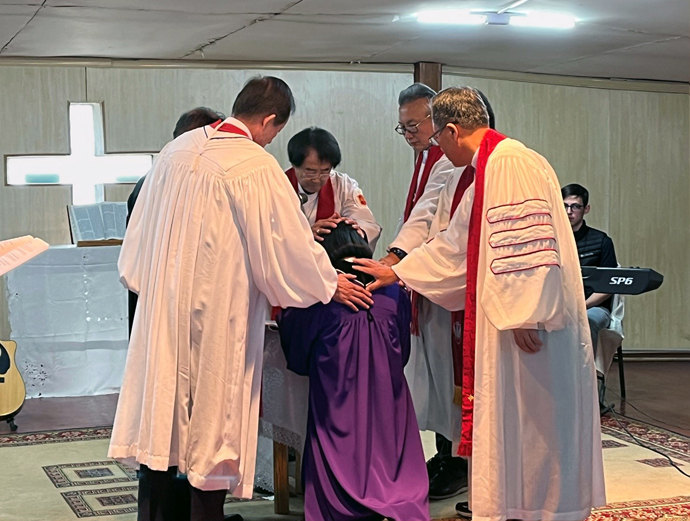 The United Methodist Board of Global Ministries had sent the first United Methodist missionary to Mongolia in 2002. In 2012, the board adopted the Mongolia mission as its official mission initiative, and asked the Council of Bishops to assign a presiding bishop. Since then, Bishop Jeremiah Park has presided over the Mongolia Mission Initiative.

Park presided over the meeting and officiated the ordination service in October. Even though he retired Nov. 2 during the Northeastern Jurisdictional Conference, Park will continue to serve as Presiding Bishop.

At the service, Park recognized seven lay ministers who are trained to lead congregations. As part of a ministry team under the supervision of the Mongolian Mission Initiative, they lead worship, preach the Word of God, and guide the program ministry and mission of congregations in Mongolia. 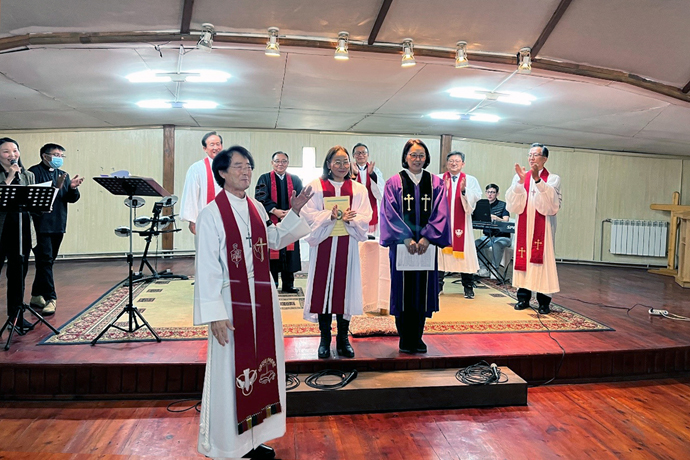 Bishop Jeremiah Park (in front) introduces the Revs. Urjinkhand (purple robe) and Munkhnaran (white robe), the first local elders of the United Methodist Mongolian Mission Initiative, after he ordained them during the mission’s annual meeting at Gerelt United Methodist Church in Ulaanbaatar, Mongolia, on Oct. 3. Photo courtesy of the Asia Regional Office, United Methodist Board of Global Ministries.

Mission pastors are allowed to administer sacraments within the bounds of the United Methodist Mongolia Mission. One of the requirements to be a mission pastor is the completion of courses in pastoral practices for a minimum of two years at a recognized seminary.

One of the requirements to be ordained as a local elder is two years of full-time service as a mission pastor. Pastors also have to get a Masters of Divinity at a recognized seminary.

“The first ordination of two local elders was truly historic. Mongolian Mission now has outstanding indigenous leadership in place and is at the threshold of moving forward to the next chapter of a future vision of local ownership,” said Park. “We hope it was a first step to grow further to become a self-sustaining provisional conference or an independent Mongolian Methodist Church.”

The dedication of the facility symbolizes the mission’s commitment to serving the Mongol community 20 years after the mission began. 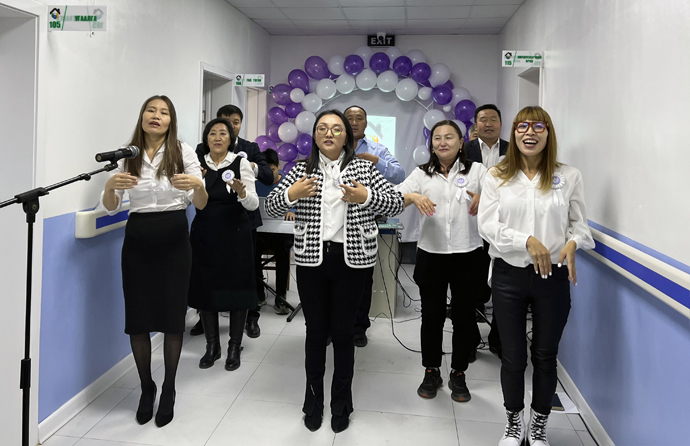 James Cho, a Global Ministries missionary to Mongolia, explained the services and staff of the center.

“Grace Hospice Home & Center was established in 2005 and is one of the five hospices in Mongolia, and has provided care for more than 2,500 advanced-stage cancer patients,” Cho said. “The hospice has three doctors, two nurses, one spiritual care counselor, one bereavement counselor, one driver and three trained volunteers.”

He said that staff covers the entire city of Ulaanbaatar, the capital of Mongolia, 24 hours a day and seven days a week. Cho asked for prayers for the facilities and for an upcoming license because it is waiting for permission to care for 15 patients in the facilities.

“The Korean churches have raised about $250,000 for the hospice center and its equipment,” said Park. “It signified and demonstrated the partnership and commitment of the Korean United Methodist Church community to the Mongolian Mission Initiative.”

Despite the accomplishment of the Mongolia mission over the past 20 years, the missional environment in Mongolia is not easy. The Christian population in Mongolia is less than 2%.

More than half of the population lives in the capital, Ulaanbaatar. The number of people migrating to cities is rapidly increasing, and people are facing various social problems as they undergo rapid urbanization and industrialization, which are large changes from traditional nomadic life.

However, in this challenging situation, missional opportunities are increasing.

He quoted the biblical passage from 1 Thessalonians 3:9 at the ordination service as he summarized the 20 years of the Mongolia mission: “How can we thank God enough for you in return for all the joys we have in the presence of our God because of you?”

The event brought together nearly 200 members for the ordination of new leaders, lectures, worship and other celebrations.
Mission and Ministry

The Waughtown and Sunnyside neighborhoods in Winston-Salem, North Carolina, are gentrifying, pushing out of the community the people the Rev. Julie Wilson is trying to serve. The Open Arms Community center is looking into helping lower-income people get mortgages so they can remain in the area.