A mission leader who died serving one of the world's poorest nations was remembered as a friend and advocate for the most vulnerable of God's children.

More than 700 friends, family and mission workers from throughout the world packed University United Methodist Church Jan. 23 to celebrate the life of the Rev. Clinton Rabb, 60, who died from injuries received in the rubble of the earthquake that struck Haiti Jan. 12. 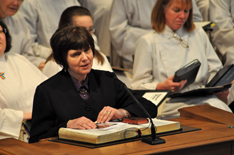 "He was my north, my south, my east and my west," the Rev. Suzanne Field Rabb
said at the funeral of her husband.

Tears, some laughter and moments of profound silence filled the two-hour service that took participants from the plains of Mongolia to baptisms in Russian prisons to the darkness of post-quake Haiti as witness after witness spoke of the passion for life and faith of the director of the Mission Volunteers program at the United Methodist Board of Global Ministries.

"As we are gathered here this day, the occaision of our worship is the death of Clinton Rabb. The purpose of our worship is to give thanks to almighty God for his life and for life eternal," said Bishop James Dorff, who leads the Southwest Texas Annual (regional) Conference, where Rabb was a clergy member.

In an emotional presentation of a plaque to the Rev. Suzanne Field Rabb, Clinton Rabb's wife, Bishop Juan Alberto Cardona said the Methodist Church of Columbia wished to pay homage to the man who loved all people, "especially the smallest of this world."

"No one, Cardona said, "has love as big as those who give their life for their friends."

Bishop Joel Martinez, the interim leader of the Board of Global Ministries, said Rabb was a big man in his physical size, in his vision of global mission and "in his embrace of other people, of all colors and creeds &ellipsis and places. Clint was a person who loved and reached out."

Rabb was in Haiti to discuss ways to assist the impoverished island nation. He had joined five colleagues for a dinner meeting at the Hotel Montana in Port-au-Prince when the Jan. 12 earthquake struck. He and the Rev. Sam Dixon, top executive of the United Methodist Committee on Relief, found their legs pinned under a concrete slab. Two days later, French rescue workers found the group, but it took hours for them to free Rabb.

Rabb was airlifted to Florida but died of his injuries at a hospital there on Jan. 17. Dixon died earlier in Port-au-Prince. 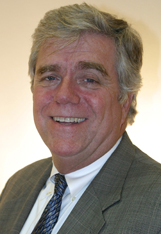 The Rev. James Gulley, an UMCOR consultant who was trapped with Rabb and Dixon, struggled to control his emotion at times as he spoke of the ordeal. Although Rabb was pinned down in the rubble with his legs broken, Gulley said, he would spend much of his time trying to lift up Dixon to make him more comfortable by creating a makeshift bed of plaster and laptop bags.

That strength, and his resilience through days of agonizing pain and vicarious suffering, gave hope to his colleagues that Rabb would survive. At one point, as rescue workers struggled to free him, Rabb told a reporter, "Please tell my wife that I deeply love her."

"I can't answer the question of Job, of why some people suffer and die and others do not," a shaken Gulley said at the memorial service. "We all will someday meet again."

Amid words of hope and resurrection, mourners also experienced the depth of the grief being suffered by Rabb's family and the loved ones of so many tens of thousands of other people who perished in the quake. Rabb's purple-draped coffin was at the front of the church, where a large cross serves as the backdrop.

There is a deep abiding grief, one that would extinguish the stars and dismantle the sun, with the knowledge, "My beloved Clint is dead," Suzanne Field Rabb said.

"He was my north, my south, my east and my west," she said. "I thought my love would last forever."

Many at the service recalled Rabb as a man with a gentle, kind spirit, but a passion for service.

"Clint never waited for the world to come to him," said West Ohio Bishop Bruce Ough, president of the Board of Global Ministries. "He went to the world. He channeled the talents and equipped thousands of other United Methodists to go to the world (to be) a mighty river of grace, mercy and transformation."

In a eulogy, the Rev. Robert Huie, a close friend and former neighbor, said, "Clint's God was always getting bigger."

Rabb could pound out hymns such as "Precious Lord, Take My Hand" on the piano with a jazzy beat, and take similar great pleasure in helping start house churches in Southeast Asia, Huie said.

If someone said Rabb thought outside the box, "Clint more than likely would say, 'What box?'"

Huie told mourners that Rabb would want to tell each of them that he loves them with all of his heart and mind and soul. "And his love endures forever," Huie said.

In a spirited part of the service, the gathering sang along to guitar accompaniment several verses of "Peace Like A River."

Hands began clapping throughout the church as celebrants sang:

A life of service

Rabb, a Texas native, grew up in Hunt County, northeast of Dallas.

Clinton Rabb served as a pastor and chaplain for the denomination's Southwest Texas Annual (regional) Conference before joining the mission agency in 1996. Besides working with the mission volunteers program, he had been involved with new mission initiatives in Africa, Asia, Eastern Europe and Central Asia. He created the "In Mission Together Church to Church Partnership Program," which links congregations, annual conferences, volunteer efforts and mission personnel.

The family has started a charity, http://www.clintonclarkrabbcharity.org, in memory of Rabb. Memorial contributions should be designated to The Clinton Clark Rabb Charity. Checks can be mailed to P. O. Box 721115, Dallas, TX 75372.

*Briggs is news editor of United Methodist News Service, Nashville, Tenn. Bloom is a news writer based in New York.