The opening of the first regional office for the United Methodist Board of Global Ministries and Upper Room will strengthen the church’s work throughout Latin America, church leaders say.

Methodist and United Methodist leaders gathered April 2 in Buenos Aires to celebrate the inauguration of the office, which is to begin operation this summer.

“Our presence here in Latin America is an embodiment of our commitment to be engaged in mission from everywhere to everywhere,” said Bishop Hope Morgan Ward, president of the Board of Global Ministries. “There are no margins to God’s mission.”

It also will serve as a resource for United Methodist annual conferences and congregations, helping them be better informed about doing mission work in Latin America and the Caribbean, he said. “I would encourage local churches (and) volunteer teams to contact the office and make use of our presence here."

The office will provide leadership and support for Upper Room ministries such as the daily devotional guide, Walk to Emmaus and Companions in Christ, said Sarah Wilke, publisher of Upper Room Ministries, a unit of Discipleship Ministries. “All across Latin America, the Upper Room has teams that are working already. This office allows us to better serve them and help them grow.”

Bishop Frank de Nully Brown, who leads the Evangelical Methodist Church of Argentina, said the office will give his church and others around Latin America the opportunity to have stronger relations with The United Methodist Church. 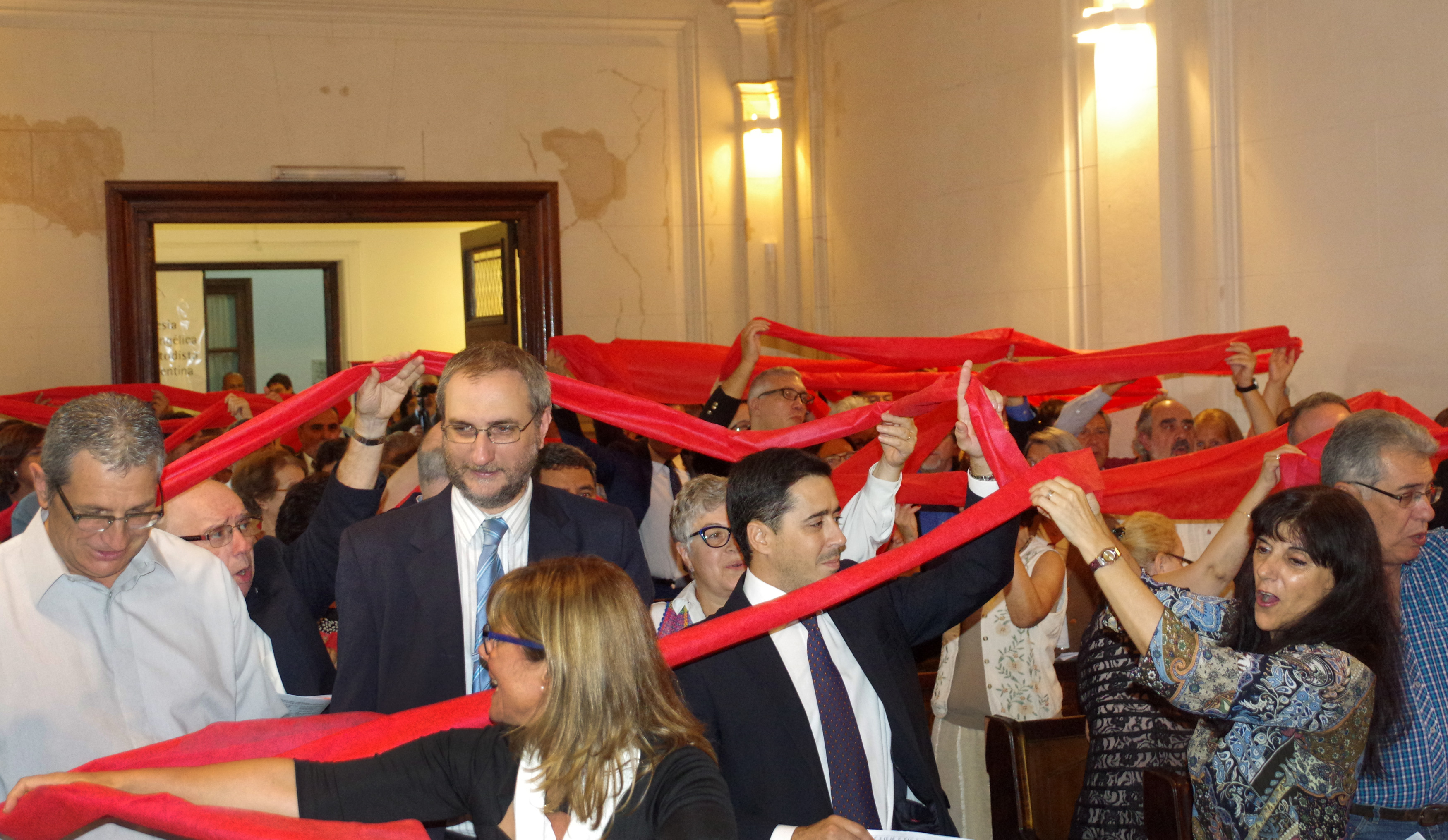 A red ribbon symbolizing the Holy Spirit is passed among the congregation during a worship service at the opening of the Global Ministries and Upper Room office in Bueno Aires, Argentina. Photo by Gustavo Vasquez, UMNS.

The Buenos Aires office is the first of several regional offices announced last year by Global Ministries. Others will be in:

The Upper Room has had a regional office in South Africa for 15 years, but the Buenos Aires office will operate differently. The new office will not publish the Upper Room nor be programmatic, but will focus on growing the work already existing in the region, Wilke explained.

Staff for the new regional offices are still being identified. The Rev. Mande Muyombo, based at Global Ministries’ headquarters, will oversee the agency’s work at all of the regional offices as leader of the new Global Engagement Unit.

The Buenos Aires office is in the former building of the Instituto Superior Evangélico de Estudios Teológicos, owned by the Evangelical Methodist Church of Argentina. During an April 2 worship service celebrating the office, the institute’s small chapel was filled to capacity with more than 100 church leaders and members.

Several missionaries said the new office would provide important support for their work and strengthen church communities. Global Ministries and the Upper Room “will be able to push a movement of building missionaries and leaders for the church,” said Paola Ferro, a Global Missions Fellow for the board in Buenos Aires.

Bishop Ken Carter of Florida described the need for the church to go beyond autonomy and distance to form more meaningful missional relationships, and he said the new presence in Argentina is “a great blessing” for the denomination.

The opening of the office is a step in Global Ministries’ transformation into an agency that is a facilitator of mission around the world for The United Methodist Church, Kemper said.

The regional office is not an outpost for the denomination, but rather “a solidarity presence,” Kemper said. The church is coming to the region to learn as much as to share, he said, and to hear the voices of Latin America and bring them “to the table of our mission conversation.”

“We are here to be in God’s mission and to create communities of faith, and it’s not about The United Methodist Church as a church, but it is about Christ’s mission in this world.”

The gathering included bishops or other top church leaders from Argentina, Brazil, Chile, Uruguay and the United States, and Argentinian government officials. Missionaries from Uruguay and Paraguay, a Brazilian missionary working with United Methodist Women, and representatives from the Florida Conference and United Methodist Communications also attended.

Tanton is executive director, Global Voices, News and Information for United Methodist Communications. Reach him at [email protected] or 615-742-5472.